As the founder of NYC Together, Dana Rachlin ’08 is reshaping communities by helping build positive relationships between Brooklyn police officers and local teenagers. 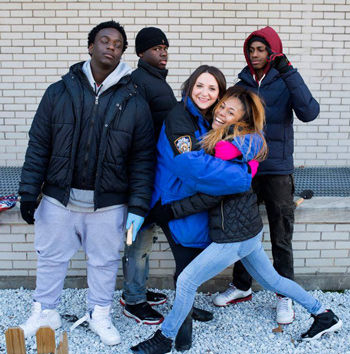 When Dana Rachlin ’08 graduated from Manhattan College, New York City’s job market was in distress, having already incurred the damaging effects of the global financial crisis. Prospects for landing a full-time position were slim that summer and in the months afterward, so she began volunteering.

Culminating a serendipitous near-decade of work in the social advocacy and criminal justice realms, the alumna founded NYC Together, an alternative-to-suspension program for adolescent students facing school disciplinary action.

Two years after its launch in March of 2015, the nonprofit serves approximately 50 teens per week in the Brownsville, Bedford-Stuyvesant, Crown Heights and Williamsburg neighborhoods of Brooklyn, where an unlikely bond has been forged between the local police in New York City’s outer boroughs and young adults facing challenges in the areas they protect and serve.

The mission of NYC Together is to steer the 14-18 year olds away from trouble by helping them to develop positive relations with local law enforcement. To do that, they are paired with NYPD officers for weekly discussion groups that focus on decision-making, conflict resolution, goal-setting, healthy relationships, social-emotional literacy, and other healthy practices. Rachlin has raised private funding for an array of experiential learning opportunities, which in the past have included a study abroad trip to India, and New York City-wide excursions to Broadway, Carnegie Hall, and numerous art museums. This summer, three students will be venturing to Italy.

The police-youth groups have also worked together to improve the physical appearance of the local police precincts (NYC Together currently is established in the 73rd, 77th, 79th and 90th), by growing community gardens and installing artwork on the walls outside. At the 90th Precinct in Williamsburg, a mural outside the building now proudly depicts a colorful rendering of the Brooklyn Bridge.

These and other activities allow youth participants of the program to see the officers as peers, collaborators and mentors, who, in turn, have attended parent-teacher conferences at school, and shown their support from the sidelines of basketball games and boxing matches in which the teens might be participating.

Although NYC Together is technically geared toward bettering the futures of its youth participants, its efforts benefit the entire community.

“I always refer to the teens we serve as change agents. They’re changing the lives of officers, and educating them on the challenges they are personally facing. As a result, this affects the approach officers take to young people they interact with in the neighborhoods,” says Rachlin, who began her career working as a New York state-certified rape survivor advocate for Safe Horizon, a victim-services nonprofit.

Knowing the alumna’s educational and professional backgrounds, it’s easy to understand how NYC Together came to exist. She was a double major in peace studies and government at the College, where she adopted a powerful mindset she shared with current Manhattan students at a recent event. In February, Rachlin gave a talk at the on-campus induction ceremony of Pi Sigma Alpha and Sigma Iota Rho, the honor societies for government and politics and international studies majors.

“School isn’t here only to teach you something; it’s here to inspire you to learn. I think that’s how I view a lot of my interactions in the world. Every event, every person, every experience, I am inspired to learn and grow,” she told the students.

In a number of roles Rachlin has assumed so far in her professional life, this passion has allowed her to carry out various grassroots initiatives on the support of local businesses. She previously acted as director of development for the Greenpoint Chamber of Commerce in Brooklyn, for instance, and worked in various community-building capacities for the Center for Court Innovation (CCI), which works to strategize new ideas and programming to improve and reform the justice system in New York City.

Along with these experiences and those within the areas already positively affected by NYC Together, Rachlin hopes to eventually expand the nonprofit’s reach to all of the city’s boroughs. But that’s not to say she isn’t content with the success already achieved by her “change agents.”

“I feel like the luckiest girl in the world sometimes. The resources I’ve obtained are beyond my wildest dreams,” she says. “Our organization has become a part of achieving slow-motion miracles.”