A budding pop star on two continents, Ali Isabella ’19 is studying the business of music at Manhattan College. 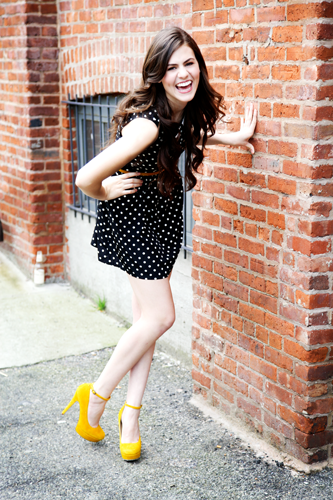 Ali Isabella ’19 is a lot like most Manhattan College freshmen. She loves spending time in New York City’s trendy Meatpacking and Chelsea neighborhoods, listens to Taylor Swift and Adele, and sometimes has trouble waking up for 8 a.m. classes.

Early mornings are especially tough for this communication major from Bronxville, N.Y., because she’s often putting in late nights performing at some of the city’s best live music venues, from Carnegie Hall to the Gramercy Theatre.

A singer-songwriter who grew up listening to everything from Frank Sinatra to Madonna, Ali already has quite a few accolades for a 20-year-old musician.

At just 16, she opened for Reba McEntire and Lonestar at Wembley Arena in London, becoming the youngest singer to perform at the famed venue. Singles from her 2012 debut album made it onto top charts on two continents — What If reached No. 13 on the UK’s Hotdisc charts, and New York City Country Girl hit No. 14 on the Billboard Hot 100 Singles Sales chart and stayed at No. 1 for four weeks on the Billboard Country Hot Single Sales chart.

More recently, Ali traveled the country with the Official Stand Up Tour, and continues to grace the stages of underground locales like The Bitter End, Webster Hall and Cafe Wha?, to name a few.

But one thing was missing from her growing résumé.

“About a year ago, I decided I really needed some structure, and I felt like I should learn about the business side of my music,” Ali says, of her decision to start at Manhattan College. “I was feeling stuck, and I needed to figure out how to better market and advertise myself and my music. And it's something that really had to come from me, and no one else.”

Motivated by her love for music, Ali says that her education is especially important now that she’s ready to head back into the recording studio and release an EP (extended play). She says Manhattan, with its small classes and intimate community, was a natural fit.

“I like to say that Manhattan College chose me,” she laughs, relating its friendly atmosphere to another place close to her heart.

“I used to take trips down to Nashville every month or so to learn songwriting with friends in the industry. Country music is really where I started,” she says. “It's a very homey, safe community down there for young, up-and-coming artists.”

While her roots will always be in country, Ali says she’s excited to transition into a style she calls ’80s dream pop. Inspired by what she grew up listening to, her new sound will incorporate elements reminiscent of Madonna, Michael Jackson, Phil Collins and David Bowie.

“If you look back at the structures of songs in the ’80s, all of my songs come out written that way. I just love that super-catchy sound, everything about that era,” she says. “So I want to kind of take the ’80s and make it my own, modernize it a bit.” 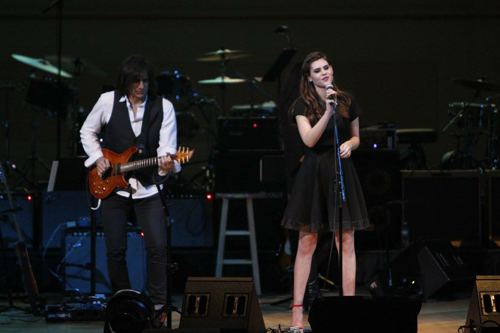 In February, Ali played to a packed house at Carnegie Hall as part of Lead Belly Fest, a tribute to legendary blues musician and songwriter Lead Belly. Getting to meet rock ’n’ roll icons Buddy Guy, Eric Burdon and Marky Ramone was a surreal experience, she says. But the best part was simply getting to perform for an audience — albeit, a big one.

“My favorite part is always performing. I love sharing my stories with people through song,” Ali says.

New York will always be a special place for Ali, but in a few years, she sees herself in the UK, continuing to build a fanbase in a slightly smaller, less competitive market. In fact, over Thanksgiving break, she flew to London to start working on new material with a producer, and has plans to go back this summer. Her ideal gig? Touring with The 1975, Jess Glynne or James Bay — all artists from the UK, she notes. Although, don’t rule out Taylor Swift just yet.

“Obviously, that would be fun! It would be fun to tour with really any artist that loves performing as much as I do,” she says. “I’m just going to keep working really hard hoping that around the corner I'll get my big break.”