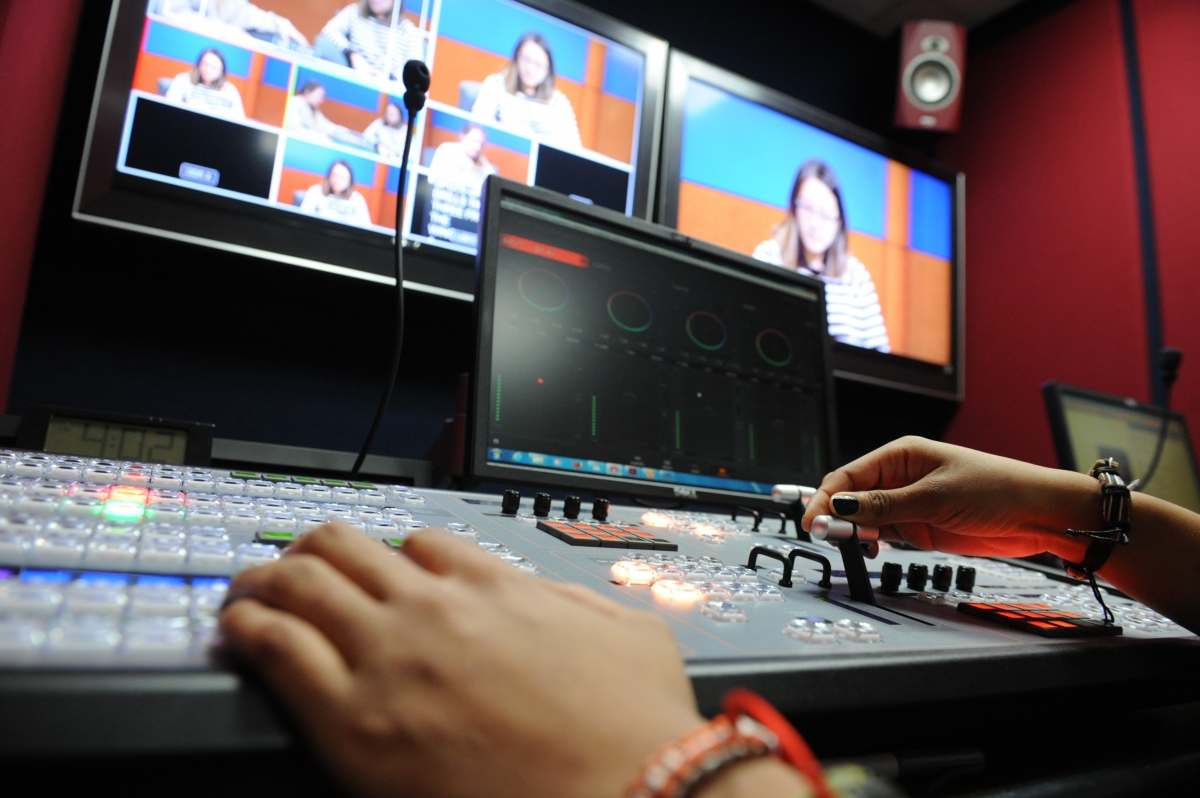 Kelly Burns ’17 is spending two days a week this semester on set of The Dr. Oz Show, where she’s a production intern working with the television industry’s most cutting-edge video equipment. Back on campus, she’s enrolled in Advanced Television Production (COMM 419), where, in the Leo Hall communication lab, she’s learning to record on cameras that generate images at 4,000 pixels — 16 times the resolution of standard-definition quality.

“Since I’ve started learning on 4K cameras, which is what producers [on the Dr. Oz Show] operate on, I’m learning there too, and am using those skills in the Leo communication studio,” says Burns, who is one of many students this spring to have shot and edited footage in the College’s broadcasting studio.

As of this semester, the space is equipped with three new Blackmagic Studio 4K cameras and a Blackmagic 4K 2-M/E video switcher, which allows for a wider variety of shooting techniques. Students can also fine-tune footage they’ve already shot with Pro Tools multi-track digital software and the full Adobe Creative Suite.

The College’s decision to upgrade to 4K technologies from the standard-definition quality it’s been outfitted with since 2008 was a leap — both for the institution as a whole and for students taking advantage of its resources.

Manhattan is the first higher education broadcast studio to operate at this level in the greater New York City area, which equips students with the know-how to excel in future internships and entry-level jobs. Associate professor of communication Michael Grabowski, Ph.D., who is teaching COMM 419 in the two-floor lab, says the 4K technologies were added to prepare all students — whether their dream is to work in front of or behind the camera — with the skills to play any role in a professional broadcast studio.

“Our goal is to teach on equipment that’s used by the pros, so that our students will walk in on day one of their first job or internship and feel comfortable,” Grabowski says of the space, which is also the location of this semester's Studio Television Production (COMM 308) course being taught by Robert Coleman, an adjunct professor and coordinator of media and technology for the Communication department.

In the future, Grabowski plans to host as many outside clients as possible to film and edit video in the lab, so that students can see what it’s like to be part of a working production. In February, he set that plan in motion when members of the Upright Citizens Brigade, an improvisational comedy troupe in New York City, came to campus to shoot segments for the upcoming web series, Funhaus. There, his students assisted the shoot's on-site producer, cameraperson, production assistant and boom operator.