George Sheehan dedicated much of his life to the pursuit of excellence as a competitive runner. 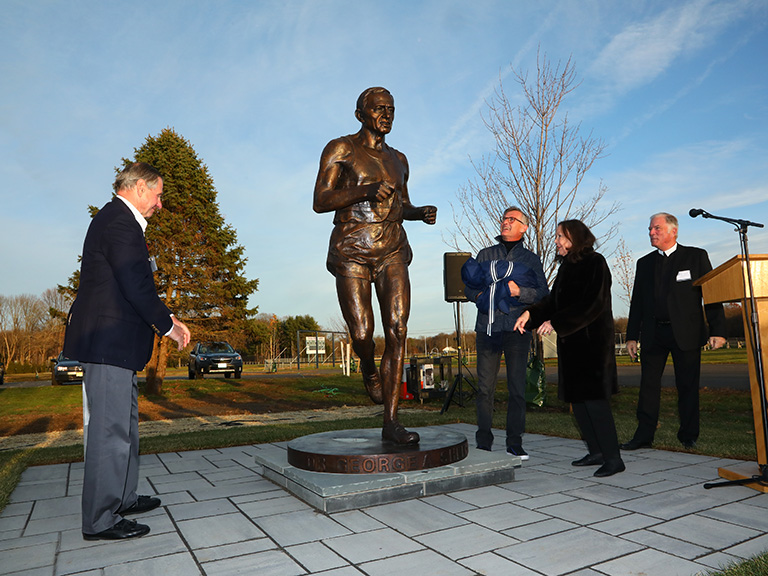 George Sheehan ’40, M.D., a Jaspers track and field star, is remembered for his enduring contributions to the sport that he loved. On December 4, the Christian Brothers Academy (CBA) in Lincroft, New Jersey, celebrated his legacy by dedicating a statue of Sheehan dressed in a Manhattan College cross country jersey, a larger-than-life tribute to a man who dedicated much of his life to running.

In 1959, with help from the Brothers of the Christian Schools, Sheehan, a respected cardiologist, became one of three founders of CBA, where he is now immortalized in bronze. The seven foot tall statue is a gift from the Sheehan family to the school and is near the new track and field facility that bears his name: the Sheehan Track & Field Complex. The statue was created by Brian Hanlon, who in 2015 was named the official sculptor of the Naismith Memorial Basketball Hall of Fame.

Years later, the elder Sheehan rediscovered his youthful passion for running and at 50, he ran a 4:47 mile, which was the world’s first sub-five minute time by anyone of that age. In 1989, he set the national men’s indoor 1,500-meter record for age 70 and over. When the running craze took off in the 1970s, Sheehan began documenting the phenomenon,writing eight books including Running & Being: The Total Experience, a New York Times bestseller. He was the medical editor of Runner’s World and served as a consultant to the President’s Council on Physical Fitness. He passed away in 1993, at the age of 74.

"George Sheehan left a powerful legacy as an accomplished track and field athlete during his years at Manhattan College more than 80 years ago and that legacy can still be felt today,” said Kerri Gallagher, director of cross country, track and field at Manhattan College. “His dedication to the sport demonstrates that completive running can continue long after graduation. It’s something that young runners can continue to develop and train for throughout their entire lives.”

“Dr. Sheehan had a tremendous influence on the entire running world, including helping jump-start CBA’s consistent dominance in cross country and track,” said Ross Fales, president of CBA in Lincroft. “This statue will immortalize his founding contribution to CBA and serve as an inspiration to our runners and other athletes.”