Their careers in education at Manhattan College have been dedicated to leadership and service. 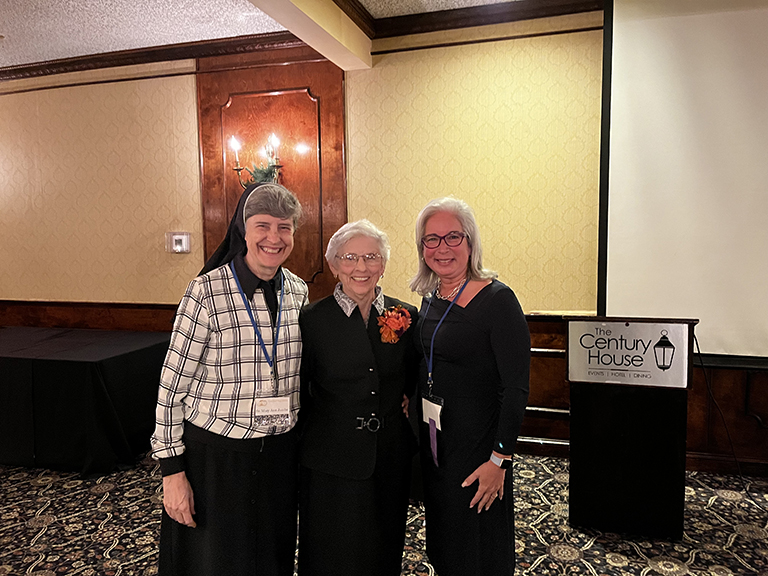 The prestigious honor recognizes those who have dedicated their careers to the support of Catholic education in the Empire State. Sr. Remigia’s award was presented at the CSAANYS’s 50th-anniversary celebration dinner in November and her selection was based on the impact that Manhattan College’s graduate educational leadership program had on generations of Catholic school administrators. Among the seven 2022 “Lighting the Fire Award'' recipients was Cardinal Timothy Dolan.

“The Lighting the Fire for Catholic Education Award that I received cannot be credited to me alone,” said Sr. Remigia. “Every graduate of the leadership program has made a world of difference to their educator colleagues and to the children and families they serve in New York State and throughout the U.S. My honor is their success.”

Fatima Decarvalho-Gianni ’93, a former student of Kushner’s and an executive board member of CSAANYS, presented her former professor with the award. Carol Cimino, another prominent member of CSAANYS, and an adjunct professor in the Manhattan College educational leadership program, also received the Lighting the Fire Award.

“It could not be more gratifying than to be in the Manhattan College community at this time when the support and continuation of the Lasallian educational mission is acknowledged,” Sr. Remigia said.

While not an alumna of the Lodi, New Jersey, all-girls high school, Sr. Mary Ann has been affiliated with ICHS since 2008. She has served as a member of the school’s board of trustees, is a founder and active member of the academic excellence committee, and serves as a presenter of professional development for the faculty and staff.

“I was honored to be chosen for induction into their Hall of Fame,” said Sr. Mary Ann.  “I believe in the mission of ICHS and how it educates and transforms students into young women of competence, compassion, and commitment in the Catholic Felician-Franciscan tradition of leadership and service.”

Sr. Mary Ann believes that the values prized by ICHS are similar to the Lasallian values taught at Manhattan College.

“The high school’s values of respect for human dignity, compassion, and transformation that encourages an open mind and heart, are central to my own core beliefs,” she said.

Sr. Mary Ann is an alumna of Felician University in Lodi, New Jersey, and has taught at all educational levels. She is a Sister of Christian Charity of Mendham, New Jersey.

The School of Education & Health

We foster our students’ hearts and minds in close-knit classrooms, preparing them to be teachers, counselors and health professionals who will lead and empower the next generation.
Learn More