The Manhattan College graduate received a short-term award from the Fulbright program. 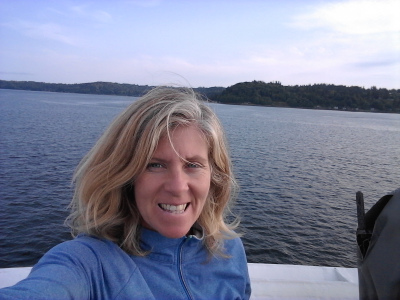 Heather O’Connell ’02 has received a Fulbright Distinguished Award in Teaching short-term grant to Spain from the U.S. Department of State and the J. William Fulbright Foreign Scholarship Board.

The award allows O’Connell to work within the regional education center in Santiago de Compostela, Spain to develop and enhance STEM curriculum. During her time in Spain, she will offer a workshop to local teachers to inspire STEM teaching.

O’Connell, who teaches at West Hawaii Explorations Academy (WHEA) in Kailua-Kona, Hawaii, is one of approximately 20 U.S. citizens who will travel abroad through the Fulbright Distinguished Awards in Teaching short-term program in 2018-19. Recipients of Fulbright grants are selected on the basis of academic and professional achievement and demonstrated leadership potential.

O’Connell graduated from Manhattan College with a degree in biochemistry in 2002. After beginning her career analyzing pharmaceuticals at Pfizer and conducting sleep research with Weill Cornell Medical College, she decided to pursue teaching and received a master’s degree in education from Pace University in 2007.

After three years of teaching in New York and working with service groups that included Habitat for Humanity, O’Connell moved from Long Island to Hawaii. She soon ended up at WHEA, a charter school with a shark lagoon on site. At WHEA, O’Connell teaches trigonometry, pre-calculus and an after school chemistry class. She also advises science projects, including a project where students monitor the population of urchins at a marine life conservation district.

“I love providing the opportunity for students to collect real data,” O’Connell said. “Some of my favorite parts about my job are learning alongside students, as I knew nothing about plumbing a marine tank before WHEA and working with such a great team. When I am teaching students how to be stewards of the land through the lens of science and math, I feel as if I am pursuing my passion in life. It fulfills me greatly.”

About The Fulbright Program

The Fulbright program is the flagship international educational exchange program sponsored by the U.S government and is designed to build lasting connections between the people of the United States and the people of other countries. The Fulbright program is funded through an annual appropriation by the U.S. Congress to the U.S. Department of State’s Bureau of Educational and Cultural Affairs. Participating governments and host institutions, corporations, and foundations in foreign countries and the United States also provide direct and indirect support to the program, which operates in over 160 countries worldwide.

Since its inception in 1946, the Fulbright program has provided more than 380,000 students, scholars, teachers, artists, professionals and scientists the opportunity to study, teach and conduct research, exchange ideas, and contribute to finding solutions to shared international concerns.

Fulbrighters address critical global challenges in all areas, while building relationships, knowledge, and leadership in support of the long-term interests of the United States. Fulbright alumni have achieved distinction in many fields including 59 who have been awarded the Nobel Prize, 84 who have received Pulitzer Prizes, and 37 who have served as a head of state or government.

The Fulbright Distinguished Awards in Teaching program sends U.S. teachers abroad and brings international teachers to the United States for a semester of independent study and professional development focused on sharing international best practices and developing students’ global competence. Based at university-level schools of education or other educational institutions in the host country, participants complete an inquiry project, take courses, share their expertise with local teachers and students, and engage in action planning to implement what they learn on the program when they return home.