As Jean Donahue steps into her new role at Bronx Science, she plans to expand computer science and engineering programs. 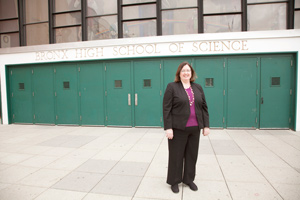 Jean Donahue ’81, ’03, never imagined she would become principal of the high school she attended in the 1970s, The Bronx High School of Science (Bronx Science).

Fast forward nearly four decades, and Donahue has spent the past 17 years building her career in science and education at the school.

Tasked to lead the school in February, Donahue has hit the pavement running to continue transforming the specialized public school and preparing tomorrow’s leaders, especially in science and mathematics.

“One of the things that we’re focusing on is strengthening and expanding our computer science and engineering programs,” she says.

The school will offer additional post-AP computer science classes in the fall, including a class on application development for students to write apps for Android phones and a computer science robotics class.

“As a STEM school, our focus has always been science and math, and we want to also build our technology and engineering programs,” she adds. “So we’re looking at renovating labs and old shop spaces, and have made some connections with alumni who are working in the technology industry.”

Donahue’s career at Bronx Science started in 1997, as a teacher working with students conducting research projects. Shortly after, she became the head of the Biology department, and eventually head of the Physical Science department before being appointed interim acting principal in September 2013. Donahue was also honored with the Sigma Xi Outstanding High School Teacher Award in April 2010.

She brings a unique perspective to the job as a parent of a 2010 Bronx Science graduate and wife to an alumnus. Donahue’s daughter attended Bronx Science, and her son attended Regis High School in Manhattan.

“I think it really helps me see things from the students’ and the parents’ perspectives, and it made me aware of some of the changes that needed to be made,” she explains. “For example, we’re looking at increasing our freshman guidance program because the transition from middle school to an academically rigorous and large high school is something that some of the students need help with.”

Donahue spent some time in the midst of her early years at Bronx Science serving as an adjunct lecturer at SUNY Albany and an instructor at the College of Mount Saint Vincent in the Chemistry department.

Prior to starting at Bronx Science, she also worked for Barnard College as a visiting assistant professor, instructor and laboratory associate in the Chemistry department.

In addition, she was a research assistant and chemist at the Naylor Dana Institute for Disease Prevention, a unit of the American Health Foundation. Throughout her career and research, Donahue has published a variety of papers on topics ranging from in vitro DNA replication to cancer research.

“In terms of research, I actually got my start at Manhattan College when I was an undergraduate in Organic Synthesis with Dr. John Wasacz,” she adds, while studying for her bachelor’s in biochemistry.

In fact, Donahue received her Professional Diploma in School Administration from Manhattan College in 2003. She earned a master’s in chemistry from Carnegie Mellon University, and both a doctorate and a master’s in basic biomedical sciences from New York University’s Sackler Institute of Graduate Biomedical Sciences.

The tremendous experience that Donahue had at Manhattan encouraged two of her sisters to also attend the College. Being the oldest of six children and growing up in Riverdale, the family was quite familiar with the College. Deirdre Donahue Williams ’86, ’90 and Tara Donahue Clyne ’90, ’93, followed their big sister’s lead, and both graduated from Manhattan College with bachelor’s and master’s degrees.

“My memories of Manhattan College really focus on the people that I met at the College and the connections that I made there,” Donahue says. “I really found that the professors connected with the students.” 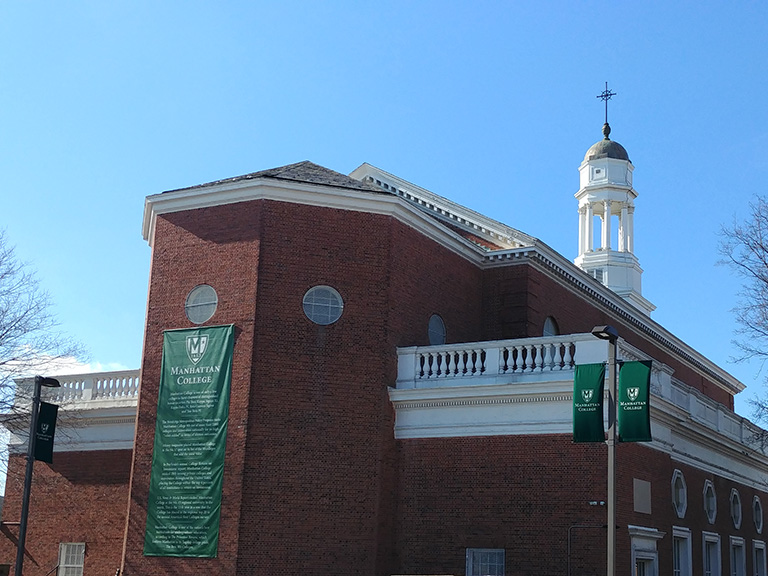