William Fife ’67 received the American Society of Civil Engineers’ 2014 Metropolitan Section Civil Engineer of the Year Award for his years of service. 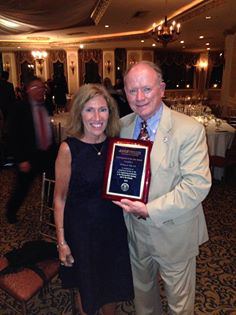 Just one day after graduating from college, civil engineer William Fife ’67 began his 30-year career with the Port Authority of New York and New Jersey (PANY&NJ), and has since played a crucial role in the development of the region’s major aviation projects.

Often called the grandfather of JFK’s AirTrain by his peers at PANY&NJ, Fife was instrumental in the planning and creation of the eight-mile train, as well at the redevelopment of LaGuardia and JFK airports.

The American Society of Civil Engineers (ASCE) recently recognized Fife’s career and accomplishments’ with their most coveted award, the 2014 Metropolitan Section Civil Engineer of the Year award. The ASCE honored Fife’s, “character, professional integrity and years of outstanding service to the civil engineering profession.”

Fife started with the PANY&NJ as a trainee in 1967 and spent 30 years with the organization ultimately advancing to general manager of Aviation Planning and Technical Services.

“From my mind, I wouldn’t have received the award last month without the lessons learned from many of those that I worked with over the 47 years since I graduated from Manhattan and joined the Port of New York Authority, as it was called in 1967,” Fife says.

During his time at the PANY&NJ, Fife also spent a few years serving as deputy general manager of JFK International Airport, and was responsible for the planning, maintenance, construction, and the business and security elements at JFK.

“In my mind, it’s really the greatest and most complex airport in the world,” he adds. “While I was at JFK, we were able to move from one of the poorest categories to one of the most improved when surveys were conducted.”

He also was instrumental in establishing the Peer Review Group 25 years ago, which today has global participation from more than 150 airports. The peer review is comprised of employees in public service including the FAA, TSA and airlines, and allows them to share information on airport projects and lessons learned. Most recently, the group met to discuss a possible PATH train extension to Newark Airport.

After retiring from the PANY&NJ in 1997, Fife became corporate vice president and director of aviation for the engineering design firm AECOM, where he served for more than a decade.

At AECOM, he had the opportunity to learn about the consultant side of the business and provided peer review services to airports around the world.

In 2000, Engineering News-Record (ENR) magazine honored Fife with the Newsmaker of the Year award, and he also was presented with a certificate of appreciation from the United States Department of Transportation Federal Aviation Administration Eastern Region in 2003. CNN¸ FOX News and ABC News also have used Fife as an on-air aviation industry expert.

Since retiring from AECOM, he has continued working as a consultant for the aviation industry to Weidlinger Associates, IBEX Construction and other firms.

Fife is also sharing his knowledge and working with various organizations by mentoring young engineers within the National Association of Professional Women in Construction (PWC), where he serves as board emeritus. In addition, he assisted with the construction for the new home for the Lighthouse for the Blind, and has been the chair of the ASCE Met Section Air Transport conference for the past 17 years and the annual guest speaker at the UC Berkeley’s Airport Planning course.

“I do it because it’s part of what I learned at Manhattan, to be a leader and make a contribution to help others,” Fife says.

As Fife reflects on his 47-year career — which continues today — he remembers fondly the values and education he received from Manhattan College as his start in the industry. He also credits much of his experience and training to Manhattan College’s Air Force Reserve Officer Training Corps (AFROTC) and to his service in the USAF where he was a captain and a bio-environmental engineer.

Fife graduated with a B.E. in electrical engineering from Manhattan, and married his college sweetheart shortly after graduation. Fife met his wife of 46 years, Pat (néeDeAngelis), at a Manhattan College tea dance in Thomas Hall. They have three children, a doctor, lawyer and nurse practitioner.

“I think my most important takeaways from Manhattan College are the leadership skills I learned in the Air Force ROTC being a lieutenant colonel in the wing staff,” Fife adds. “When you have 1,100 cadets, you learn how to manage things, and I also learned how to do the right thing for others from the Brothers I had at the College.”