Stephen Ribuffo ’77 plays a crucial role at the Port of Alaska in Anchorage.

In a cold-weather climate like Alaska’s, to say that Stephen Ribuffo ’77 has an important job would barely be scraping the ice. For more than a decade, the College alumnus has directed all waterborne freight — gasoline and heating oil, plus diesel, cement, business supplies, and more — crossing the docks at the Port of Alaska in Anchorage. Ribuffo and his staff of 25 also ensure that the infrastructure is available to safely support commerce in Alaska regardless of weather conditions. 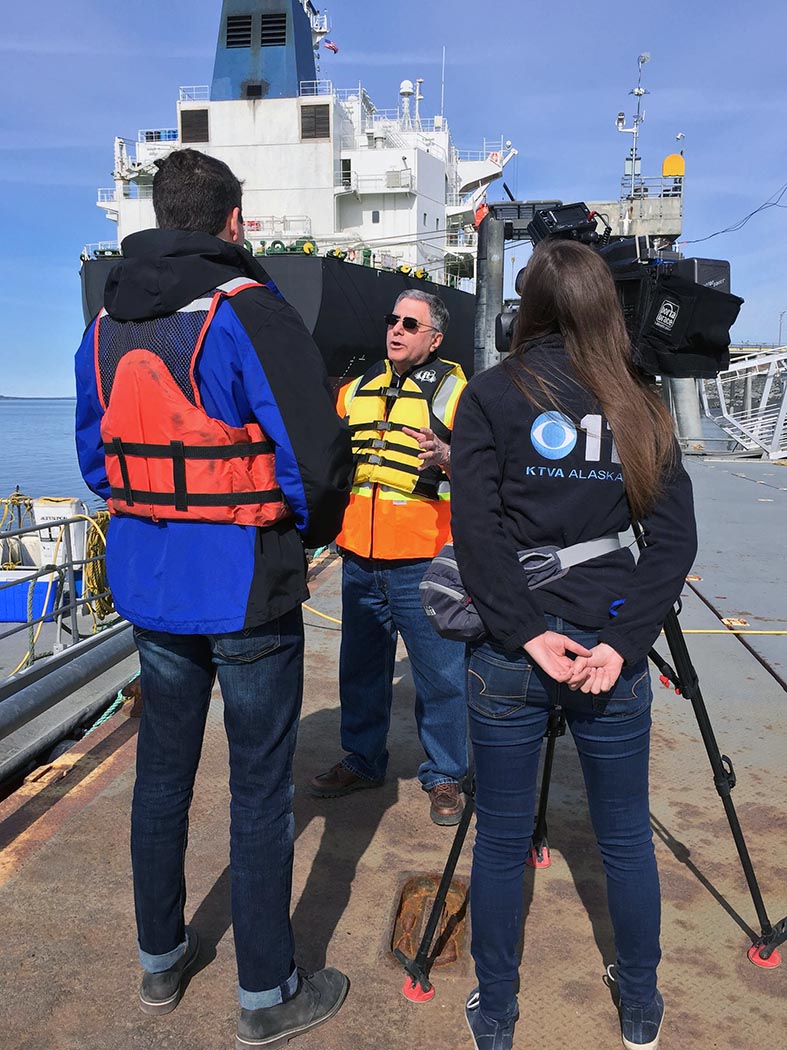 To put that percentage into context, the Port of Alaska fields nearly four million tons of fuel and freight annually, commerce that’s in direct support of 85 percent of Alaskans.

Ribuffo has worked at the port since 2007, upon his retirement from the U.S. Air Force. Since then, his military background has regularly intersected with his day-to-day responsibilities. As one of just 19 commercial ports in the nation designated as a Department of Defense Commercial Strategic Seaport, the Port of Alaska assists with Army deployments and redeployments of cargo.

His background is also the reason Ribuffo landed the job in the first place.

“As a colonel, I was tasked by the general responsible for Alaska operations to oversee some land transfers from the Department of Defense to the city of Anchorage,” he remembers. “The Port was doing some expansion work, and wanted some property that abutted the military base. I found myself running the process of transferring all that land from the DOD to the city, an experience through which I met everyone down at the port.  So, you never know when you’re networking.”

During his 30-year career with the Air Force, Ribuffo served in California, Michigan, Ohio, and in the 1990s, spent time in Germany, Korea, Turkey and Alaska. Before that, the Air Force sent the second lieutenant to navigator training in California to learn how to fly B-52s and other planes. He met his wife, a former Air Force nurse, in the Upper Peninsula of Michigan.

While stationed at Edwards Air Force Base in Kern County, Calif., Ribuffo received an MBA from Golden Gate University. Shortly after earning his degree, he was offered the opportunity to pursue another graduate degree in logistics, from the U.S. Air Force Institute of Technology. From there, he was able to gain insight into other career areas, with the assistance of seasoned professionals who helped to guide him.

“I got the opportunity to obtain a really good breadth of experience and exposure to all logistics-related fields,” Ribuffo says. “I had a lot of good mentors who helped along the way.”

The skills Ribuffo built in the Air Force and now at the port originally developed at Manhattan College, where he studied marketing, and was a member of the Air Force Reserve Officer Training Corps (ROTC) program. When he wasn’t commuting to campus, he was working in the evenings at his neighborhood grocery store.

As he looks back on all the experiences that have shaped his life thus far, Ribuffo considers each one to be formative for a different reason, but that his Riverdale roots have been particularly influential.

“Every experience in life kind of shapes who you are, and I like the fact that I went to school in New York,” says Ribuffo, who was born in Brooklyn and grew up in Port Chester, N.Y.

“Unless you have been out there and lived in other parts of the world, you have no idea what survival skills you develop, and you didn’t even know it was because you grew up in New York.”