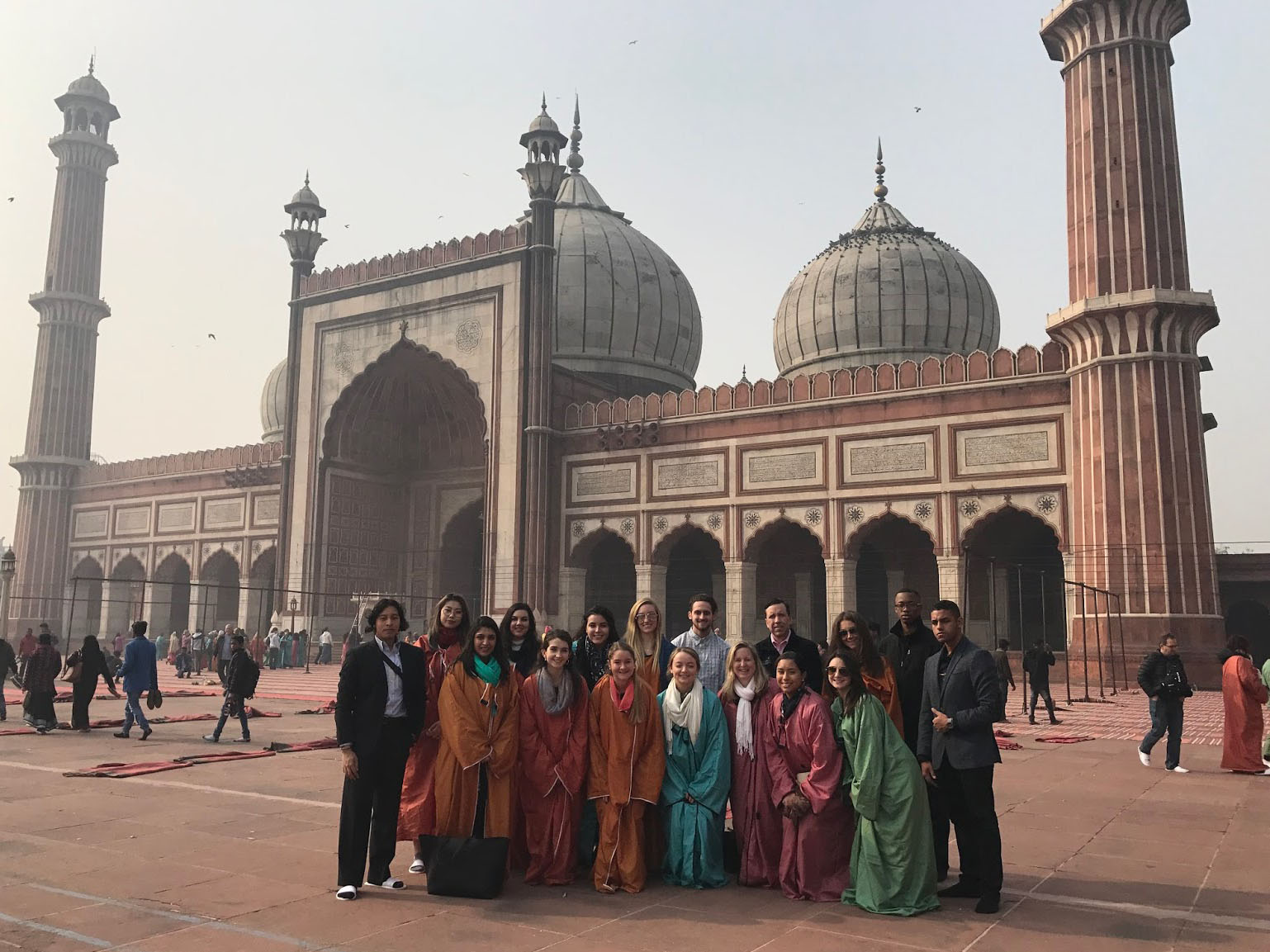 No book or film can fully prepare first-time visitors to experience the funky smells and thunderous crowds, bright colors and big flavors of India. So in January, a cohort of business students took the ultimate cultural and academic leap, arriving in Delhi to explore one of the world’s fastest growing economies first hand.

Led by Grishma Shah, Ph.D., associate professor of marketing and management, as well as Aileen Farrelly '95 CPA, MS, assistant dean and accounting professor, the group of five MBA students and ten undergraduates set off for the 7,000-plus mile journey as the first part of their spring semester courses, International Field Study Seminar (GLBL 414) and Going Global Seminar (MBAC 642 ).

After spending nearly 24 hours in transit, the cohort shook off jet lag with some sightseeing, and visited the Swaminarayan Akshardham temple, the Red Fort and Jama Masjid mosque, as well as the Mahatma Gandhi memorial before taking in a show at Kingdom of Dreams. Along the way, they began to get a feel for India’s bustling, bursting economy.

“Storefronts are piled on top of each other, and the streets are packed with rickshaws, taxis and trucks carrying goods,” says John Farrelly ’19MBA. “It seems like anywhere that one or two people might pass, there is at least one stand selling something.”

It's a particularly unique moment in India’s development. As India prepares to exceed China as the world's fastest growing economy, the nation is endeavouring to solve its biggest problems — education and urbanization, health and sanitation, and gender equality — to make growth more equitable. With limited governmental funding, startup companies and other entrepreneurs are increasingly leading the charge.

To investigate this trend on the ground-level, the cohort met with nearly a dozen businesses and non-governmental organizations (NGOs).

A Developing Nation and Economy Up Close

One of their first stops was the headquarters of Model Rural Youth Development Organization (MRYDO), an NGO that works with marginalized communities for their socio-economic, cultural and political empowerment. After meeting with key leaders of the organization, the cohort spoke to members of one the organization’s self-help groups that was created as a foundation for female entrepreneurship, assisting with loans and offering guidance. Many of the women had never been able to count money or socialize with other people outside of their homes prior to their involvement in the group.

“One woman who appeared confident and strong, told us that when she first started the group and her business, she was so intimidated by the bank and the men there,” says finance and global business major Caileigh Lampersberger ’18. “But once she was able to push through it, she found that the experience had inspired and empowered her, and now she runs the business confidently and has helped others feel empowered too and make a change in their lives.”

Being on-site and bearing witness to the conditions and specific challenges in India, from the rural north to the more metropolitan south, was an integral part of the learning experience. This was particularly the case as the group investigated innovative ways a variety of businesses and startups are making positive social impact and a profit, from a fabric boutique that supports rural craftsmen in Delhi to a waste management startup that collects trash and recyclables to generate fuels and reusable packages in Bengaluru.

“Rather than an office, we met with them where they worked. Some locations such as the trash and recycling center were extremely unsanitary,” says Elvis Rodriguez ’18, an economics and global business major. “Their challenges really hit you in the face upon arrival. It’s immediate. We would never have had the same impressions over a presentation or video call. Being there was necessary for a true understanding.”

Among these first-hand experiences was the cohort’s visit to Agra to tour the Taj Mahal. While exploring the seventh wonder of the world was undoubtedly life-changing, students agreed their experience at Sheroes Hangout — what was earmarked as a lunch stop — was just as transformative. The cafe and lounge is run solely by acid attack survivors who despite the debilitating blow to their appearance and self esteem have the courage to live and work in the midst of society.

While their food was prepared, the group watched a short documentary highlighting a few of the staff’s survival stories.

“This experience was one of the most moving things I have ever witnessed, as these women were still so positive and so kind-hearted after having gone through something so painful,” says marketing major Francesca Preti ’18. “Two of the women working at the restaurant sang songs for us. After we ate, the women informed us that there are no prices for the food, and that we only pay what we wish. I think this is a really incredible way to run a business.”

“This is definitely something I'll remember forever,” Carly Cummings ’18MBA says. “As much as I talk about it, I can't begin to explain the experiences that I've had. It's definitely a once in a lifetime opportunity that is invaluable.”

Consulting for a Cause

The trip may be over but the journey is just beginning.

Now that the cohort is back on campus, they are translating their experiences to the classroom. This spring, they will identify three to four of the organizations with specific needs, split into groups and hone their business consulting skills while developing real, actionable solutions. All deliverables will be presented to stakeholders at the end of the semester. No solution is too small.

“Whether it’s collecting and analyzing some data that may help [these startups] be more efficient or make a greater impact with what they’re doing, any little bit might be a huge help,” says Farrelly. “By visiting, we know how much a little bit can go.”