From RA to FDNY, Alumni Continue to Serve After Graduation 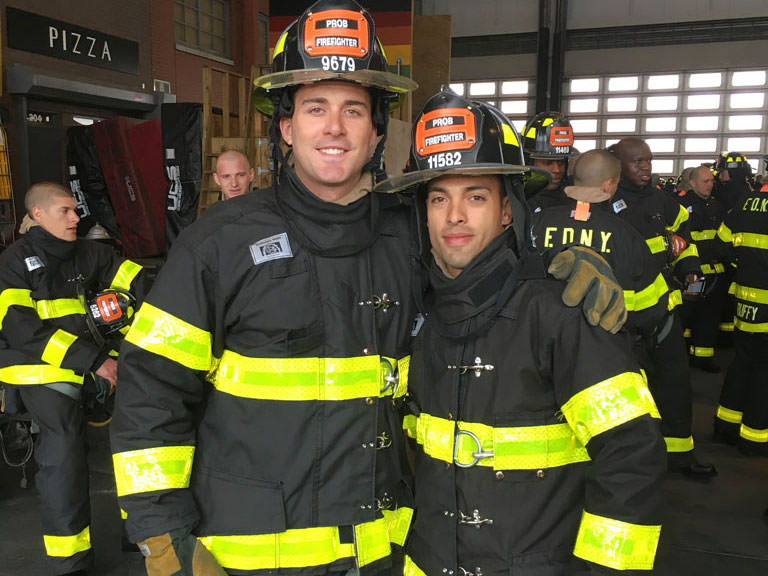 Out of 320 recruits training to become New York City firefighters, what are the odds that two Jaspers would be stationed in the same borough? Carlos Morales ’14 and Michael Scire ’13, who both previously worked as Resident Assistants (RAs), have found themselves working together again — this time in two Manhattan divisions of the New York City Fire Department (FDNY).

Morales, who earned a degree in mechanical engineering, reports to Engine 39 on the Upper East Side, and Scire, who earned a degree in physical education, is downtown at Ladder Company 3. Although they resided in different buildings at the College — Morales was in Overlook Manor, and Scire worked in Jasper Hall — they became friends during RA training the previous summer. They discovered a shared love for helping others and giving back to their school. After college, neither of them knew of the other’s plan to become an FDNY firefighter.

Scire had been inspired to work with the FDNY from an early age.

“I grew up in Brooklyn with an FDNY firehouse on my block. To say the least, I was spoiled as a young boy getting to see the fire trucks everyday,” he says.

Scire’s dream of working with those he idolized came true when he aced the exam to gain entrance into the academy.

Upon each of their arrivals, it took a few days for Morales and Scire to even recognize each other because their heads had been shaved for training. A reunion followed the first morning roll call when they bumped into each other and immediately began to reminisce about their Jasper experiences.

The rest is history. Morales and Scire completed a grueling 19-week preparation course and graduated with each other’s support and words of encouragement.

They both agree that their involvement in the RA program gave them ample preparation to succeed after graduation. This and other Manhattan experiences supplied them with the tools needed to become strong leaders and to lend a hand to those who need one.

“I’ve always enjoyed assisting others during their time of need, which is why I became a firefighter,” Morales says.