A growing two-day conference hosted by the School of Business places Manhattan College as a thought leader in the field of business analytics. 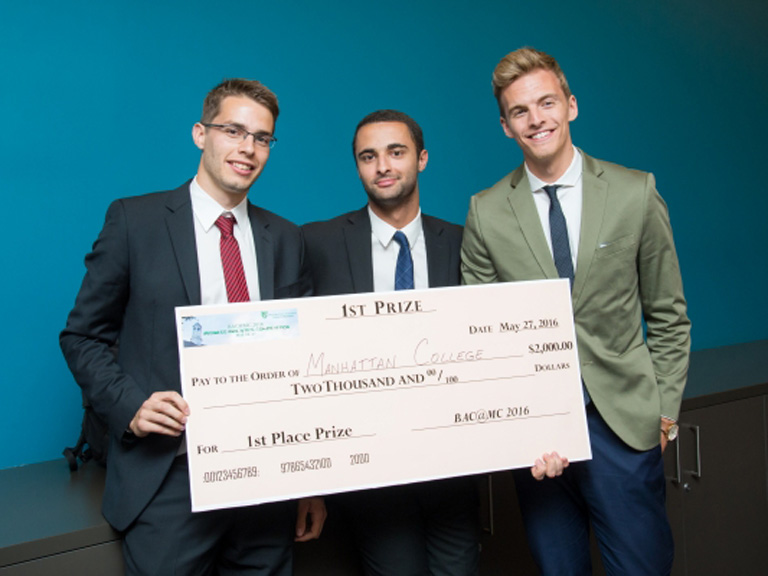 There’s no such thing as a home team advantage when you’re staring down a set of raw data and a panel of distinguished judges.

But the Jaspers didn’t need it at Manhattan College’s second annual Business Analytics Conference and Competition, which drew nearly 100 participants from 19 colleges and universities from the U.S., Canada and Palestine. The winners of the two-day competition were announced at Microsoft’s New York City headquarters Thursday night as the teams took advantage of being in the country’s financial capital to network with the industry’s top executives.

Despite stiff competition, computer science major Tylor Borgeson ’16, business analytics majors Dennis Eriksson ’17 and Marc Stefan Hoeller ’17, distinguished themselves in several different areas by bringing more meaning to the data, provided by Gilt.com. Their data visualization as well as their Gilt.com branded Powerpoint presentation earned them the title of first place and a $2,000 grand prize.

BAC @ MC features a two-phase competition, both of which require student teams to analyze, and glean business insight from a competition-specific dataset. Phase one began in February when the first set of data and questions were made available to the teams. Students worked at their home institutions analyze the data, develop solutions to the questions and prepare a poster to present at day one of the competition. Phase two began on the end of the first day of the competition, when the teams were provided with additional questions and data on a similar theme. Students then had approximately 20 hours to prepare and present their solutions to the judging panel on the second day.

“It’s a great opportunity for students to get hands-on experience in business analytics, and especially with Gilt.com,” says Eriksson. “Personally, I really like fashion and online sales, so I really enjoyed working with and interpreting the data sets. I learned so much — not only during the conference and competitions itself, but in preparation for the conference, from getting the data in January up until the very end.”

The week’s events also included a lively keynote from Anne Robinson, executive director of strategy and forward supply chain at Verizon Wireless, which kicked off the events on May 25 in the Kelly Student Commons.

Robinson has had an illustrious career at Verizon Wireless, and as former president of INFORMS, the largest international society in the world for professionals in the field of operations research, management science and business analytics. As a business analytics leader in the telecommunications industry, she gave participants some insight into what to focus on during the competition and throughout their careers.

“Beyond understanding the data for business purposes, the one thing I really don’t want you to forget is the soft side of things,” Robinson said, listing teamwork, project management, change management, communication skills, networking and practice as crucial experiences to succeed.

“The smartest group of people you will ever work with are in this room right now,” she said. “When you get into the company environment people of all different backgrounds — you need to be able to work together. Practice that here. Work with people you might not love, but you think are smart, and figure out how to bring those styles together.”

The winning team attributed guidance from their faculty adviser Musa Jafar, Ph.D., associate professor of accounting, law and computer information systems, to their victory. Eriksson, who has taken three classes with Jafar, said having a good relationship with him made all the difference. Jafar took the time to have one-on-one sessions with members of the team, teaching them how to use four to five different analytical tools.

“I was exposed to so many different analytics tools,” says Eriksson. “It was fun because we went to Microsoft; we met one of the people who is working on developing RStudio, and it was fun to meet and talk with people who are in charge of tools that we use in the field.”