Jeanette Settembre ’13 has been a reporter for the New York Daily News since June of 2013. 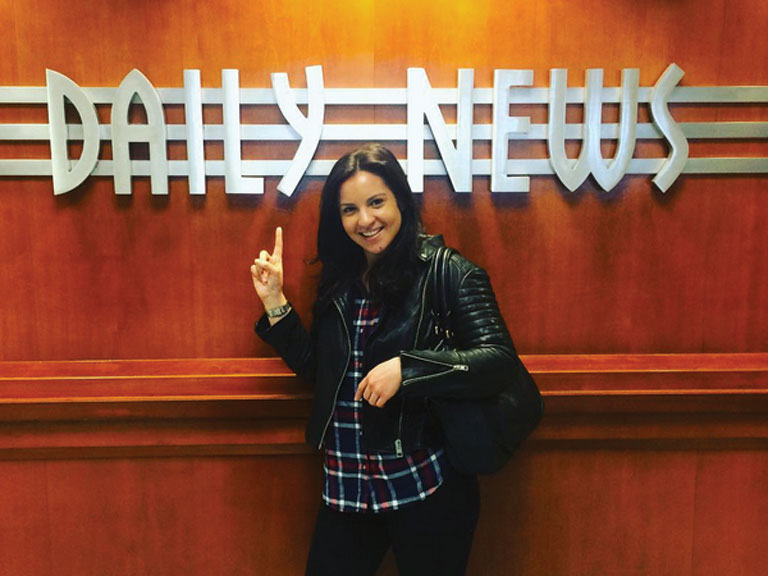 In one of her first stories written as editor-in-chief of the Quadrangle, Jeanette Settembre ’13 urged spring breakers to “take advantage of exciting expeditions not too far from home” by visiting downtown music venue, the Village Lantern, and other New York City locales.

Four years after that article and three after her graduation, Settembre continues to sing the city’s praises, but as a print and web features writer for the Daily News. At the famed New York newspaper, she’s reported on everything from Justin Bieber’s first Grammy win to the Santa Fe culinary scene, which had her sampling spicy green chilies and hand-rolling her own tamales. She learned this at the cooking school of a chef who was born and raised in that New Mexico city.

Here in New York, the features reporter and food columnist contributes regularly to “Eats Beat,” a recurring column that showcases restaurants of all cuisines.

Settembre got her start as a Daily News editorial assistant — a gig she landed after paying her dues as an intern. Back then, the Yorktown Heights, N.Y., native was hopping around the city’s northernmost borough collecting material for the publication’s now annual “Savor the Bronx Restaurant Week.” She also attended an event in Manhattan for the TLC television show, Cake Boss, and trekked down to the Long Island auditions of American Idol, where Simon Cowell and Kelly Rowland were among her first famous interview subjects. Meanwhile, the former communication major was writing for theQuadrangle and balancing her senior year responsibilities at Manhattan.

“When I was interning, I didn’t wait for someone to approach me with work. I would just pitch stories and ideas, and offered to help the writers in any way I could, so they started sending me to cover things,” remembers Settembre, whose favorite career story she’d rather tell than write.

It’s the one of how she got hired.

“My editor called me into her office and said, ‘We have an editorial assistant position open. Here you go,’” Settembre recalls. “I said to myself, ‘this is my first major journalism job at one of the country’s biggest newspapers.’ I was just blown away.”

Given that her day-to-day at the Daily News includes writing articles about entertainment and food in New York City — two things she’s loved writing about since her Quadrangle days — she has a tough time pinpointing favorite aspects of the job, but can’t deny the joy of publishing an article that fuses the two.

One such piece was published on Feb. 19. Entitled, “Saoirse Ronan may be twirling spaghetti all wrong in Brooklyn,” the Daily News web article featured Settembre’s on-camera interviews with Italian restaurateurs in Staten Island and Brooklyn on the most authentic method of twirling pasta. The question of whether to seek the aid of a spoon or rely solely on the fork sparked a “carb controversy” that was inspired by the Oscar-winning film.

“I think the actual favorite part of my job is reporting,” she says, after describing the experience of shooting video for the article. “I love asking questions and just going out and meeting new people. I used to be kind of shy, but this job has really helped to bring me out of my shell.”

As her career in journalism continues to progress, Settembre says on-camera reporting is something she hopes to pursue further, but that writing will always be her first love. Because seeing a piece develop from a middle-of-the-night idea to a feature in a newspaper many New Yorkers read with their Sunday morning coffee evokes a thrill that never wears off.

“I still come home and cut out my stories from the Sunday paper and tweet stories I write for our website,” she admits. “I don’t think I’ll ever stop writing.”

This story originally appeared in the spring 2016 issue of Manhattan Magazine.