Jiddu Tapia ’03 is the CEO of Salka LLC, a renewable energy company that develops, constructs and arranges financing for wind farms and solar power plants. 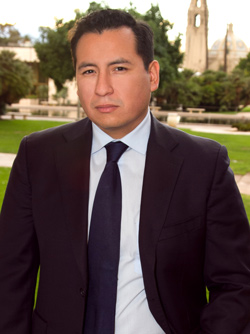 Peruvian-born Jiddu Tapia ’03 never imagined that his career after college would involve improving the environment and decreasing greenhouse gases.

Ten years after graduating from Manhattan College, Tapia is doing just that as the CEO of Salka LLC in San Diego, a renewable energy company that develops, constructs and arranges financing for wind farms and solar power plants. And how exactly does a wind farm reduce greenhouse gases?

By using the power of the wind to turn a generator, the wind’s kinetic energy is converted into electricity. Upon placing multiple wind turbines in the same location, a large amount of electricity is generated; thus, creating renewable energy and offsetting the use of oil, coal and gas.

Engineering the Future of Energy

Throughout his career, he has led teams that have built 11 utility scale renewable energy facilities totaling more than 1,000 megawatts of installed capacity and producing enough electricity to power more than 350,000 homes across the United States and Canada.

In fact, the biggest project his team delivered, at 200 megawatts, was completed in 2012 in Livingston and Woodford Counties, Ill., one of the the largest wind farms built in the U.S.

The project was part of a portfolio of projects that were developed, constructed and financed by Gamesa, and upon completion were sold to Algonquin Power, a Canadian-based utility.

“With his company Salka, it is not enough to build the next run-of-the mill solar or wind project,” says Arturo Henriquez ’02, Tapia’s best friend, fellow electrical engineering classmate, and a system operator at Con Edison. “It is about delivering the next level of innovation and integration in how they get built and utilized on a daily basis.”

I think the things that Manhattan really gave me were all the tools to succeed, and the ability to problem-solve as an engineer.

Shortly after graduating with an electrical engineering degree in 2003 and interning for Con Edison, Tapia received a call from a couple of alumni who had recently created a company called Jasper Energy LLC. Robert Paladino ’72 and Vito Elefante ’72 started the company after working for York Research Corp., a major player in the energy industry in the mid-1980s. Tapia went to work alongside a handful of fellow Jaspers and built his career in renewable energy.

“Jasper Energy was one of the pioneers in the renewable energy sector in the U.S., developing wind farms way before it was very popular,” Tapia explains. “Coming in on the ground floor at a small startup like Jasper Energy is the best way to learn the business. I am very grateful for the opportunity I received.”

After gaining experience in the industry at Jasper Energy, Tapia went on to work for Acciona Energy, which at the time was the world’s largest wind developer. In 2005, he moved to Toronto to serve as director of Canadian Operations.

A few years later, Tapia then moved to San Diego and started a position with Eurus Energy America Corp., as vice president of development for North America.

He points out the Combine Hills II wind farms project as one of the major achievements during his time at Eurus. The 63-megawatt project in Oregon was constructed in 2008 and was financed in the middle of the financial crisis.

The Gift of Education

Looking back on his career, Tapia credits much of his professional success since college to his parents.

“I was born in Peru, so my parents made a tremendous amount of sacrifices to give my brothers and me the opportunities we had,” he adds, noting that both of his brothers, Nityanan Tapia ’06 and Cesar Tapia Jr. ’08 are Manhattan grads with degrees in electrical engineering.

Tapia started college at Marquette University in Milwaukee on a soccer scholarship. Realizing Marquette was not the right fit for him, he moved back home to Mount Vernon, N.Y., and transferred to Manhattan.

“Manhattan College felt more like home, the smaller class sizes and the one-on-one attention from the faculty made the College a place where I was able to take hold of my academics,” Tapia says.

He completed his bachelor’s degree while also playing Division I soccer for the Jaspers.

As Tapia reflects on the past 10 years, he says, “I think the things that Manhattan really gave me were all the tools to succeed, and the ability to problem-solve as an engineer.”