With an unexpected pandemic transitioning Manhattan’s classes to online learning mid-semester, many campus gatherings were cancelled or postponed. While some events are easy to pull off in an online format, others are a bit trickier. Performing Arts director Andy Bauer was committed to bringing the joy of the arts to every Manhattan College community member’s home.

Bauer produced a series of videos featuring the Manhattan College Singers, Players and Jazz Band throughout the past few weeks in order to replace their on-campus end-of-semester performances. The videos were recorded in the performers’ homes from across the U.S.

“The intention of these videos is twofold,” he notes. “First, we, as performers, must continue somehow to forge ahead despite the dilemma of not being able to directly interact. The videos became our performance venue.”

“Secondly”, Bauer continues, “we, as artists, have a unique opportunity and a responsibility to touch others in a deeply powerful and emotional way. We can give people hope, along with a temporary respite to their fears, anxiety and loneliness. My greatest hope is that the experience of adversity and struggle can spawn a reflection of true beauty and inspiration.”

These videos were conceived as virtual performances and, in the case of the Singers, to replace their annual spring concert. The Manhattan College Singers are a group of 65+ undergraduate students who have embarked on several domestic and international tours including Montreal and Quebec City in the spring of 2019. They also performed for the annual Radio City Music Hall Christmas Spectacular in November 2018 and usually hold several concerts on campus, including the annual Festival of Lessons and Carols each December. The Singers were scheduled for a concert tour of California this year.

“We know when we assigned this project, it might be difficult for some people—trying to get away from loud rooms at home, filming themselves on camera or practicing their abilities outside of rehearsals,” says Jenn Bueti ’21, president of the Singers. “We appreciate all the work people put into this club and we believed asking people to be a part of this video would recognize that. Essentially, we wouldn’t be a group without our members, so I believe this video was meant to be the performance we never got to have.”

The Singers found it especially important to organize this project while at home, in order to commemorate their graduating seniors and keep the community connected. “We are so proud of how this project turned out, and I love that I have this memory from my last semester,” says Aubrey Sabatino ’20, vice president of the Singers. “I've been able to share this video with friends and family who normally wouldn't get to see MC Singers in concert. This project helped me feel connected to MC and to Performing Arts from home.”

The Manhattan College Players is a student-run theatrical organization originally established in the 1980s. The Players organize various productions throughout the school year, however, they most notably perform a play in the fall semester and a musical in the spring semester, directed by James Ryan Caldwell, adjunct instructor of theatre. The Players were in the process of rehearsing for their production of The Addams Family when students were sent home.

In addition to their on-campus productions, the Players also attend off-campus events and conventions, including the Region 1 Kennedy Center American College Theatre Festival this past January, where multiple students were recognized for their talent. “The dedication and passion in this group is admirable,” Caldwell mentions.

The Manhattan College Jazz Band was formed in 1986 and currently serves as an instrumental group for various on-campus events. Directed by Geoff Mattoon, the Jazz Band is composed of Performing Arts Scholarship students and delivers a challenging repertoire of jazz music for the community to enjoy. The Jazz Band also features combo offshoots of more advanced players, which play in professional settings both on and off campus, including the DFI Educational Trust Gala.

Despite the quarantine, the combos have continued to flourish, producing inspiring virtual performances that have uplifted the community. The Stay at Home Shuffle, written by Mattoon during quarantine, was created for the Jazz Band to make fun, energetic and challenging music together despite their physical distance apart.

You can watch the videos below and subscribe to our YouTube channel to see even more virtual events from the Manhattan College community.

Creating these videos started immediately after the quarantine began, when Bauer recorded a piano click track consisting of a piano and metronome in Thomas Hall, Room 517. Bauer explains his inspiration and how it evolved into the videos created at Manhattan: “A virtual choir was put together by the renowned choral composer Eric Whitacre. His virtual choir is different because they actually are able to perform live through an extremely fast internet connection and other advanced technology. Ours was more like a multitrack studio recording except that all the performers were in their houses (a couple of them used their cars!)”

Mattoon similarly recorded a click track from home that was shared with the Jazz Band to perform virtually.

In the case of the Singers, once each individual performer had their click track, they would monitor it in their headphones while recording themselves using their phone or computer. Those recorded videos were sent back to Bauer, who enhanced and equalized the audio, then mixed the tracks using Logic X - Pro recording software.

Drums, bass and saxophone were added, and the tracks were compiled into a 2-track master. The videos were added and synced in a gallery view by a professional video editor.

In addition to the Singers, Players and Jazz Band performances, another annual performance that was delivered digitally is this year’s album class, with Bauer acting as faculty and arranger. A medley of songs from “Tapestry” by Carole King concludes this semester’s modified course curriculum. 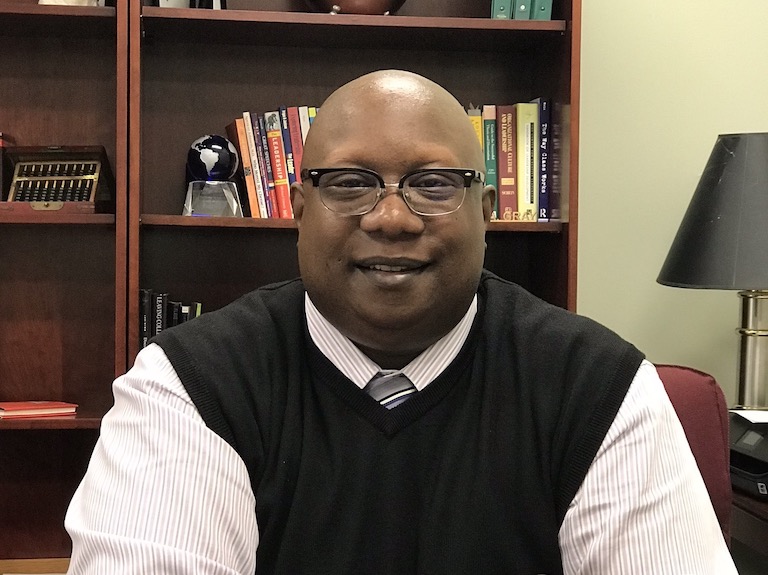