It often has been said that Manhattan is the college that built New York City.

With all the alumni engineers working in every facet of the industry, represented in so many companies within the metropolitan area, and involved in seemingly every major project in the five boroughs and beyond, there’s a definite truth to the statement.

Now, Manhattan engineers have yet a new major project, a new milestone to add to their sky-scraping list of accomplishments. With more than 50 alumni working in almost every capacity, it can practically be said that Manhattan is the college that built the new Governor Mario M. Cuomo Bridge, or at least has a sizable stake in it.

This new bridge, which will fully open to traffic in 2018, replaces the existing Tappan Zee Bridge with a 3.1-mile state-of-the-art, twin-span bridge across the Hudson River between Westchester and Rockland counties.

To say that the project has been newsworthy or highly anticipated for those living in the area, would be an understatement. The $3.98 billion Governor Mario M. Cuomo Bridge is one of the largest single design-build contracts for a transportation project in the United States. Located fewer than 20 miles north of New York City, the cable-stayed span crosses one of the widest parts of the river and will be the largest bridge in New York State history.

While those involved in the bridge were undoubtedly excited to be part of such an impressive project, many will say that working with fellow alumni made it all the more special, and made them prouder to be a Jasper. Here are just a few of their stories.

While some of these alumni started working on the new Governor Mario M. Cuomo Bridge knowing a fellow alumnus or two, most of them didn’t realize the sizable number of Jaspers involved until they got into the field and began meeting the various engineers.

For instance, McGuinness and Canale, who are just a few years apart, met each other while working on this project. They began talking about other alumni whom they had met or heard about, and quickly realized, as they started to count them, that there were quite a few Jaspers involved with the bridge. And, of course, once they started to pay attention, that number just seemed to grow.

“As we worked, and we got in the field, it’s ‘I went to Manhattan College’ or something like that, and that’s when we started adding it up,” Canale says.

Martello remembers that when he joined the project, there were 12 alumni involved, but the more he would talk to people and the more he met people in the field, that list of Manhattan engineers just continued to increase in length.

There are Jaspers spanning from the mid-70s to new graduates and interns, and they are involved in every aspect of the new Governor Mario M. Cuomo Bridge, which Canale attributes to Manhattan’s exceptional education in engineering and its ability to produce great engineers.

“It just speaks to the College that the engineering school, which has been around now for 125 years, has 50 alumni of various ages involved in the planning, design, highway, foundations — cutting through all disciplines — working on the bridge,” Canale notes.

LaMagna had four or five friends also working on the bridge, but he met many of the other alumni engineers for the first time. It didn’t surprise him to learn of all the fellow Jaspers involved.

“It’s a local school, and it’s got a great reputation,” he says. “It gave us all a good education in the engineering basics and in advanced technologies. So, it doesn’t surprise me at all.”

Brown had heard about all of the Jaspers on the job, but it didn’t really become apparent until she started meeting them.

“I initially heard about other alumni, but it didn’t click until I met them,” she says. “It was a series of warm and fuzzies with each Jasper I met. When you get to the real world and see other competent people that graduated from the same institution, you realize that the engineering departments have done something right.”

There aren’t any other schools that could compare to Manhattan College in terms of graduates associated with the project. While the Thruway Authority is based upstate, and tends to have a lot of University at Buffalo (UB) alumni among its ranks, even UB, with its eight or nine alumni, couldn’t compete with the large number of Manhattan representatives.

It did lead to a little bit of competition, however, and there was a mention of UB wanting to challenge Manhattan College to a softball game. But as McGuinness jokingly points out, they couldn’t field a team.

In all seriousness, McGuinness notes that this Manhattan connection has existed throughout his years in the industry.

“As soon as I graduated, I realized every project that I’ve been involved with, it seemed like every office I walked into, there was somebody that identified as an alumnus, so I had that link to somebody in every project,” he says. “As diverse as this project is, Manhattan College seems to have involvement in every corner.”

Canale adds that if someone had told him, when he was a senior in college, that one day he’d be working on a project like this, he would have laughed it off as being crazy — he couldn’t even process how to get to that point. Looking back now, he credits the College for helping him get to that point — to be a part of such an exciting and historic project. And that association isn’t lost on him.

“I was sitting here at the opening ceremony, and I texted Dr. Moujalli Hourani [associate professor of civil and environmental engineering],” he recalls. “I just said, ‘I want to thank you for everything you’ve done for me.’ These professors care so much about us, and really helped us along. I think if you talk to any one of these alumni, they would say that, too. You just don’t ever feel too far from Manhattan College.” 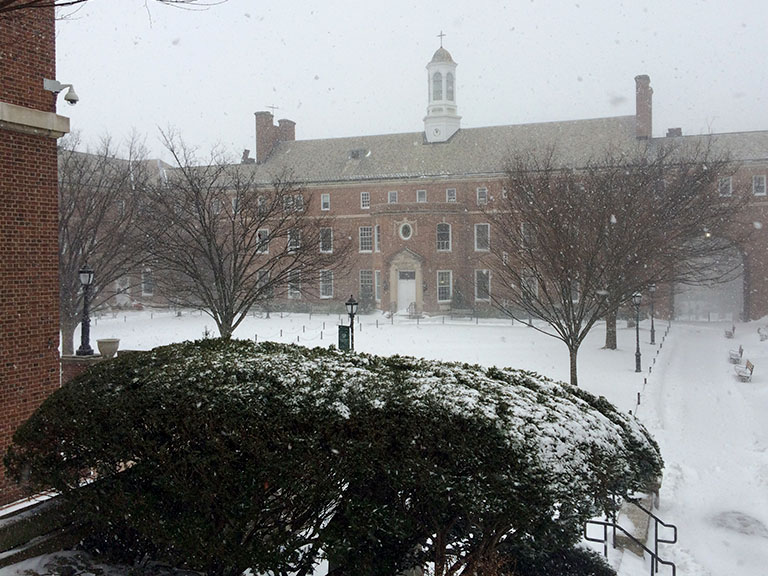