A leading expert on baseball history, Tim Reid ’77 was a primary researcher and adviser on The First Boys of Spring, an award-winning documentary narrated by famed actor Billy Bob Thornton. 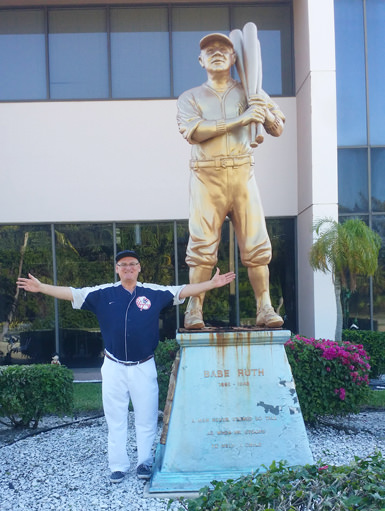 “Did you know that one of the most notable teams in Hot Springs baseball history had a pitcher, George Chalmers, who played for Manhattan College?” asks Tim Reid ’77, excitedly filing through his mental database of baseball trivia.

A leading expert on the classic American pastime, Reid is full of fun facts about baseball’s early days and bygone stars.

Many of these tidbits are now memorialized in The First Boys of Spring, an acclaimed documentary on the origins of Major League Baseball spring training in Hot Springs, Ark., for which Reid served as a historical researcher and adviser.

The documentary, directed by the University of Arkansas’ Larry Foley and narrated by Billy Bob Thornton, has garnered the attention of the National Baseball Hall of Fame in Cooperstown, N.Y., and has won numerous awards, including two 2016 mid-America Emmys for Best Cultural Film and Best Writing.

“This history was lost, but we’re helping to dig it out,” Reid says. “Most people think Major League Baseball started around the time of Babe Ruth — maybe 10 years earlier with Ty Cobb. In reality, it was played from just after the Civil War onward. It’s a fascinating piece of Americana.”

Reid was born in Brooklyn but moved to Florida as a 9-year-old when his father took a job as an engineer for the space program. His father had planned on attending Manhattan College before World War II but never had the opportunity to — so Tim did, instead.

“It was wonderful for me,” he remembers, returning to the city following high school. “It was like a door to the world because New York was there. You jumped on the train, and you were in Manhattan.”

A multi-sport athlete in high school, Reid joined the Jaspers track and field team and enrolled in engineering classes. Settling into his new home borough, he became an avid Yankees fan, often jogging by the Riverdale home where Lou Gehrig lived his final years.

During summers home in Florida, Reid and his cousin, Bob Ward, worked as engineering aides for the City of St. Petersburg, a historical spring training hub for the Yankees and the Cardinals. It was there in St. Pete that Reid says they first became baseball historians, exploring the city’s past and hearing stories about the game’s greats, most notably, Babe Ruth. One story, in particular, stood out — Ruth’s 1934, 611-foot homer — the longest home run in any Major League game ever.

Together, Reid and Ward became experts on this piece of history, co-founding the Committee to Commemorate Babe Ruth. They were contacted by baseball historians around the country, as well as members of Ruth’s family, and have run many charity events on their behalf over the last decade. This notoriety would eventually lead them to Hot Springs, Ark. — the birthplace of spring training.

An iconic resort town in the mid-1800s, Hot Springs represented both the wonderful and the wild of that era — lush mountain trails and natural springs boasting health benefits, mixed with gambling and drinking. Baseball’s burgeoning teams arrived for spring training starting in 1886, and more than 100 hall-of-famers trained in town throughout the next 40 or so years.

Passionate about sharing these stories with the public, Reid, along with his friend and noted baseball historian Bill Jenkinson, helped create the Hot Springs Baseball Trail, a self-guided tour of the area and its history.

Foley saw storytelling potential in the Hot Springs Trail, and developed The First Boys of Spring project; asking Reid and Jenkinson to help head the research.

The year-and-a-half project included daily advising by phone, as well as trips to Cooperstown, local universities, the Library of Congress, and of course, Hot Springs. For Reid, who continues to work as an electronics engineer for the government, the project was daunting — but it was also a dream come true for the baseball buff.

“I always try to use my energy and abilities to save history,” Reid says. “Manhattan College really taught me that there’s a way to do what you want in a successful way. And you knew that because you saw so many go before you who did it, too.”