Jasper alumni Steve Smith ’89 and Stephanie (George) Minister ’91 serve on the Board of Directors of the United States Foundation for the Children of Haiti. 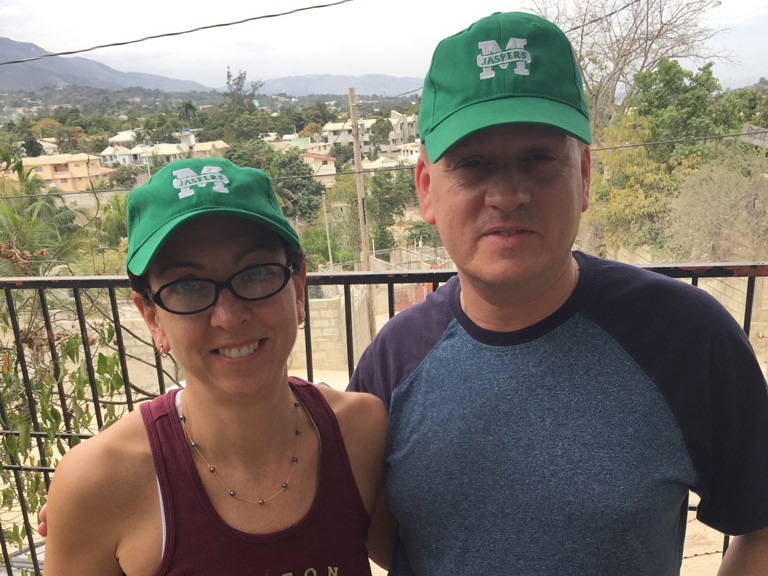 Reunited approximately 1,500 miles away from their alma mater in Port-au-Prince, Haiti, Steve Smith ’89 and Stephanie (George) Minister ’91 have been serving on the Board of Directors of the United States Foundation for the Children of Haiti (USFCH) since 2013. The organization works to improve the lives of underprivileged and disabled children in Haiti by providing medical care, housing, and education.

The two Jaspers reconnected through Facebook when Smith’s wife, Katharine (Capshaw) Smith ’90, saw that Minister had shared a post regarding her first trip to Haiti in 2013. “This was a really wild coincidence,” Smith says, as it had been years since his wife and Minister had lived in the same dorm at Manhattan.

Smith manages grant applications, and Minister supports USFCH’s social media outlets. The board meets in Haiti once a year to discuss business, visit the hospital and children’s village, and check on the organization’s newest project: the Christian Institute for Technical Training (C-Tech). C-Tech will offer programs in trades where there is a need for the technical skills in order to help graduates find employment when they complete their schooling.

“In the beginning, USFCH was a single orphanage. Today, USFCH has more than 500 children attending our schools, and we employ over 150 Haitian citizens,” Smith says of the organization’s growth. “I do my small part to learn and help and hopefully make some children’s lives a little better.”

Actively involved in their church communities, both Smith and Minister are grateful for their Catholic background and the opportunities the College has afforded them to give back to the community.

“We are all God’s children, and we do what we can to help our neighbors,” Minister says. “I’ve held fundraisers, I’ve spoken at churches, I’ve run a marathon to raise money — any small, little effort I can think to do.”

Smith earned a B.S. in electrical engineering, and resides in Vernon, Conn., with his wife and four children, two of which have been adopted from USFCH. Minister received a B.S. in computer information systems in finance, and lives in Hingham, M.A., with her husband and daughter.

Both Smith and Minister see their work in Haiti as an extension of their Lasallian education and experiences at Manhattan, and they encourage others to make any effort they can to help those in need.