The newest class of Jasper greats will be inducted on Saturday, Nov. 11. 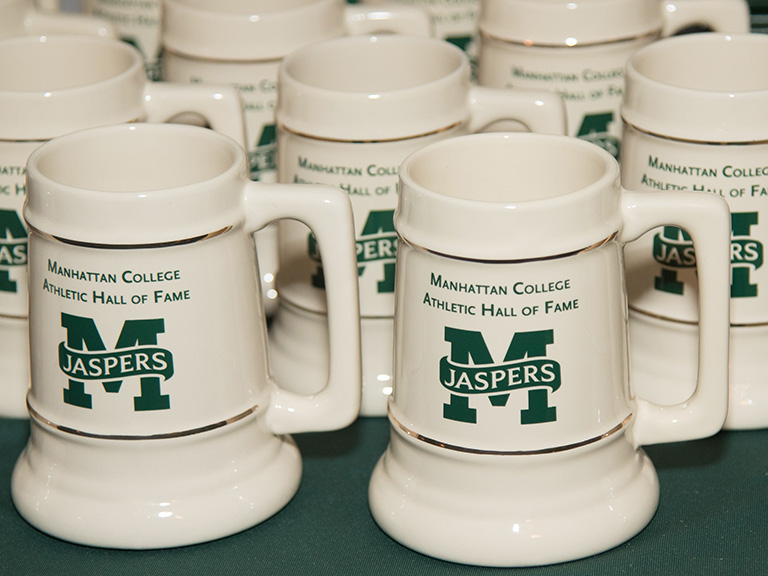 Eight individuals and two teams have been elected to the Manhattan College Athletic Hall of Fame as members of the Class of 2017. The 39th annual induction ceremony and dinner will take place on Saturday, Nov. 11.

In addition, the 1992 men's track and field and 1992-93 men's basketball teams will be honored. The 1992 men's track and field squad won the IC4A Indoor Championship, while the 1992-93 men's basketball team won both the Metro Atlantic Athletic Conference (MAAC) regular season and tournament titles, and made Manhattan's first NCAA Tournament appearance in 35 years.

Chris Cody was the MAAC Pitcher of the Year in 2006, when he went 12-2 with a 1.42 earned run average and 105 strikeouts, as Manhattan won the first MAAC championship in program history. He earned the win in the Jaspers' upset victory over sixth-ranked Nebraska in the opening game of the 2006 NCAA Tournament and was selected to the NCAA Lincoln Regional All-Tournament team. Cody, who was named to the MAAC's 35th Anniversary All-Time team, still holds program career records for wins (29), complete games (19) and strikeouts (295).

James “Airy” Donahue carved a legacy as a leader across multiple sports. He served as a captain on both the basketball and baseball teams and later signed with the Boston Red Sox to play pro baseball. During his collegiate career, he batted .450 during his four years and also led the way on the hardwood. A two-time captain, Donahue captained the 1910-11 team that won 13 games, a program record at the time.

Frank Gagliano served as an assistant coach under fellow Hall of Famer Fred Dwyer from 1969-74. During that time, Manhattan won IC4A titles in both cross country and indoor track and field, as well as the 1973 NCAA Indoor National Championship. Gagliano coached the Jaspers to a world record in the distance medley relay and an American record in the 4x mile relay. He has coached a total of 27 Olympians during his career.

Joseph Gallagher has been a long-time supporter of Manhattan athletics and helped spearhead the creation of the Athletic Hall of Fame. The sports editor and later editor-in-chief of the Manhattan College student newspaper as an undergraduate, Gallagher had a long, distinguished career in the sports television business.

Ed Lawson is the Jaspers' all-time leader in assists (447). He also ranks second all-time in steals (201), and is 31st on Manhattan's career scoring list with 1,049 points. Lawson is the only player in program history with 1,000 points, 400 assists and 200 steals. In addition, he founded and serves on the board of Fathers Incorporated, a nonprofit organization that promotes responsible fatherhood.

Tiina Magi holds school records in the triple jump (indoors and outdoors) and high jump (outdoors). She was Manhattan's first-ever NCAA Championships qualifier in the triple jump, and she also won an ECAC title in the event. Magi regularly contributed points in all four jumping events, as well as the javelin, at the MAAC Championships.

Jeff Rowett earned MAAC South Rookie of the Year honors after hitting .308 as a freshman in 1995. He would go on to become the first player in program history to achieve First Team All-MAAC status all four years. Rowett was a two-time team captain, and his 142 career hits ranked second on Manhattan's all-time list at the time of his graduation.

Robert Schimpf scored 41 career goals, including 16 in the 1970 season, both of which are still school records. He had a four-goal outing against Marist on Oct. 26, 1970 and averaged nearly a goal per game during his career.

Tom Welling ran both cross country and track for the Jaspers. He was consistently Manhattan's top performer in cross country, and he broke the Van Cortlandt Park five-mile course record in 1964. Welling also set the school record in the mile with a time (4:06.9) that still ranks among the best in program history. He qualified for the 1965 NCAA Outdoor Championships in the mile.

The 39th Manhattan College Athletic Hall of Fame induction ceremony on Saturday, Nov. 11, will begin with a Mass in the Chapel of De La Salle and His Brothers at 4 p.m. The induction ceremony and dinner will follow at 5 p.m. in the Great Room of the Raymond W. Kelly '63 Student Commons. Registration information will be available in the fall.