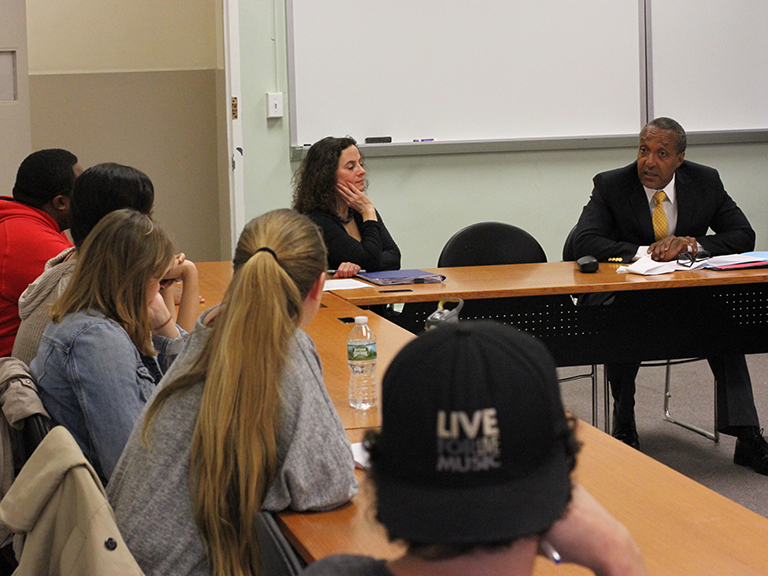 Kamau, who serves as the country’s permanent representative to the U.N., visited the College that day to meet upperclassmen enrolled in GOVT 420: Conflict Resolution, a senior seminar course that analyzes sources of conflict and explores ways of finding resolutions at the interpersonal, neighborhood, national and international levels.

The personal and professional insight the world leader offered during the 50-minute class period, which included a speaking portion and Q&A segment facilitated by government professor Pam Chasek, Ph.D., was equally as relatable to the principles students are learning in her classroom as it was informative on today’s most important world issues. It also lent insight into the ways that we as a College should be considering them.

In Kamau’s address to students, he described the U.N.’s role in various peace-keeping and building initiatives that take effect across the globe.  To that end, he described the roles of the U.N. general assembly, Security Council, and Peacebuilding Commission.

Together, these three groups embody the organization’s peacebuilding architecture, and, in conjunction with that, gather after major acts of violence, like the Syrian chemical attack that occurred on Apr. 4, two days before Kamau’s visit to Riverdale. Together and separately, various U.N. diplomats discussed this tragic event, and began to strategize ways that relations can be improved in that part of the world, the Ambassador said.

During the Q&A portion of the lecture, a student asked Kamau, who is the Vice Chair of the Peacebuilding Commission, to expand on his opinion of the Syrian crisis, and elaborate on how international meetings can begin to reach a solution that helps save lives in the Western Asia warzone. To respond, he noted the key problem in this conflict, which is that a deadlock currently exists between the superpowers that are aiding its protagonists.

“The primacy of politics is so important because it gets people at the negotiation table,” Kamau said. “And you say to people, no, don’t resort to war. Stay at the table. Just keep talking to each other. There has to be a way to solve this.”

In addition to his role in the U.N.’s various peace-related efforts, Kamau is also playing a key role in the United Nations’ 2030 Sustainable Development Agenda. As Special Envoy of the President of the General Assembly on the 17 Sustainable Development Goals (SDGs), he is directly involved with its various missions to improve economic and social development, and protect the environment.

Peace for the Future

A key focus of Kamau’s talk to students in Manhattan’s Government department, many of whom will likely end up working in top political organizations and agencies in New York City and beyond, was to impress upon them the importance of maintaining a positive outlook. Regardless of the violence that may exist in the world, and the tragic events that populate media headlines, there is always an opportunity to believe that peace can exist, and that the possibility of creating a more unified world is worth striving for.

Ambassador Kamau’s visit to campus is the most recent development in a longstanding relationship between the U.N. and Manhattan College. On Apr. 13, Chasek will accompany participants of the Model UN program to the National Model United Nations (NMUN) Conference in New York City, where they will compete against other institutions in their knowledge of peacekeeping, regional conflict, economic and social development and the environment — the same global issues Kamau offered perspective on during his on-campus talk.