Matthew Bennett ’15 departed New York City for the North Pole after being stationed at Eielson Air Force base following graduation from the AFROTC program. 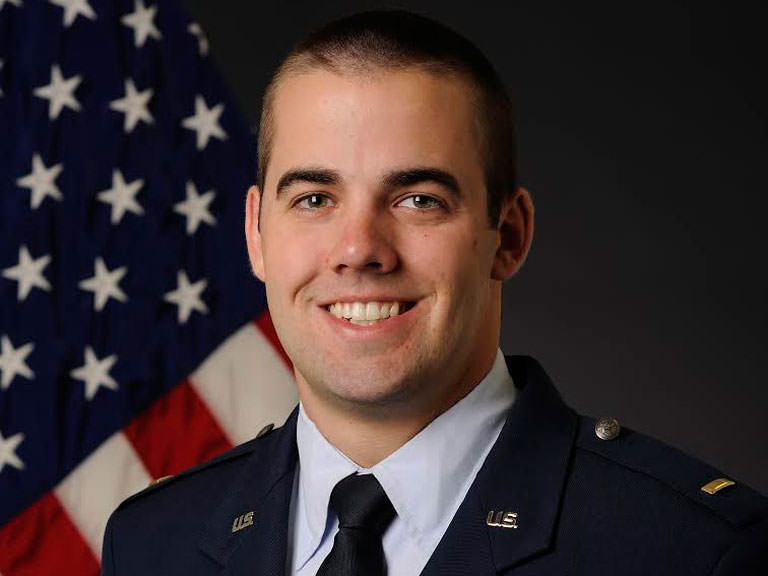 A year after graduating from Manhattan College and leaving New York City, life and daily scenery has changed immensely for Matthew Bennett ’15. For one, his whole concept of night and day has changed — he now experiences 24 hours a day of darkness in the winter, and all-day light in the summer. That’s because Second Lieutenant Bennett is now in the U.S. Air Force and resides in North Pole, Alaska.

Since the fall of 2015, Bennett has served as a civil engineering project programmer for Eielson Air Force Base in Alaska.

“Getting to wear the uniform in the world’s greatest Air Force is enough to get me excited to go to work every day,” Bennett says. “I had great mentors growing up, and I feel like they really helped shape who I am now, so I try to be that positive mentor for others.”

In his role, Bennett is helping to coordinate planning for the newest fighter jets F-35s, set to arrive in 2020 with significant expansions to the base. The base will double in size and will need new buildings, offices and hangers to store the fighter jets. He is also inspecting the base to make sure it has the proper utilities to handle the upgrades and requesting funding from the government for the entire project.

“Matthew is a young man who has the potential to be a leader in the engineering industry and in public life,” says Moujalli Hourani, Ph.D., associate professor of civil and environmental engineering.

Bennett entered Manhattan College as a freshman in the fall of 2011 eager to explore New York City, major in civil engineering, and join the College’s detachment of the Air Force Reserve Officer Training Corps (AFROTC), which the College has hosted for more than 60 years — the only one of its kind in New York City.

“Matt embodied the Air Force core values — integrity, excellence and service during his time at Detachment 560,” says Captain Kevin Limani, assistant professor of aerospace studies with Air Force ROTC Detachment 560. “The one trait of Matt that left a lasting impression on me was his desire to mentor the younger cadets in the program.”

When Bennett started the college search in high school, he visited Manhattan and New York City for the first time. He grew up in Huntingdon, Pa., a rural town close to Penn State University, and was eager to attend a college with an established civil engineering program and AFROTC.

“Being around the city helped me grow,” Bennett explains. “That helped me to learn to adapt and learn to be diverse and see what other people’s opinions were.”

During his time at Manhattan, Bennett not only participated in AFROTC but also several other activities. He was a resident assistant, a member of the student chapter of the American Society of Civil Engineers and Chi Epsilon (the civil engineering honor society), and worked for the campus events office. As a sophomore, he also took part in a Lasallian Outreach Volunteer Experience (L.O.V.E.) trip to Montana, as well as played several intramural sports.

“Dr. Hourani was always really tough on me and my classmates. He was tough on us because he knew we were capable of doing what he was asking of us,” Bennett says. “He would push us to no end because he really cared about us. From my senior year to present time, Dr. Hourani has been there for me.”

Fast-forward to summer of 2015, and Bennett officially graduated from Manhattan and became a part of the Air Force at the commissioning ceremony. Since he planned to have a gap year before reporting to duty at Eielson Air Force Base, Bennett began a civil engineering position at STV Group, Inc., thanks in large part to Milo Riverso ’81, Ph.D., P.E., president and chief executive officer of the company, with whom he was introduced to by Hourani.

At the end of the summer, Bennett was notified that the Air Force was calling him to duty sooner than expected, so he left STV and prepared to move to Alaska. Because he needed to transport all of his belongings to Alaska, Bennett planned to drive from his hometown in Pennsylvania and visit several attractions along the way. He was able to see national parks, such as the Badlands in South Dakota and Yellowstone in Wyoming, and in Canada, he explored sites such as Calgary, Banff National Park, Lake Louise and Jasper National Park.

Almost one year later, Bennett is immersed in Alaska and enjoying the outdoors on his days off — playing hockey and ice fishing in the winter, and catching salmon and camping in the summer. One of the coolest job perks is having the Northern Lights as a backdrop. He will be stationed in Alaska for two more years until his next adventure.

“Not too many people can say they grew up in a small town, spent four years living in the big city, and then moved to the North Pole,” Bennett says. “I have a very unique opportunity right now to learn and grow as an individual and civil engineer. I get to do things people only ever dream about doing.”