Tom Grech ’93 serves as executive director of the Queens Chamber of Commerce working to strengthen businesses in the different communities of Queens. 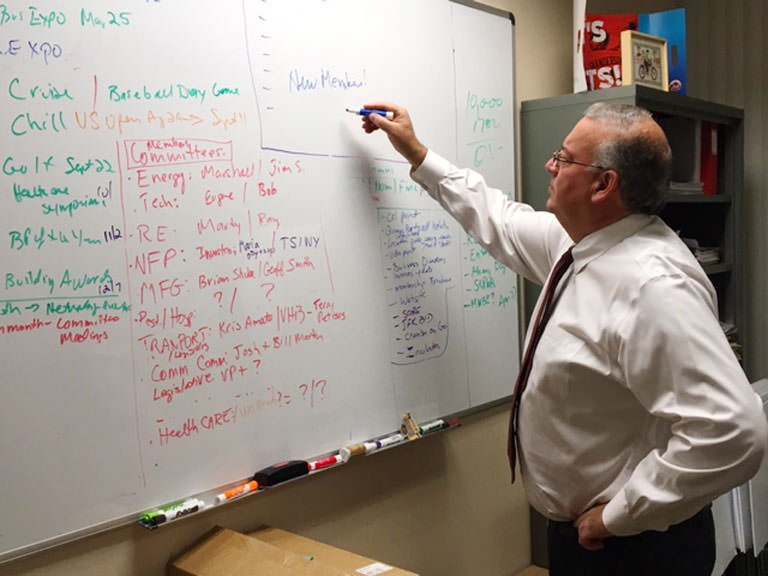 Queens. It’s home to your butcher, your baker, and your candlestick maker, and they all need to stay in business for the borough to thrive. Tom Grech ’93 (MBA), who serves as executive director of the Queens Chamber of Commerce, riffs on the popular nursery rhyme to connote the area’s storied past and the importance of preserving it.

To do this, he advocates for local proprietors large and small, as well as the borough’s seven colleges, including York College in Jamaica, where Grech is a member of its foundation’s board of trustees. His job is to connect the chamber’s total number of members, which now includes more than a thousand, and who are divided into several categories, including: advertising and media, arts, culture and entertainment, home and garden, health care, business and professional services, among others.

“Sure, we have the New York Mets and Con Edison, but we never want to ignore the mom and pop businesses — the bodegas, the falafel stands, and our smaller restaurants,” Grech says.

Since he began as director in June 2015, the Astoria native has grown the total number of chamber members by 30 percent. They reside in all of the borough’s largest populated neighborhoods, which he’s able to reference on a map of zip codes in the organization’s Jackson Heights headquarters.

“We’re all in this together,” Grech says of the borough-wide professional sphere. “It’s incumbent on me to strengthen businesses in the different communities of Queens.”

To show the borough’s wide geographical range, he and the chamber distribute This is Queensborough, a monthly journal that updates residents on health care, technology and commercial happenings from College Point to Far Rockaway, and from Ridgewood to Bayside.

But that doesn’t mean Queens is its own city — though if it were, it would be the fourth largest in the U.S., behind Los Angeles and Chicago. Comprised of nearly 130 nationalities, the borough is a melting pot, as well as a vital part of the larger New York City community, which the College alumnus has been an active member of throughout his adult life.

While working toward a master’s degree in international business from Manhattan, Grech trekked up to the Bronx during the week and on Saturdays. There, he studied with Joseph Bonnice, Ph.D., a longtime marketing and management professor with whom he kept in touch long after graduation. At the beginning of the semester, they discovered a commonality — both of their families emigrated to the U.S. from Malta, a little-known island in the Mediterranean Sea.

During the time he was in Bonnice’s class, Grech traveled often to Chile, Mexico and other countries in South America, opening offices there for the international printer, RR Donnelley & Sons Company.

He’d come back after each trip to report to his classmates on the different places he’d visited and what he had learned. For Grech, drives to Riverdale at that time were accompanied by Spanish languagelearning cassette tapes, which he used to prepare for each trip. When Bonnice passed away in 2003, 10 years after Grech graduated with his MBA, he received a letter from Bonnice’s wife, Gloria, who told him of the impact he had on her husband’s teaching career.

“You’re a composite of the places you’ve been and the people you’ve met,” says Grech, whose connection to the College doesn’t end there. In 2009, he represented the University of Scranton, his undergraduate alma mater, at the presidential inauguration of Brennan O’Donnell.

During the next four years, the prediction is that the Queens Chamber of Commerce will continue to grow and its members will continue to prosper. When Grech began as director, he vowed to double its membership by the year 2020. Moreover, his long-term goal is to solidify the borough’s place in New York City and the country.

To highlight this point, Grech repeats a tagline he uses often.

“Queens used to be the borough you traveled through, now it’s the one you travel to,” he says. “It’s a destination.”