Lizette Richardson ’84 is the first female to serve as the superintendent of Lake Mead National Recreation Area, a 1.5 million-acre area that spans Nevada and Arizona. 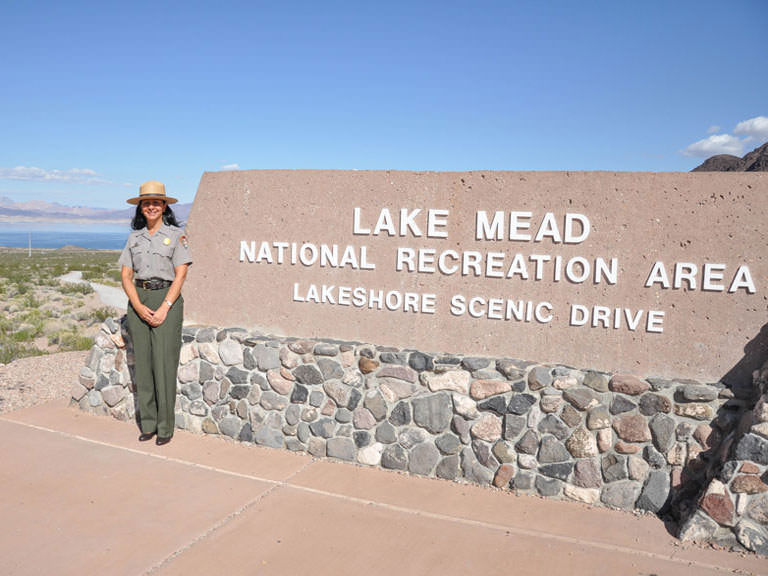 On August 25, 2016, the United States celebrated an important milestone in its history — the National Park Service turned 100 years old. The centennial commemoration kicked off the second century of stewardship of America’s national parks and engaging communities through recreation, conservation and historic preservation programs. At the helm of this stewardship, and for one of the largest and most visited places in the National Park System, is a Jasper, Lizette Richardson ’84.

Richardson is the superintendent of Lake Mead National Recreation Area, a role she began last October, where she is responsible for overall park operations, including law enforcement, facility maintenance, concession, natural and cultural resources, and all administrative functions. Her job is actually more in line with a mayor of a big city, when considering the scope of her territory — comparable to the state of Delaware.

The park also has substantial natural and cultural resources, and includes nine designated wilderness areas, making it America’s most diverse national recreation area. Given the size and diversity of the area, there’s always something new going on at the park each day.

“I could be dealing with our national and regional personnel on service-wide policy issues, providing input on a major capital improvement, dealing with a law enforcement incident, preparing budget requests, meeting with local partners on volunteer and youth programs, or responding to media inquiries,” Richardson says.

And there are definitely challenges. Having previously worked at Lake Mead as its chief of maintenance and engineering for eight and a half years, she was familiar with the challenges of running one of America’s largest national park units.

“One of our biggest challenges right now is the 16-year drought that has led to lowering water levels in Lake Mead,” Richardson notes.

“Another challenge is our aging infrastructure. Lake Mead is a big park, which translates to big needs.”

But her goals remain the same: to focus on people, programs and partnerships.

“Our park vision is to inspire and challenge everyone to find their connection to Lake Mead National Recreation Area and enjoy the adventure,” she says.

Richardson especially enjoys working with youth in the community, building relationships with the park’s partners, and working with such a dedicated team. She’s also proud of the park’s contribution to the local economy.

But one of her favorite aspects of her job is encouraging young women who are interested in math and science to pursue their dreams. As the first female superintendent of Lake Mead — an accomplishment of which she is quite proud — this one hits close to home.

“One of my passions is mentoring women to take future leadership roles in the agency as the National Park Service prepares for its next century,” she says.

Prior to becoming superintendent, Richardson was responsible for developing policy, and implementation of planning, design and construction for all National Park Service major capital improvement programs. One of her key accomplishments was developing policy to address the impacts of natural hazards and climate change on facilities across the entire National Park Service.

Before coming to the National Park Service, she was a project manager with the U.S. Army Corps of Engineers and the U.S. Air Force, managing large multimillion dollar projects.

Born in Manhattan, Richardson grew up in the Bronx, near Van Cortlandt Park. The first in her family to graduate from college, she chose Manhattan because of its well-known reputation in engineering and for its proximity to home. She graduated from the College in 1984 with a degree in civil engineering, and is a registered professional engineer in Nevada. Her younger brother, Antonio Sukla ’89, followed in her engineering footsteps.

“Pursuing a degree in civil engineering allowed me to have an impact on all aspects of private or public infrastructure projects that improve the quality of life for the public,” she says.

And having an impact on the Park Service is inevitable for this pioneering alumna, as she stewards Lake Mead into its next century.