When Drew Kelleher applied for the position of men’s lacrosse head coach at Manhattan College in the summer of 2015, he did so because he felt it was the right time and right place for him to pursue his dream.

When the Manhattan College job opened up, Kelleher had a different insight than other applicants might have had. His grandfather Daniel ’33, played basketball for the Jaspers for three years, and his parents Jeanne ’78 and Dan ’77 are also alumni, having met in Overlook Manor, when Dan was Jeanne’s resident assistant. The family would often travel to the Bronx for basketball games and even made the 17-hour drive to Memphis, Tenn. in 1995 to watch the Jaspers knock off fourth-seeded Oklahoma in the first round of the NCAA Tournament.

“I know what Manhattan College means to my family, and what opportunities there are here in New York after our students graduate,” said Kelleher. “I know what a hidden gem this place is and what it can be in the lacrosse world.”

Kelleher grew up in the middle of a lacrosse hotbed in Delmar, N.Y., located in New York’s Capital District. He began playing lacrosse in the third grade and was also an avid ice hockey player. After graduating from Bethlehem High School, he earned a scholarship to play lacrosse at the University of Vermont. The team’s leading scorer as a senior, Kelleher was a New England Intercollegiate Lacrosse Association Scholar-Athlete, graduating with his bachelor’s degree in education.

Kelleher started his career an assistant coach at Hamilton College, then spent a year at Siena before joining the coaching staff at Boston University, which launched their program in 2013, Kelleher’s first year at the school. As the offensive coordinator and recruiting coordinator, he quickly helped guide Boston University to a top 20 national ranking in the highly competitive Patriot League.

Making Strides on the Field and Beyond

After winning the 2002 MAAC championship, the Jaspers were a contender for the MAAC title and an NCAA Tournament bid for most of the previous decade. While their fortunes changed at the beginning of this decade, the 2016 squad increased its win total in Kelleher’s first year on the sidelines, punctuating its season with a late-season, one-goal victory over Marist, the previous year’s MAAC champions. 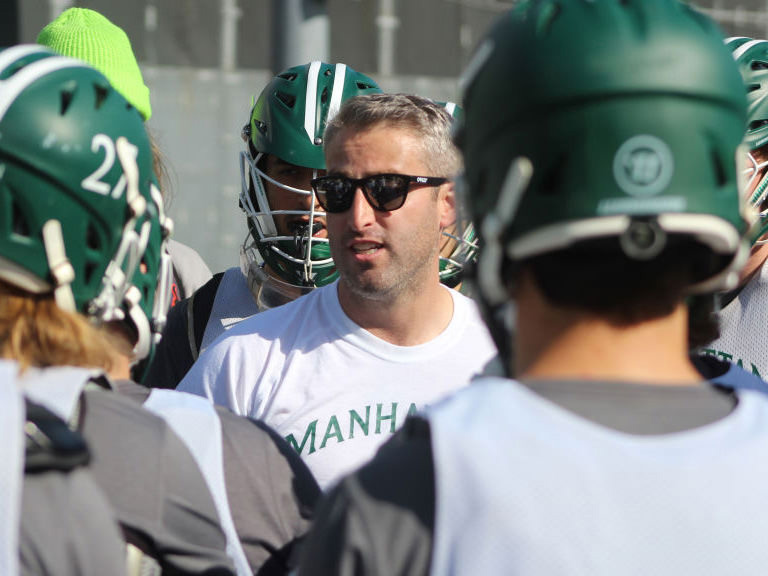 “[Kelleher] really challenged us at the start of last year,” said Alex Gitlitz ’16, who started all 15 games last season and earned the senior class medal of excellence in the School of Engineering last May. “He kept pushing our senior class to make the program better and be leaders for our team. It meant a lot to play for someone who truly cared for the school and the program.”

Although the team won just three games in 2016, progress was evident. Parker Giarratana -- the first student-athlete Kelleher recruited to Riverdale -- led the team in scoring, was named the MAAC Rookie of the Year and one of the top 25 freshmen in the country by Inside Lacrosse. Fellow freshman Dylan DeMuro joined Giarratana on the MAAC All-Rookie Team, and sophomore goalie Michael Zingaro started all 15 games in his first full season, including a highlight-reel goalie goal. Eighteen new faces will add talent and depth to the 2017 squad.

Not only did Kelleher make the team more competitive on the field in 2016, he has quickly reconnected generations of men’s lacrosse alumni, including members of the club teams of the 1980s and more recent graduates. Kelleher has started an annual on-campus networking event with alumni from different careers and backgrounds, and current student-athletes. The events have enabled student-athletes to learn more about potential internships and job opportunities within the Jasper alumni network, while the alumni and students can share stories about playing lacrosse and establish a common bond with those who have come before them.

“There’s definitely been a concerted effort to reach out to alumni,” said Nick Silva ’04, a member of the Manhattan College Athletic Hall of Fame who was named the MAAC Player of the Year after that 2002 championship season. “Drew and [assistant coaches] John Odierna and Andrew Hodgson have been keeping us engaged and connected with the program through emails and social media and the in-season and off-season events. That speaks volumes to alumni.”

The Jaspers open the 2017 season on Saturday, January 28 with an exhibition at Adelphi, then host Bryant on Saturday, February 4 for the first of three straight home games at Gaelic Park on Saturday afternoons.

“I feel like we’re very well-positioned after the first year,” Kelleher said. “Last year, we laid a foundation for a championship culture, where we can be a place that’s a really good program year in and year out.”