A weekend of events brought hundreds of former Manhattan College students to Riverdale. 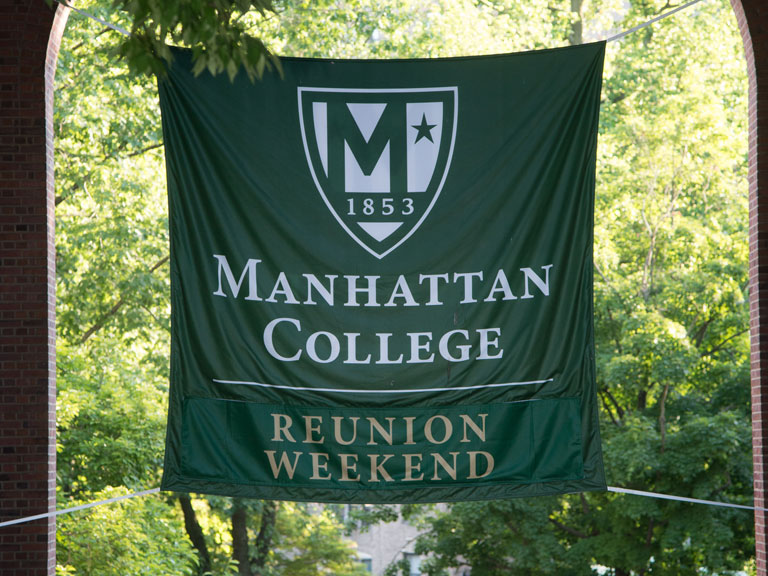 Nearly 650 Jaspers returned to campus the weekend of June 3-5, 2016, for the College’s most well-attended reunion celebration in recent history. In its 147th year, the annual event boasted a number of successes and milestone anniversaries.

The College’s Alpha Sigma Beta fraternity chapter toasted 110 years at a twilight reception Friday evening, as the Class of 2006 commemorated 10 years with a $25,000 gift to their alma mater.

Meanwhile, the Class of 1966 celebrated their 50th anniversary by setting sail on New York Harbor for the Golden Jaspers Cruise complete with dinner, drinks and dancing. On Saturday, members of the Class of 1966 attended the Golden Jaspers Luncheon, where they presented their collective donation of $400,000 to Manhattan. Graduates of 1966 received jubilarian medals and Jaspers celebrating 55th, 60th, 65th and even 70th milestones received anniversary plaques from College president, Dr. Brennan O’Donnell, Ph.D.

Also honored over the three days were graduates from 1991, celebrating their 25th anniversary with a champagne toast Saturday evening.

Earlier on Saturday, the Green & White picnic was enjoyed by all alumni and their families, which included more than a few future Jaspers. Then came the Reunion Vigil Mass in our beloved Chapel of De La Salle and His Brothers, where attendees were able to view a dozen newly restored stained glass windows that illuminate The Life and Work of John Baptist de La Salle.

Spirits couldn’t be dampened by the rain that drenched campus on Saturday evening; more than 300 guests still attended the Reunion Weekend celebration dinner under the tent on the Quadrangle and dance party in Smith Auditorium.

Not to be overlooked in this year’s roundup of Reunion highlights is the annual Plumbers Club Symposium and Dinner, held on Thursday, June 2, before the weekend festivities began. More than 100 attended the event, which is a gathering of the Environmental Engineering Alumni Club.

It's not too early to be thinking about next year! Check back here for updates on Reunion Weekend 2017. You may also contact the Alumni Relations office at (718) 862-7432 or alumni@manhattan.edu with any questions about your upcoming anniversary or the weekend celebration.