A Mass and ceremony on Apr. 7 celebrated the installation of windows illuminating the life and work of Saint John Baptist de La Salle. 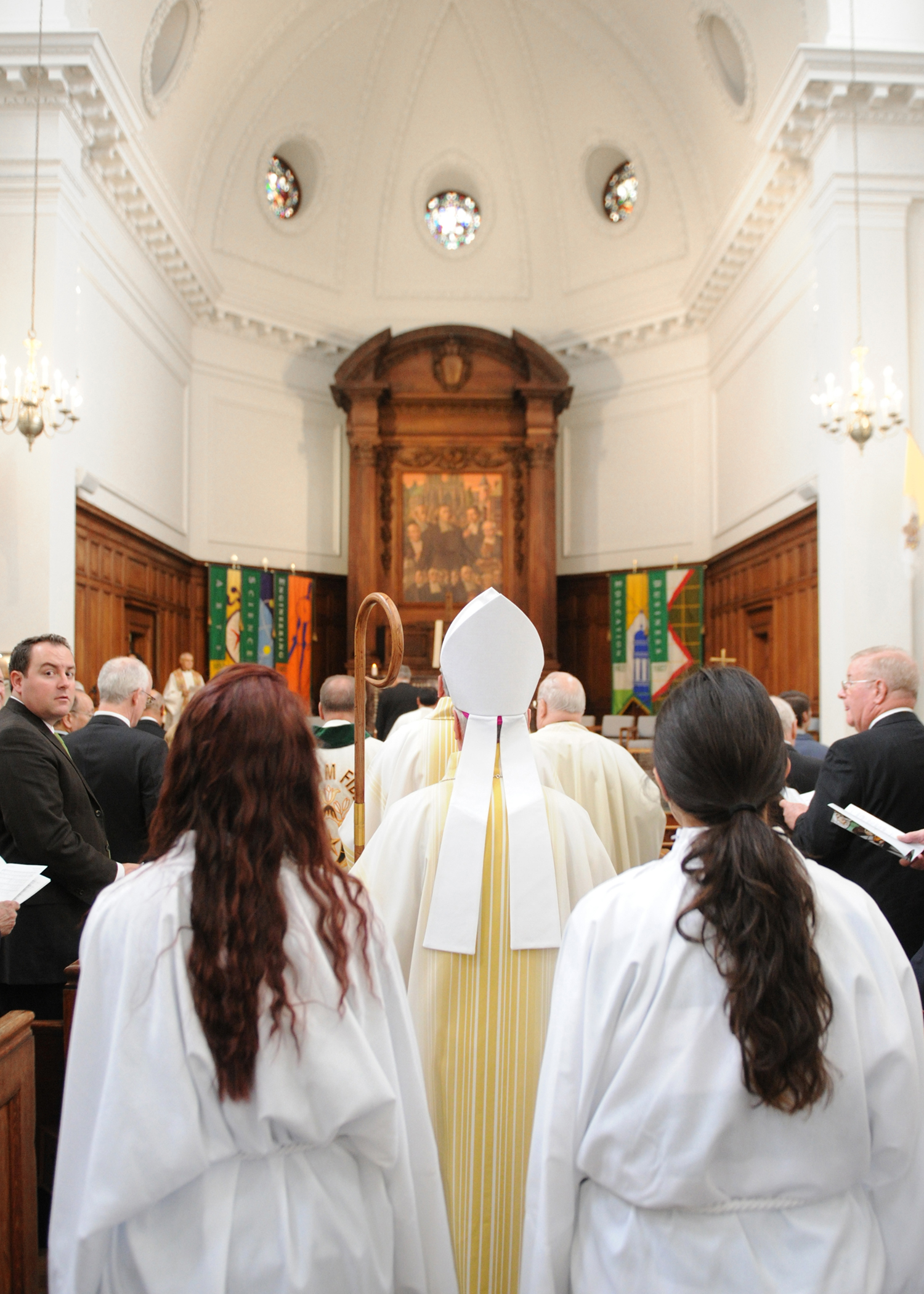 Beams of blue, red, yellow, green and purple light pour into the College’s Chapel of De La Salle and His Brothers, and onto more than 400 guests who immediately collapse into applause.

It’s the morning of April 7 and the blackout curtain that previously shrouded the first of 12 stained glass windows depicting The Life and Work of Saint John Baptist de La Salle has been removed, making way for the first scene: the Nativity of our Lord.

The 20th century collection of French windows, which intertwine the stories of our Lord and the life and work of Saint John Baptist de La Salle, were formally dedicated by the College during a Mass and ceremony held that day in the Chapel. There, the windows were presented and blessed by The Most Reverend, John J. Jenik, Auxiliary Bishop for the Archdiocese of New York.

A History of the De La Salle Windows

The De La Salle Windows were installed at Manhattan in early 2016 after a yearlong process of restoration by Rohlf’s Stained and Leaded Glass Studio, who brought them back to the original magnificence wrought by the renowned French workshop of L. Mazuet et fils of Bayeux.

Following their creation in the early 1900s, the De La Salle Windows were installed at the Christian Brothers’ Novitiate in Pocantico Hills, N.Y., from which they were moved in 1930 to the chapel of the Brothers’ Novitiate in Barrytown, N.Y. They were reacquired in 2015 after James Casey and John Hannaway, who serve as co-chairmen of the District Council of the District of Eastern North America (DENA) De La Salle Windows Campaign Committee, spent 14 years researching and reclaiming the windows for the Brothers community. Casey and Hannaway’s efforts in this mission were recognized at the dedication ceremony by President Brennan O’Donnell, Ph.D.

A Reflection of the Past and Look into the Future

“These beautiful works of art, these treasures – reacquired, restored, and today rededicated – are from today forward an important part of our continuing work in fostering the mission of Manhattan College as a Lasallian institution,” Dr. O’Donnell said in remarks at the dedication ceremony, which followed a Mass to celebrate the Feast Day of Saint John Baptist de La Salle.

But the windows don’t only symbolize where we came from. They also predict who we’ll become. Brother Gustavo Ramírez Barba, FSC, Ed.D., who serves as General Councilor for Lasallian Higher Education at the Institute of the Brothers of the Christian Schools, relayed this sentiment in his address to the College community.

“The wonderful De La Salle stained glass windows will reflect colors in the interior walls of this magnificent chapel; by doing so they will tell a story of the origins of this Lasallian family and invite all who enter this Chapel to continue to bring to life this story in our world today,” said Br. Gustavo, who was honored at the windows dedication ceremony with a doctorate of pedagogy from the College.