Bronx Beats: If But When Embraces Riverdale Roots in Its Music 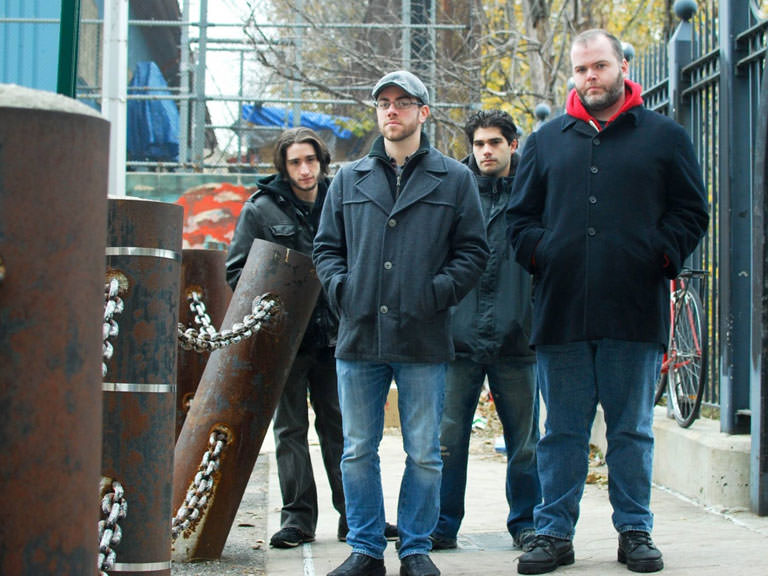 Manhattan College recently added an emerging musical group to its list of impressive graduates. Brothers Anthony Forzaglia ’06 and Tom Forzaglia ’11 credit the College with influencing them during their rock and roll journey.

Anthony formed If But When with his friend Sean Donovan in 2009. Anthony and Sean had been playing music together since their years in elementary school in the Pelham Bay section of the Bronx. “We called our first group Royal Flash. We were trying very hard to be Oasis and Green Day at the same time,” Donovan admits. When their mutual friend Eric Bell and Anthony’s brother Tom joined the band shortly after, the current quartet was set.

Bell had been a fan of the band before he joined, and knew the group through David Andronico, who produced and recorded the group’s first album. A chance meeting with Anthony at An Beal Bocht in Riverdale led to Eric’s audition and the full-time drummer job.

After the band’s previous lead guitarist decided to leave the group, the group had a hole to fill quickly before a show at The Bitter End, the legendary Greenwich Village venue. Buoyed by an independent guitar study with professor Daniel Garcia, Tom followed his older brother’s lead to step in at the show. That performance served as a springboard to several other shows around the area for the group and allowed Tom to become the permanent lead guitarist.

“I was a few months removed from my guitar independent study at Manhattan College and was practicing heavily at the time,” Tom says. He took bass lessons in high school, and decided to take the Intro to Guitar class as an elective during his senior year. “Being accepted into the guitar independent study and being able to learn from an amazing guitarist like Professor Garcia was memorable,” Tom explains. The opportunity in the College’s Visual and Performing Arts department gave Tom the confidence to join the group and cemented his passion for music.

Even though their love of music blossomed in their youth, Anthony and Tom advanced their sounds in Riverdale.

“One of my favorite musical memories at Manhattan College was when Sean and I would rehearse. We would set up anywhere. Lots of students came by to watch and listen to us play, which was awesome,” Anthony says. “I also met a lot of really smart, nice people at Manhattan College — some of whom continue to be my good friends.”

The group has released several singles and EPs (extended plays) but makes its mark as a touring group. They take pride in their Bronx roots, often performing at An Beal Bocht, steps away from the Manhattan College campus. The group also filmed part of its latest music video, “The Franklin Avenue Shuttle,” on the rooftop of the Broadway parking garage with the 1 train passing by in the background.

“We all love music — listening to it, playing it and going to concerts,” Anthony says. “The band started as a hobby we enjoyed. Now it has progressed to something more than a hobby.” If But When has opened for several popular acts including Augustana, Marc Cohn and John Nolan of Taking Back Sunday. The band also has played throughout the Northeast and has taken the stage at the hallowed halls of Arlene’s Grocery and Kenny’s Castaways in New York City.

In between shows and recording, each band member has a full-time job. Sean works at a music school in Westchester County, Eric is a video editor and producer, while Tom is a computer programmer and Anthony is an attorney. Like many up and coming groups, the band stays active on social media and is working to get its new album on iTunes and all streaming platforms to reach a worldwide audience. With the hard work If But When has put in, many fans may be able to say they knew them when they were Jaspers, on the verge of stardom.