Now a scientist at the Harvard-Smithsonian Center for Astrophysics, John Remo's ’63 career has focused on defense against deadly Earth-bound asteroids. 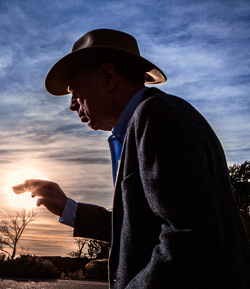 The threat of a potentially deadly asteroid colliding with Earth is not just a Hollywood disaster scenario. According to John Remo ’63, Ph.D., a scientist at the Harvard-Smithsonian Center for Astrophysics, it’s an inevitable reality. Remo, an authority in a variety of fields including planetary science and high-energy density physics, devoted the past 20 years of his life to preparing an eleventh-hour defense against Earth-bound asteroids.

It all started at the 1992 Los Alamos National Lab conference on asteroid defense, the first major meeting for astronomers and weapons lab researchers to explore options for intercepting threatening near-Earth objects. Although a lot of deflection theories were discussed at the conference, Remo recognized very early on that simply ramming a spacecraft into an asteroid wouldn’t be enough.

“What was realized during the Los Alamos conference was that you needed a large amount of energy to deflect an Earth-bound object,” Remo says. “Nobody wanted to admit you had to use nuclear explosives — it’s a very sensitive subject — but it’s the only way.”

From Brooklyn to New Mexico

Remo felt called to the field of physics after reading Inside the Atom by Issac Asimov during his sophomore year at Brooklyn Preparatory School. He chose Manhattan for its academics and convenience.

During his years in Riverdale, Remo honed his writing skills as the physics editor of the Manhattan Scientist, the College’s academic journal. “It was an introduction to the world of publishing and an important experience for me as a young academic.”

After graduating with a B.S. in physics, he continued his graduate studies at the State University of New York (SUNY) in Stony Brook, before getting his Ph.D. in quantum optics at the Polytechnic Institute of New York University. He was awarded the 1972-73 Nininger Meteorite Award, and in 1999 was given the honor of having Asteroid 2114 T-2 — a non-Earth threatening asteroid — named after him.

Seeking autonomy, Remo started his own firm, Quantametrics, where he developed high-powered laser technology for clients such as NASA and the “Star Wars” missile defense program. He also led the 1995 United Nations International Conference on near-Earth objects and edited the conference proceedings, which were published in 1997. Shortly thereafter, he was approached by Harvard–Smithsonian with appointments in the department of astronomy, and then the department of planetary sciences.

Using proceeds from his firm (and eventually funding from the National Nuclear Security Administration and other federal agencies), he set out to answer how much nuclear radiation would be needed to blast any given material off course.

Thanks to his intensive study of meteoritics during graduate school, it was clear to Remo there was more to the asteroid defense problem than nuclear energy. He realized that he would need to figure out its material properties to best predict a meteor’s response to nuclear radiation.

He spent nearly a decade gathering meteorite samples, and finally, in 2000, gained access to the Sandia National Laboratories’ Z machine, a platform for studying the physics and effects of nuclear explosions.

“A combination of the high energy density physics and meteoritics equipped me with the scientific and engineering background to exploit the Z-pinch machine at the national lab,” he says. “That’s the only place I could design my own experiments using those high powered lasers, and the high intensity Z-pinch X-ray source, which I also use for high pressure physics interactions.”

It was so crucial that he elected to relocate from Long Island, N.Y., to Placitas, N.M., in 2005, to take advantage of the rare occasion when the lab became available. With the help of Sandia physicist Michael Furnish, they discovered a way to effectively move very small-scale asteroids with radiation. Now that they have researched an effective eleventh-hour strategy, the problem of testing and implementation remains. Tests involving nuclear warheads are, understandably, highly political.

His most recent contributions to the field address these concerns. “The Dilemma of Nuclear Energy in Space,” published in the May/June 2015 edition of Bulletin of the Atomic Scientists, discusses whether nuclear explosives are a barrier or a path to long-term human survival.

No Retirement on the Horizon

Despite the controversy, Remo’s life work is becoming a part of the national conversation. In June, the nation’s agencies that build civilian rockets and nuclear arms agreed to start working together on planetary defense — an enormous first step. There’s also a rise in public interest in asteroid deflection, including a first-ever global awareness campaign called Asteroid Day, which was held on June 30.

Today, at 73 years old, Remo has no intention of slowing down. His view of retirement includes idle conversation and reality television — neither of which he wants any part.

Despite the overwhelming probability that his contributions to the field will help to save civilization as we know it, he remains humble and highly focused.

“Maybe I played a key role in certain parts of the research, but it’s a cooperative effort,” he says. “There’s a lot of work yet to do.”

Photo Caption: John Remo ’63, Ph.D., holds a fragment of a chondritic meteorite, near his home in the high desert village of Placitas, N.M. Remo says the material is typical in most common asteroids, and the fragment is about 4.6 billion years old, describing it as “planetary building material.”  Photo by Mark Holm © 2014 for Discover Magazine