Students working for the College’s Center for Academic Success recently tutored high schoolers in New York City for the SAT and are now assisting them on various aspects of the college application process. 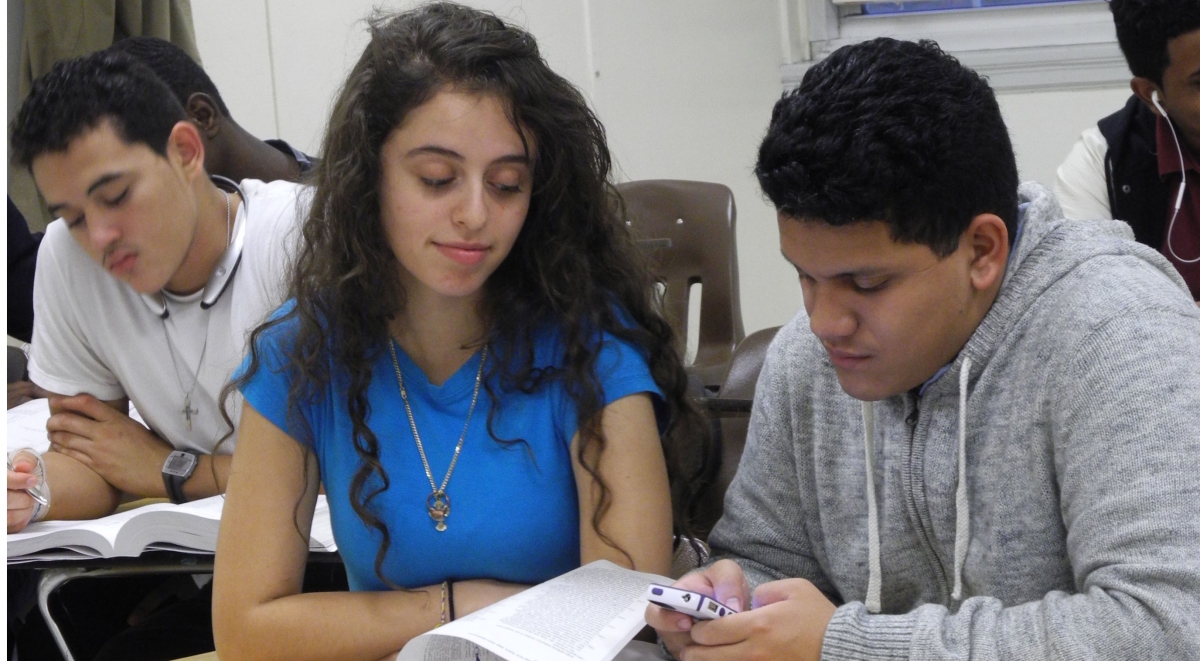 Huddled in a group of high school students seated around a conference table in Manhattan College’s Center for Academic Success (CAS), writing tutor Taylor Purcell ’16 asks cautiously, “So, how are you all feeling about this weekend’s test?”

Her question, posed at a party in November to wrap up a series of SAT prep sessions held throughout the semester, wasn’t met with the series of groans you might expect from a room of teenagers gearing up to take the grueling exam. “I’m definitely more confident this time around,” said David Hawkins, a senior from Metropolitan High School in the Bronx who, along with more than a dozen others from various low-income areas of New York City, spent the previous two months preparing for the test with Manhattan student tutors. Dorian Persaud ’16 and Christopher Hoey ’17 offered assistance with mathematics, while Krystal Diaz ’16, Amanda Fernandes ’16, and Purcell took verbal and writing.

After working with them one-on-one, Hawkins overcame his share of struggles, joking later, “To do well in math, you have to tell yourself you love it.”

He, along with most others enrolled in the SAT prep program, also came for the College’s Summer Literacy Institute (SLI), held in July for the sixth consecutive year. This was the first time the program was run without a grant from the Teagle Foundation, which had supported it in previous years. When their contribution ran out this year, Manhattan funded the rest.

This allowed some 30 teens a weeklong glimpse at campus life, lodging in the dorms and studying together for courses led by College professors—philosophy with Dave Bollert, Ph.D., religious studies with Stephen Kaplan, Ph.D. and biology with Michael Judge, Ph.D. They also received one-on-one guidance drafting college admissions essays from Dan Collins Ph.D, a former English professor at the College.

According to Marisa Passafiume, assistant vice president of CAS, students who attended the SLI responded so positively to the summer sessions that they were the ones who asked to come back for SAT tutoring.

“The synergy between College professors, mentors and the students who came for SLI made the fall program take off,” she said. “They not only reached their potential there, but were also surprised to find people in the College community who wanted to help them learn.”

According to Purcell, the students’ continued motivation was palpable in the afternoons she spent teaching reading comprehension and the rules of grammar.

“[The students] really want this. They’re coming here after school because they want more. It’s great to be around good kids that we’ve developed a connection with,” said the College senior.

Mars Dias, a senior from Aviation High School in Queens who participated in the SLI and came back for SAT prep, said a number of factors influenced his return to campus in September. “We made a lot of friends over the summer and created a family here at Manhattan. We’re learning and getting the benefits of being here, and were able to extend our College experience.”

Fortunately for Dias and his classmates, there’s still more to come. Following the SAT exam on November 7, Passafiume and her CAS colleagues began planning a series of activities through the winter and spring that are both fun and educational, beginning with a Jasper men’s basketball game on November 28 and continuing with a workshop the second week of December to educate students on the ins and outs of receiving college financial aid.

Then in January, when SAT scores are released, they are invited back to campus to review them with College mentors who helped students prepare in the fall. Springtime will bring a visit to the Museum of Modern Art and a workshop geared toward introducing high school seniors to the different fields of study they may pursue in college.

Passafiume says this rolling agenda is imperative for students — especially those from low-income backgrounds — to stay on track for graduation and beyond.

“The follow-through is huge,” she stresses. “The students are great when they’re here but are not receiving a lot of guidance once they leave, so we try to give them constant reinforcement on different steps of the application process.”

According to Passafiume’s 2015-16 activity schedule, the group will meet for the last time next June, at which point they will discuss their decisions on what college they’ve chosen to attend in the fall. After that, CAS will start the process all over again with a new batch of high schoolers when the SLI gears up for its seventh year in July 2016.