Irish Ambassador David Donoghue to Speak on Campus on Dec. 2

The representative of Ireland to the UN will visit campus and discuss the 2030 Sustainable Development Agenda. 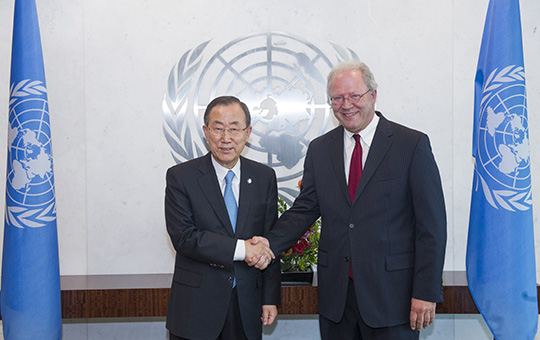 On Wednesday, Dec. 2 at 4:30 p.m., Ambassador David Donoghue, representative of Ireland to the United Nations (UN) and co-chair of the 2030 Sustainable Development Agenda negotiations, will speak on Manhattan College’s campus. Donoghue will discuss Ireland’s role in the negotiations process and the Sustainable Development Goals and what this agenda means during the next 15 years.

In particular, Donoghue will highlight the role of students and youth in creating a more sustainable and equitable future.

Throughout his career, Ambassador Donoghue has served his home country of Ireland, most recently as political director of the Department of Foreign Affairs and Trade in Dublin from 2009-2013. He also worked as Ambassador to the following countries: Germany (2006-2009), Austria and the Vienna-based United Nations agencies (2004-2006), and Russian Federation (1999-2001), with side accreditations to Belarus, Georgia, Armenia, Azerbaijan, Kazakhstan and Uzbekistan. In addition, he was Director-General of the Irish Government’s development cooperation program (Irish Aid) in 2001.

During the first two decades of his career, Ambassador Donoghue held several posts including the Irish Embassies in the Holy See (1977-78) and Germany (1978-1983), the Irish Permanent Mission to the UN (1987-1988), and the Irish Embassy in London (1988-91). He was also seconded to the French and Italian Foreign Ministries (1984-85) as part of a support service for what is today the EU’s Common Foreign and Security Policy.

The event is free, open to the public, and will be held in the Kelly Student Commons, room 5C, from 4:30 to 6 p.m. “The United Nations 2030 Sustainable Development Agenda: How it came about and what it means for you?” is co-sponsored by the Government department, the Peace Studies and International Studies programs, Catholic Relief Services Faculty Task Force Campus Ambassadors, and Campus Ministry and Social Action.

For more information, please contact Pamela Chasek, Ph.D., professor of government and chair of the department, at (718) 862-7248 or pamela.chasek@manhattan.edu.