An unexpected roster of students is enrolled in Mehnaz Afridi’s seminar. 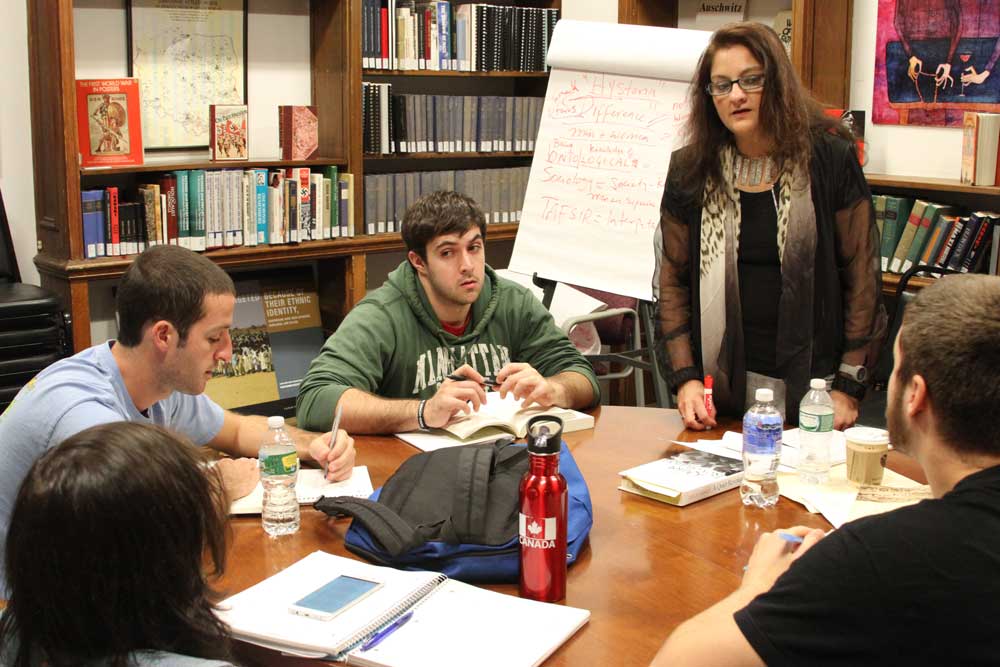 Like most classes at Manhattan College, the Women & Islam senior seminar, taught by Mehnaz Afridi, Ph.D., assistant professor of religious studies, is small in size but mighty in thought.

Each week, as they gather in Room 315 of the O’Malley Library, Afridi’s five students — five men, in fact, all raised in Christian faith traditions — seek to understand one of the world’s most stereotyped groups of people.

“This is really the first class I have taken that emphasizes the vantage point of women over men, and for this reason, the class has been quite valuable,” says history major John Maiocco ’16.

“It’s important to show students, especially male students, how women can be empowered when they’re given a voice and a chance to be who they are,” says Afridi, an internationally recognized expert in interfaith dialogue and director of Manhattan’s Holocaust, Genocide and Interfaith (HGI) Education Center.

One topic the students have really embraced in discussion, Afridi explains, is the hijab, the head covering that some Muslim women wear. While the hijab is sometimes seen by Westerners as a symbol of oppression, “increasingly [the students are] recognizing that the choice to wear it or not wear it is power over one’s sexuality and image,” she says.

A prime example is Ibtihaj Muhammad, the 2014 women’s world fencing champion, who could become the first Muslim-American woman to compete in the Olympic Games in a hijab. For his final project, one of Afridi’s students is examining how Muhammad’s decision to compete in a hijab has contributed to her confidence, success and status as a role model for minority athletes.

Eager to expose her students to more influential Muslim women and extend the learning experience outside of the classroom, Afridi introduced the class to friend and colleague Daisy Khan, executive director of the American Society for Muslim Advancement and head of the Women’s Islamic Initiative in Spirituality and Equality (WISE).

Afridi’s students are encouraged to visit WISE throughout the semester to help with an important effort to combat the threat posed by the self-proclaimed Islamic State known as ISIS.

“We asked them to conduct research and edit articles for our current project, a community guide for Muslims that dismantles ISIS ideology and provides narratives of peace for Muslims,” says Lisa Nakashima, program manager for WISE.

“I helped them find statistics about non-Muslims converting and joining ISIS,” adds Derek Smith ’16, a religious studies and history major, who visited WISE and plans to go back. “The overall experience was great. I learned a lot and the people who worked there were so kind.”

Back in the classroom, on a Friday late in the semester, the students discuss the inclusion of Muslim women in Islamic leadership before heading back out into the field — this time to observe Jummah, or Friday prayer, in Horan Hall.

“This class has dispelled the notion that Muslim women are all forcibly subjugated by men through their religion. There is an active female presence in Islam, and it continues to grow,” Maiocco says. “Not only do I have a better understanding of Muslim women and the role they play, but it has allowed me to see just how pervasive gender roles are in our society as a whole.”

Seeing the change in her students, Afridi is hoping to make Women & Islam a permanent fixture in the Manhattan College course catalog.

“Muslims are fed up with the stereotyping of Islam,” she says. “And if they can get that out of [this class], I’m a happy professor.”