Michael ’81, Fausta ’82 and Joseph McDermott ’15 wrote and illustrated The Concert Hall Cats, which they published in May 2015. 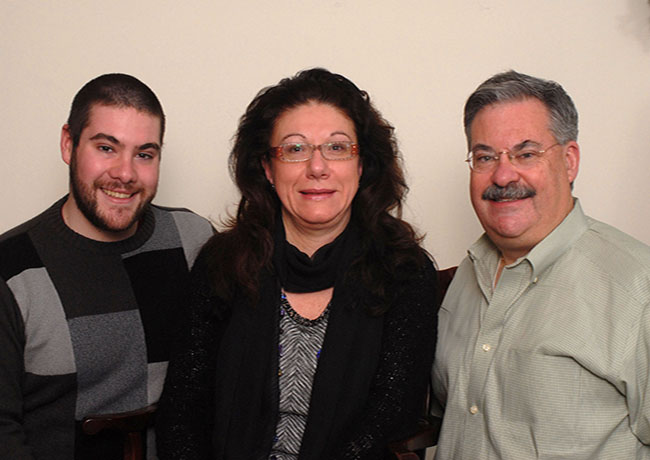 That’s one way to describe the production of The Concert Hall Cats, a children’s book authored by husband-and-wife team, Michael ’81 and Fausta ’82 McDermott, and illustrated by their son Joseph ’15.

Available on Amazon.com since May 2015, the story introduces readers to Horatio the Cat, his wife Sofia, and their two children, Eddie and Mary, who embark on a mission to save their home — the attic above an old concert hall. Faced with the possibility of the venue being torn down and replaced by a parking lot, the family of cats devises a plan to fill all seats in the house for its final performance. If they succeed, the hall’s landlords will recognize its value and reconsider their decision to close.

Despite the recent release of The Concert Hall Cats, Michael and Fausta, both Manhattan College graduates, came up with the story idea more than 20 years ago on a series of long walks they took early in their marriage, when they would discuss their future plans.

“We would talk about the house we would live in and the future we would build,” Michael remembers, “The story was something we created together.”

Years later, their son Joseph made the story come to life in pictures, and together, the family founded the independent publishing company, Beautiful Tree Publishers, Inc. Joseph graduated this spring from Manhattan with a bachelor’s degree in peace studies and has since begun work at the Metropolitan Museum of Art in New York City, where he plans to grow his career and continue pursuing illustration on the side. According to Fausta, Joseph may also consider pursuing a master’s degree in fine arts or psychology.

Joseph wasn’t the only McDermott family member who played a role in The Concert Hall Cats. The story includes an illustrated version of Fausta’s father, who appears as Jimmy the Janitor, while the McDermotts’ four sons, Joseph, William, John and Phillip appear as owners of the dogs who come to the hall’s final performance.

The McDermotts’ book is primarily marketed to children, but they say its themes can be appreciated by all ages — the most significant being its emphasis on preserving the arts. The threat of arts venues and programs being cut for financial reasons is all too common, Fausta says.

“The value of live performances and the ability to create art are things that can’t be matched,” Fausta says. “When you’re involved in drama at a young age, you’re learning discipline, how to work with others and how to be on a team. These are life skills.”

Fausta is actively involved in arts programming at Manhattan College, having served on the board of advisors for the School of Liberal Arts since 2013. She’s also a board member of the Schoolhouse Theater, a nonprofit organization in Croton Falls, N.Y.

While the family’s ties to Riverdale are visible in some of the imagery in The Concert Hall Cats, the story’s message of banding together for something you believe in is truly Lasallian in nature.

“We’re three graduates from the same school, and came out with the same values we learned at Manhattan,” Michael adds. “The fact that we worked together and wrote and illustrated the story is a good way to show the potential of what three alums can do.”