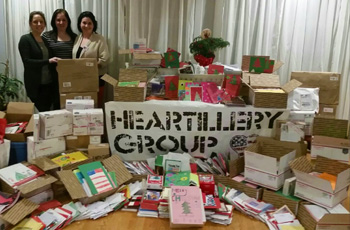 Just a few short months after Emily (Gordon) Spencer ’03 married fellow Harvard Extension School graduate Scott Spencer, a U.S. Army reservist, she found herself alone in a new home and a new community in Norwood, Mass. Scott and his unit, the 532nd out of Brockton, had been deployed to Afghanistan for an 11-month tour.

To cope, she began writing him cards and sending him cookies. “I thought since he was the commander of the unit that maybe he had access to more people who were in need of cards or support or packages,” she says. “I put out a message on Facebook in late October 2012 and set a goal of 1,000 cards. I figured if it didn’t work out, I would just sit down and write 1,000 cards myself and not tell anyone.”

That was the beginning of Heartillery Group, a nonprofit organization whose mission is to show support, love and gratitude to American troops serving overseas by sending cards, letters and care packages. In 2014, its second year running, Heartillery collected an impressive 160,000 cards from 50 states and four countries.

“I couldn’t even imagine that I would be sitting here a year later with this sort of infrastructure for spreading love,” Spencer says. “But it’s called Heartillery Group for a reason; once you send us a card, you become part of our global Heartillery to make sure that these, our service men and women, aren’t forgotten.”

This outreach was particularly important during the 2013 government shutdown that left many troops overseas feeling abandoned by their country.

“During the shutdown, it really shook the troops and their sense of self, their sense of country,” Spencer says. “As a military wife, to be able to bring 17,000 cards from private U.S. citizens — I just couldn’t be more grateful for that uplifting support from this country.”

When her husband is deployed, she serves as leader of Family Readiness Group for the 1173 Battalion, a civilian position within the Army that helps families with deployment issues — anything from financial concerns to checking if their spouse is safe. When her husband is home, Spencer heads up the Financial Planning Strategist team at the Bulfinch Group, specializing in small businesses and military families.

“We want to make sure that we can take care of them financially, so that when they do deploy, the sacrifices that they make get maximized through their financial education,” she says. “We really feel like we can encompass the entire family whether they’re military or not.”

Spencer says her journey has been a process of turning lemons into lemonade.