George Giakos, Ph.D., to receive the 2014 IEEE-USA Professional Achievement for Individuals Award in May. 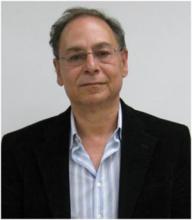 George C. Giakos, Ph.D., professor and chair of the electrical and computer engineering department and director of the graduate program, was recently selected as a 2014 recipient of the IEEE-USA (Institute of Electrical and Electronic Engineers) Professional Achievement for Individuals Award. As a recipient, Giakos is recognized for his leadership efforts in advancing the professional goals of IEEE in the northeastern region of the U.S., and will receive the award at the IEEE-USA Awards Ceremony in Milwaukee this May.

IEEE is the world’s largest professional association dedicated to advancing technological innovation and excellence for the benefit of humanity, with more than 400,000 members in over 160 countries.

IEEE-USA credits the award in recognition of Giakos’ “efforts in strengthening links between industry, government and academia.”

Throughout his career in academia, Giakos has conducted research on technology innovation targeted in the design and development of imaging devices, systems and techniques. In particular, he led the first team to explore near-infrared imaging for enhanced lung cancer detection. Another research team, comprised of Giakos’ former students, was the first in the U.S. to pioneer the introduction and characterization of CdZnTe (cadmium zinc telluride) semiconductors for flat panel x-ray displays, as applied to digital radiography, with emphasis on mammography, fluoroscopy and computed tomography (CT).

“This award offers me enormous happiness, because it is a reward of my students’ efforts to excel and become true leaders in science and the engineering profession,” Giakos said.

As a result of Giakos’ research, he has authored more than 200 peer-reviewed papers and 10 book chapters and has received 20 patents. He has also collaborated on projects with the U.S. Air Force, NASA, the National Academy of Sciences, Lockheed Martin, Philips, University Hospitals, the Cleveland Clinic, Varian Medical Systems, and the U.S. Naval Research Laboratory.

Giakos earned a doctorate from Marquette University and a master’s from Ohio University. He is a fellow of the IEEE.