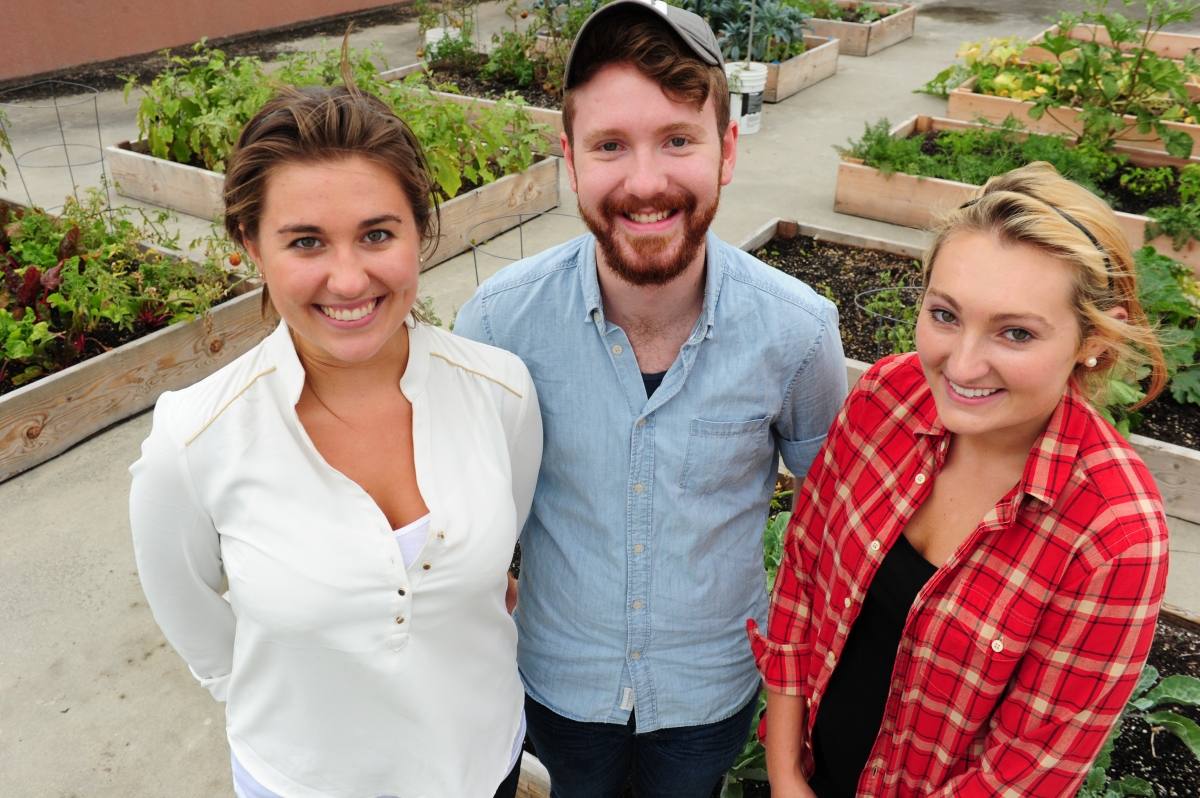 Where does your food come from?

English major Gavin Sass ’15, a 2014 Center for Urban Resilience and Environmental Sustainability (CURES) Urban Agriculture Intern, explains that many of us never consider the long chain of events required to deliver an apple grown and harvested in Chile to a New York City grocery store.

“Our food chain is so long and just hanging in the balance,” Sass says. “If any of the links in New York’s food chain were to break, we would would only have enough fresh food for three days, which is a really scary fact.”

Sass, along with fellow interns Samantha Brand ’15, a mechanical engineering major, and Delaney Higgins ’17, a mathematics major, spent the summer focused on shortening that food chain for the Bronx community by helping to grow food within city limits. In addition to expanding the College’s rooftop garden, they shared their urban farming know-how with area community members at Montefiore Medical Center and Marble Hill Community Center.

Their crops, which yielded spinach, chard, kale, beets, snap peas, tomatoes, broccoli and more were sold in support of Groundwork at nearby Yonkers Farmers Market. The team also harvested more than three gallons of honey from the College’s bee house located on the north end of garage rooftop.

“I learned more than I thought I could learn in such a short period of a time,” Sass says. “Within the first four weeks of the internship, we learned everything that we really needed to know and were ready to share our knowledge with others.”

Manhattan College teamed up with the Marble Hill Tenants Association, New York City Housing Authority Gardening and Greening Program, Riverdale United Nations Association, and Las Verdolangas Collective to launch the intergenerational community gardening project on Broadway at West 228th Street. The project also included a youth garden on the opposite side of the street near the Marble Hill Community Center. Both were established with the intent of improving the residents’ environment and overall well being.

Sass, Brand and Higgins took turns teaching youth in grades K-6 about recycling, planting and harvesting as well as how to use and prepare the yields which included fresh herbs.

“We’re trying to get the kids to see that you don’t have to have a farm or a huge backyard to grow your own food,” Higgins says.

“It just feels really great to be part of the urban agriculture movement that's taking off in New York City and other cities around the world,” Brand says. “Now there’s a buzz about green roofs, you see gardens lining the streets of the city. It’s a very cool look at where our food comes from and it kind of brings people a little closer together having a garden so close in the middle of a huge city.”

On a warm day in mid-September, the interns and adviser, Myers, hosted a Rooftop Farm Tour, celebrating another successful growing season by inviting the Manhattan College community to explore the lush and inviting garden-scape on top of the Broadway Parking Garage.