John Swenson ’72 looks back on an adventure-filled career that started on campus with the Quad. 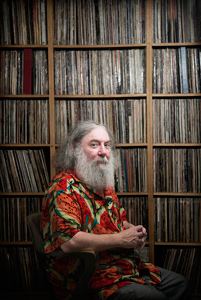 When it comes to pop culture and music memorabilia, there are two types of collectors: those who collect collectibles, and those, like John Swenson ’72, a luminary music journalist, who collect stories.

The walls of his enchanting home in Brooklyn’s Park Slope neighborhood bear evidence of this: from original rock festival posters to gold LP records — even an original print of Patti Smith’s Dream of Life cover photograph, personally signed.

It is obvious Swenson didn’t obtain these priceless items via eBay; every item contains a personal experience, one that undoubtedly shaped his illustrious writing career.

A syndicated columnist for more than 20 years at United Press International (UPI) and Reuters, Swenson served as editor for Crawdaddy, Rolling Stone, Circus, Rock World, Offbeat and other publications. He is the author of 14 books including The Rolling Stone Jazz Record Guide; Stevie Wonder; and Bill Haley: The Daddy of Rock and Roll.

In fact, he’s been writing about popular music since 1967, when he got his first column in The Quadrangle.

“I learned pretty much everything I know about journalism working at the Quad,” Swenson says. “I wrote news and sports stories and mostly music and film reviews and cultural type of pieces. I honed my craft later, but it was really, really rewarding.”

Swenson quickly rose through the ranks to editor-in-chief of the publication before being drafted for Student Government president at the end of his junior year.

As a student, he attended a show at the Fillmore East theater just days after the assassination of Martin Luther King Jr., and realized his life’s calling. In response to the riots that were happening around the nation, a city-wide curfew was enforced, and only a fraction of ticket holders made it to the show that included legendary performances by the Free Spirits, BB King, and most notably for Swenson, The Who. He snuck up on stage behind their speaker cabinet to catch their set.

“Keith Moon was [three feet away] and was just looking at me the whole time during the show,” he says. “That experience, just being involved in it was a turning point in my life. I realized that I had to try to explain to people what it was that I was experiencing here and how amazing, emotionally powerful and spiritually powerful it was.”

Profiled in the Quad as a senior, Swenson was asked what he wanted to do with his life. He responded, simply, “write a book on The Who” — a project he accomplished after following the band on their Who’s Next tour, which was published in 1979.

Swenson’s writing talents aren’t limited to music. In fact, it came as shock to some when, in the midst of a UPI collapse in the early 1990s, he went to work for the New York Post as a horse racing columnist and handicapper. He also covered the New York Rangers for UPI and later the Associated Press, and enjoyed the thrill of pushing the button and filing the story as the final buzzer sounded.

“I try to tell a story every time I write,” he says, noting that the lessons that he learned at the Quad became quite useful during these career shifts.

To date, the project he’s most proud of is his latest book, New Atlantis, a detailed account of musical artists working to save New Orleans in the wake of Hurricane Katrina. Swenson lived the tale, as he had been splitting his time between Brooklyn and New Orleans since 1999 after he finished The Rolling Stone Jazz and Blues Album Guide, a daunting project that, up until that time, was his life’s work. Feeling as though he was at the end of a journey, Swenson decided to immerse himself in the style of music and culture he loved, but felt he had yet to truly discover.

He became obsessed with learning about New Orleans musicians and their lives. Post-Katrina, the city abandoned and in ruins, Swenson feared it would never be rebuilt. But as the musicians returned and told their stories, he collected them.

“New Atlantis just appeared in front of me as I was doing that work,” he says. “That book is what I spent my whole life preparing to be able to do. And I’m very proud of that.”

For a man who has, for more than 40 years, continually and successfully been both character and narrator to modern music culture, Swenson still humbly describes himself as a sort of modern day flâneur.

“I think the things that happened to me seem to have happened by fate or chance,” he says, smiling. “I know it’s a cliché, but you just have to follow your heart on that one.”