Once a Valhalla Viking and now a Manhattan Jasper, Anthony Amiano ’15 advocates for education reform as a member of the Valhalla School Board. 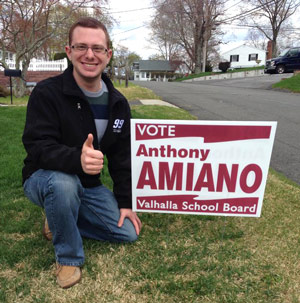 At just 20 years old, Anthony Amiano ’15, a communication major and government minor at Manhattan College, has the résumé of someone who’s been in politics for a decade.

That’s because he has.

Amiano began his political career as an eager 10-year-old, walking door to door in his hometown of Valhalla, N.Y., handing out palm cards and marching in parades as a campaign volunteer.

A decade later and just as eager, Amiano was elected to the Valhalla School Board over incumbent Alan Higgs in May 2014 (602 votes to 241), making him likely the youngest elected official in Westchester County and among the youngest in New York State.

“When I first set out to run for the school board, age wasn’t a hindering factor,” Amiano says. “I really did it because the board needed a fresh perspective, and as a recent graduate, I felt it would be my chance to give back.”

As a proud product of the school district he now serves, Amiano is personally invested in making sure the voices of students, teachers and administrators are heard statewide on important issues from Common Core and professional performance reviews to state tax credits and equitable spending.

“Public education is under such stress in New York, and so many issues are coming from the state level,” he says. “I want to make sure that we’re writing letters, going to the state capitol and meeting, doing whatever we can.”

Having a say in complex reforms requires doing your homework, and Amiano has done just that by attending local events, talking with residents, and blogging about advocacy, all the while keeping up with real homework, too.

“From the very beginning, all of my communication and government courses played some role in my campaign, and talking to my professors has been huge,” says the commuter student, who’s now looking into master’s programs. “Manhattan College has been a deep part of my upbringing and who I’ve become. It’s molded me and made me ready to serve.”

“Government at all levels could use more people like him,” says Thom Gencarelli, Ph.D., associate professor and chair of the communication department. “People who are not in it for their ego or for power, but who pursue elected office and seek to represent citizens and constituents out of a sense of duty; to carry out this essential and good work on our behalf.”

Amiano says putting people before politics is a lesson he's learned from his role models in office. Since freshman year at Manhattan, he’s worked as an aide for Westchester County Legislator Michael J. Smith. He’s also remained close friends with County Executive and Republican gubernatorial candidate Robert Astorino, whose name was on the palm cards he handed out as a 10-year-old. It’s also these relationships that have reaffirmed his decision to stay local.

“I have a vested interest in this community, and I hope to raise a family in Valhalla some day,” Amiano says. “I want to show other students that they can do this, too, that I’m not the anomaly. We, as young people, have great opportunity.”