Dr. Bruce Shockey and his BIOL 232: Evolution class "walk the branch" in the dinosaur wing of the American Museum of Natural History to learn about early species. 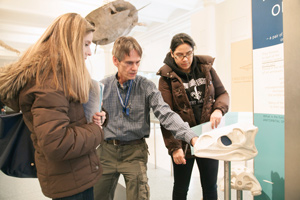 Arriving by subway to 81st Street and Central Park West, Bruce Shockey’s BIOL 232: Evolution class settles in for a film about the dinosaur wing at the American Museum of Natural History (AMNH).

“Welcome to your own extended family history,” the video chimes, as the lights dim.

Shockey, Ph.D., associate professor of biology and a research assistant at the museum, has been hosting hands-on lessons at AMNH for nearly 10 years.

“Some of the principles are hard,” he says. “So to actually walk on the branch, it helps.”

The branch, he explains, is an evolutionary pathway tiled onto the fourth floor of the museum that guides visitors through a larger-than-life genetic journey. Hanging above signs stating “Look Up!” are massive skeletons of prehistoric beasts, as well as some that are more easily identifiable — from pterodactyls to turtles.

As the students wander through the exhibits, learning at their own pace, Shockey has them fill out a worksheet — a collaborative scavenger hunt of sorts. 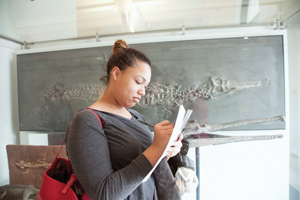 When a student asks a question about tetrapods, he finds a relevant exhibit and explains how these creatures are the best example of the bridge between fish and land vertebrae. He explains the concept in conversational terms, referencing materials learned in the class textbook.

“I want you to get the feel and idea of things rather than the precise answer,” he stresses, acknowledging that it’s more important to understand than simply memorize answers.

When the class finds a massive brontosaurus skeleton, everyone stops for a Jurassic Park-esque photo-op.

“The hands-on experience is cool,” says Giancarlo Schillaci ’16, a biology major. “It’s intimidating seeing all the dinosaurs up close and not just as a picture in a book.”

“Interacting — I think it means more,” adds biology major Zoe Malia ’16, who’s interested in interning at AMNH this summer. “I went on the same tour last year, and I remember things more clearly from then.”

While BIOL 232: Evolution is a required class for all biology majors at Manhattan, Shockey has seen many enjoy the interactive class, including students majoring in liberal arts and religious studies. For visual learners, especially, visiting AMNH’s fossil mammal collection, which, according to Shockey, is one of world’s largest, helps to clarify scientific jargon and brings difficult concepts to life.

“There are very few places like this in the world,” he says of AMNH. “We’re lucky to have it.”