A Classroom in Motion

Field work is a required part of SOC 304: Social Inequality and Class, which challenges students to compare the socioeconomic differences in two NYC neighborhoods by observing. 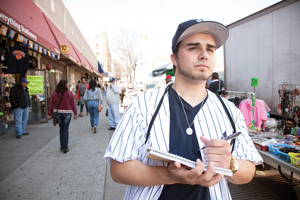 For Tony Capote ’17, a sociology and communication major from Miami, walking around the Washington Heights neighborhood of Manhattan on a sunny Saturday is a little like being back home. Latin music pours out of colorful storefronts, and vendors line the sidewalk with fruit stands, offering tastes to passers-by.

“This is a lot like the neighborhood I grew up in,” Capote says, as he observes a couple of men greeting each other with handshakes on the corner of 170th Street and St. Nicholas Avenue. “Hispanic people are naturally community-oriented,” he says. “You don’t even have to know someone to say ‘hi’ — just someone in their group of friends.”

This notion is part of what prompted Capote to choose to observe community interaction in both Washington Heights and on the Upper East Side as his field project for SOC 304: Social Inequality and Class, taught by Cory Blad, Ph.D., associate professor of sociology.

The course requires students to compare and contrast socioeconomic differences and how these differences manifest themselves in social situations in two New York City neighborhoods.

“Experiencing the diversity of New York City is the central goal,” says Blad, who lived in many different places growing up. “I come from a background of motion, and it becomes difficult to see what else is out there when the motion stops. This class structurally encourages them to see other parts of the city and paths less traveled. It teaches them that different perspectives exist, and they’re worth learning about.” 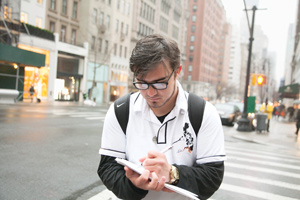 Capote focuses his Upper East Side study in a four-block radius of 740 Park Ave., an apartment building that is home to the highest concentration of billionaires in the world. Factoring in variables like weather and time of day, he carefully logs the number of interactions between pedestrians, and finds that many people keep to themselves.

The son of a psychologist, Capote says that he’s learned to watch people. He’s interested in journalism and hopes one day to be able to shed light on issues of social justice that matter, such as poverty and gender inequality.

While issues like these are the reason SOC 304 exists, in the classroom, Blad discusses topics such as observation strategy and helps students to refine their project ideas, encouraging them to be as creative as possible. What he doesn’t do is tell them what they’ll learn in the field.

“It’s hard to compare the difference of opportunity and the possibilities those present without actually seeing it,” he says. “The sheer diversity of New York City is just astounding. You see the world differently getting out of the classroom.”