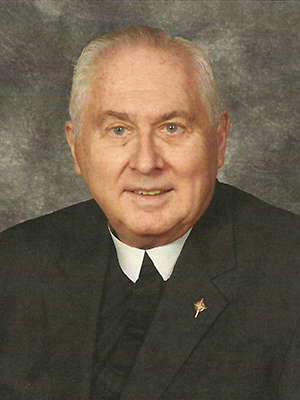 A native of Buffalo, Brother William Batt, FSC, Ph.D., professor emeritus of computer information systems, professor of chemistry and former director of admissions, died peacefully on April 28. He was 82.

As a member of Phi Beta Kappa, Br. William was awarded the medal of the American Institute of Chemists for scholastic achievement in 1954. He also received honorable mention for three consecutive years in the National Science Foundation pre-doctoral fellowship program.

His career with Manhattan College began in 1959 as an instructor of chemistry. Br. William later served as assistant, associate and professor of chemistry and also head of the department, and professor emeritus of computer information systems. His career with Manhattan College included extensive research on the study of the thrombin, a blood enzyme involved in clotting.

In 1972, the College named Br. William director of admissions. In moving from the faculty to the administrative position, Br. William believed that a veteran faculty member would best be able to  “rally the various constituencies of the College to help in the quest for top students.”

The funeral arrangements for Br. William include:

A viewing on Saturday, May 10 at St. Joseph Collegiate Institute (Cullen Center for the Arts, 845 Kenmore Avenue, Buffalo, NY, 14223) at 12 p.m. with a Mass of Christian Burial at 1 p.m. followed by a burial at Mount Olivet Cemetery (Kenmore, NY).