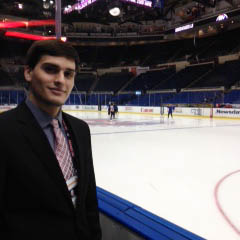 From fan to front-runner in four years, economics major Robert Bacchioni ’14 has worked with many of New York City’s top professional athletes.

During summer 2013, Bacchioni interned at the Major League Baseball (MLB) Office of the Commissioner. There, he worked on projects involving the legality and financial details of sponsorship to the coordination of the league through various resources.

Thriving in the fast-paced and demanding work environment, Bacchioni was able to interface with players and managers as well as travel on a regular basis — from the offices in Manhattan to Citi Field in Queens to Fenway Park in Boston.

Bacchioni then found a part-time position with The New York Yankees’ ticketing department through connections that he made during his internship. He deals with day-to-day operations and coordinating information for various groups that come to the stadium for games.

He also currently serves as a part-time intern for The New York Islanders where he aggregates game statistics from previous nights and compiles them for future use.

Bacchioni’s growing knowledge of the field has helped him face the hard realities of the field — there are few full-time well-paying jobs. It has led him to look elsewhere. A self-proclaimed math geek, he says he’s always been good at solving obscure and convoluted problems. This talent, honed over his years at Manhattan College, has made him an astute financial adviser.

He’s already made several contacts with Wall Street firms including New York Life at a recent campus career fair hosted by the Office of Career Pathways. After several callbacks, Bacchioni is currently in the process of interviewing, and he’s planning to stay at Manhattan College to complete a M.B.A.

He credits Natalia Boliari, Ph.D., assistant professor of economics, for affirming his pursuit of the field.

“[Dr. Boliari] helped me understand why things are happening, from a very hands-on perspective, by offering examples of issues that are happening today,” Bacchioni says.

“I’ve really enjoyed my time at Manhattan,” he adds. “It’ll be hard to leave but I’m really well prepared — I received a great education.”