Mariangela Petrone ’02, ’05 is a human resources professional for Montefiore Medical Center and a nationally recognized gift-wrapper for the likes of Oprah. 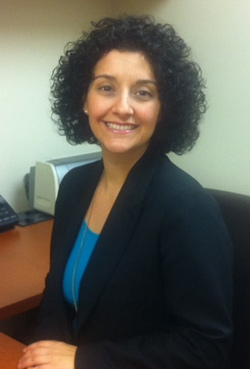 Mariangela Petrone ’02, ’05 (M.S.) knows that life doesn’t come in a neat little box. As a human resources (HR) professional and a national gift-wrapper, she takes it all in stride.

Bronx born and bred, Petrone is the youngest of five siblings, all first-generation Italian-Americans. Growing up on Arthur Avenue, she learned the value of hard work and the importance of customer service at an early age, first working at a local bakery and later at La Galleria, a Bronx-based gift shop her sister owned. It was there she honed her gift-wrapping skills.

Professional wrapping requires more than paper, paste and precision, it takes creativity. In 2010, after gaining local notoriety for wrapping odd-shaped gifts, Petrone decided to put her skills to the test at the 14th annual national gift-wrapping competition in Manhattan. Her multicolored decorative approach to wrapping an all-terrain vehicle earned her the title of Scotch Brand Most Gifted Wrapper, as well as a $10,000 prize.

Since then, she’s tried to keep a low profile, with little luck.

Last year, her talents garnered the attention of talk show mogul Oprah. Discovered by a third-party media firm for her bow-making talents, Petrone’s original work was featured on the anticipated December 2012 “Favorite Things” cover of O, The Oprah Magazine. In the same month, her growing web presence led to an opportunity at a Juicy Couture California Dreaming collection press event in Manhattan. She created the décor, as well as a three-minute intro to bow-making, that appeared on a prominent fashion blog.

But Petrone hasn’t quit her day job just yet. In fact, her position as a human resources business partner for Montefiore Medical Center, a hospital nationally recognized for clinical excellence, requires many of the same skills. In her role, it’s up to her to help smooth the jagged edges and loose ends that inevitably arise in the workplace and beyond.

With nearly 22,000 associates, Montefiore is the largest employer in the Bronx and growing. It operates in the business partner model, which means that the HR department participates in strategic planning to help the business meet present and future goals. So in addition to maintaining all the core functions of human resources — benefits, labor relations, recruitment, compensation and training — she contributes to the overall value.

Petrone admits that she covertly wraps and creates displays at work because, though she enjoys adding an extra flair to office functions, she’d much rather be known for her HR expertise among her colleagues.

Sometimes you’re presented with something that’s not a box, and you have to wrap it. This is where people get stuck. Just make something out of it. Make sense out of it.

She works closely with her business client, Montefiore’s vice president for facilities and real estate, to ensure both HR’s and facilities’ business strategies align with Montefiore’s strategic goals. It’s a particularly exciting time, as the hospital moves forward with the construction of a fourth campus. She is involved in workforce planning and training needs for the 11-story, 280,000-square-foot center that is scheduled to open in 2014.

After earning a B.A. in religious studies and peace studies with a minor in education in 2002, Petrone decided to continue her education at Manhattan by pursuing a master’s in counseling psychology. With experience as a resident and a grad assistant, she had the the opportunity to be an assistant director for Residence Life at just 22 years old.

Although her time at the College proved to be invaluable, she decided it was time to transition into the business world and chose a career in HR. Her first position was as an HR specialist at Montefiore. For five years, Petrone subsequently worked as an HR generalist for an international specialty glass manufacturer, SCHOTT North America, Inc. But, ultimately, she wanted to return to Montefiore and made the move in February 2012.

Although professional wrapping may seem like a random hobby for an HR professional, she argues that they are connected.

“When it comes to gift-giving, it doesn’t matter how much you spend,” Petrone says. “After you’ve taken the time and thought of the idea, you have to take out the wrapping paper, place the bow, and get into it. [Similarly] in HR, it’s all about the presentation. When you interview, when you give a presentation, when you write — anything.”

Her innate problem-solving skills come out when describing her biggest wrapping tip: When there’s no shape, make a shape.

“Sometimes you’re presented with something that’s not a box, and you have to wrap it,” she says. “This is where people get stuck. Just make something out of it. Make sense out of it.”

It’s this out-of-the-box methodology that makes Petrone the successful businesswoman she is today.