“Our first date was actually in Smith Auditorium,” says Lois Harr, pointing out her office window onto the Quad. “We saw the Players perform Pygmalion.” 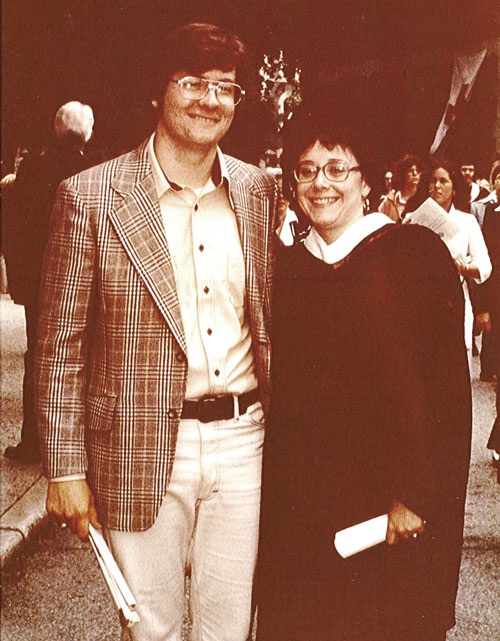 Lois is the director of Campus Ministry and Social Action at Manhattan College, but in 1976, she was a senior at Fordham who met a Jasper named John Reilly ’75 and fell in love.

The two were preparing to become community organizers in the Bronx, a borough that suffered the effects of crime, arson and neglect in the 1970s and 80s. Disbelievers told them to get “real jobs,” but their common passion for social action fueled a change. The couple helped residents find their voice and acquire basic services from the government — sanitation, schools, law enforcement.

So a few years after the couple married in April of 1978, they bought a house in Bedford Park and stayed local, tied to the borough not only by work, but by love and loyalty.

Those early days built the foundation for lifelong careers of social ministry. Today, John is the executive director of Fordham Bedford Housing Corp., which provides safe, affordable community-run housing for residents. Lois teaches a religious studies course at Manhattan and directs the College’s service efforts on and off campus.

“I think it has helped, even as our work has become different, that we understand it well, and why we each do what we do,” John says. “And there are some things that overlap. It helps us at home to have discussions.”

“We talk things through and we know each other’s underlying values,” Lois adds. “You really appreciate each other’s victories a lot more that way.”

One such victory was the creation of the Lasallian Outreach Volunteer Experience (L.O.V.E.) program at Manhattan College in 2007. When a chaperone backed out of the inaugural trip to Ecuador, Lois asked John to join them as they visited impoverished students at after-school programs and patients with leprosy at hospitals.

The eye-opening trip had so much impact on Lois and John, they’ve since traveled to Rwanda, Kenya and Palestine together to meet with Christian Brothers around the world and serve “the least, the last and the lost,” says Lois, quoting Br. William Mann.

Their two daughters, Caitlin ’05 and Maura ’09, have grown up learning to leave the world better than they found it. When Caitlin moved to New Orleans after Hurricane Katrina to help with the relief effort, Lois and John saw a bit of themselves in her.

Married 35 years this April, the couple is confident that there are more adventures to be had, and hope to continue their service-learning trips abroad.

“I’ve always thought it was a blessing to find somebody, to be so in sync with somebody,” Lois says. “In the big things, in the values and the general direction we’re going.”