With creators using new techniques to produce artistic content from home, five Manhattan College film studies students were inspired to create their short films, “New Day, New You” and “Captor” to showcase their talent and express their creativity while in quarantine.

Their film “Captor” won Best Horror Film in the New York City Quarantine Film Festival, competing against more than 100 other short films. “New Day, New You" won the People’s Choice Award in the FilmOneFest 24 Hour Film Slam, which held its event virtually this year, for the first time ever.

All five students are members of the Manhattan College Film Society. They began working together while producing their first film, “The Confession”, which won second place at FilmOneFest’s 24 Hour Film Slam in 2019. The filmmakers were informed about these unique festival competitions by Margaret Toth, Ph.D., professor of English and film studies and the advisor for the Film Society.

“I am so proud of them, not just for creating an effecting and visually compelling film but also for uniting during the pandemic and finding a way to surmount the challenges of making a film together while physically apart,” notes Toth. “What they’ve accomplished is truly astonishing.”

After their first win last year, the five students were subsequently inspired to create “New Day, New You” while participating in social distancing from their home states.

“We really weren’t sure how we’d make a film while being physically separated from another. During our first experience, we all worked on practically every aspect of the film together: writing, cinematography, editing, sound design, etc. We were all together pretty much every step of the process,” mentions Teresa Ramoni ’20.

Entrants in the FilmOneFest competition were required to adhere to three criteria when creating their respective films: a prop (shoe), a setting (bathroom), and a line of dialogue (“Has anyone seen my snack?”). Additionally, entrants must write, film and edit their film within 24 hours, and it must not be longer than two minutes. “To get around some of these challenges for ‘New Day, New You’ we had Google Meet planning meetings. Since my sister [Angela Ramoni] and I are quarantined together, we decided that she would act and I would film,” adds Ramoni ’20.

“I had never shot a film before, so Regan helped me a great deal by remotely directing—FaceTiming me and helping me achieve the types of shots and camera angles she envisioned for the film. She even filmed a few of the shots on her phone and sent me recordings so I could replicate them,” Ramoni ’20 mentions.

“Once we got the filming done, editing came into play. What was most impressive though was Jake’s work on the score. It changed the game and really pulled everything together,” says Regan Alejo ’22. “We each have different talents to bring to the table and plenty of passion to fuel us so we got into a rhythm fairly quickly,” Alejo ’22 adds.

The group committed to implementing elements of horror due to their interest in the horror film class they took together. “We’re very interested in ambiguity, in giving our viewers the opportunity to draw their own interpretations of what they’ve watched, leaving them with questions”, mentions Ramoni ‘20. “As we’ve learned and discussed in class, that’s the true power of cinema, to start a dialogue.”

The New York City Quarantine Film Festival was created in order to promote creativity and the art of filmmaking during the COVID-19 pandemic, and is sponsored by Inwood Art Works. The festival requires that films be under three minutes in length and that the production crew must adhere to social distancing guidelines while filming.

“For our first film competition we were together all day while making the film,” notes Sharon Egan ’22. “This time it was a bit of a struggle having the whole team ‘on standby’ all day to work through any problems and make decisions about shots and little things. I think we’ve really learned about the importance of communicating.”

Film studies students become skilled at analyzing films and making connections between these motion pictures and the world we occupy. 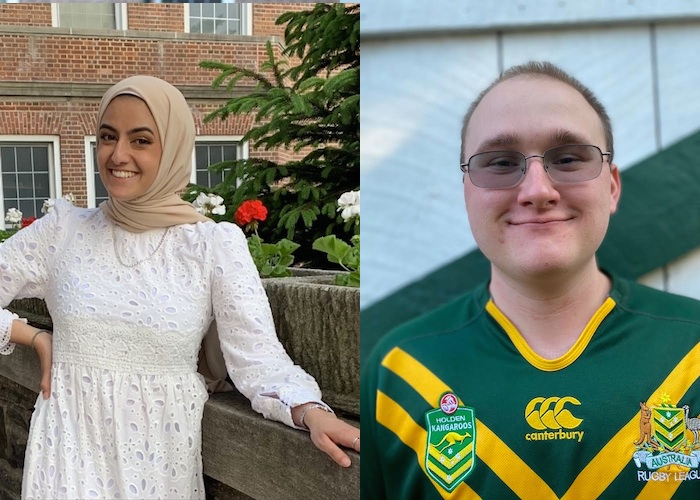