It doesn’t always take a village to raise a child. In the case of this year’s Summer Literacy Institute, it took a community – a Manhattan College community – of faculty, administrators and alumni, who each drew upon their individual talents to equip more than two dozen low-income teens in New York City with the tools to succeed in the future. And they made learning fun. 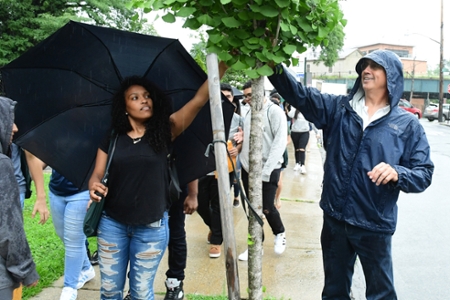 These academic modules, as well as the numerous cultural excursions that took place during the experience, were facilitated by the Center for Academic Success, which founded and has been leading the program since 2010.

At its core, the Institute’s goal is to create a semblance of what it’s like to take part in campus life (i.e. living in the residence halls, waking up for class, preparing for exams, etc.), so that students can envision themselves in that environment. Its purpose is to also help them navigate the college application process. To assist in that area, the students met with Tiffany Corbett, who serves as assistant director of Admissions and Financial Aid.

In its entirety, the program’s mission is directly in line with that of Manhattan College, which lauds concern for the poor and instills a dedication to offering a quality education for all those who seek it. Many of the teens who are chosen to participate in the Institute may not otherwise have the resources or advisement to undergo the often rigorous college application process. Offering that support results in a lasting difference for all involved, according to Marisa Passafiume, Assistant Vice President for Academic Success.

“[The program] really speaks to what the Lasallian mission is – providing a quality education to all students who need it, and expecting nothing in return. They’re able to learn with us for a week and take that knowledge back home to their families,” she says.

But learning occurs inside the classroom and around New York City, which is why Passafiume and her team organized visits to the Metropolitan Museum of Art and the Rubin Museum of Art. Additionally, the students caught an evening production of A Bronx Tale on Broadway.

The Academics and the Culture

In their varying methodologies for reaching the New York City teens, Manhattan professors got creative at this year’s Institute.

For his segment, Judge led a walking tour of Van Cortlandt Park, where they were instructed to collect leaves they would later inspect for patterns that distinguish between different species of trees. This exercise fostered acute observational skills. Bollert related experiences from the students’ lives to explain Plato’s ideologies on wisdom (“Knowledge is a necessary condition for wisdom, but not a necessarily sufficient condition for wisdom.”), and Kaplan illustrated the importance of taking organized class notes with a relatable comparison to iPhone technology.

In conjunction with an engaging lecture that focused on Buddhism, Kaplan headed a field trip to the Rubin Museum of Art. In the downtown Manhattan space, the students were able to view art from Asian cultures that are influenced by the religion. This helped them to visualize its impact on a global scale, and connect to its principles in a more personal way.

“[We] want to reinforce the idea that education is cultural, and also to offer the New York City experience, which is a core component of a Manhattan College education,” says Kaplan, who has taken part in the Institute since its beginning.

During the past seven years, his curriculum for the week has evolved. A course that previously acted as a pared-down version of the Introduction to Religious Studies course he teaches at the College, RELS 110, is now more focused on skill development. During a lively first meeting with students, Kaplan followed a real-talk conversation about what it takes to be successful with useful tips on efficient note-taking, and how it can mean the difference between a D and B on an important exam or paper.

“I want you to know your notes as well as you know the location of each application on your iPhone,” he said. To monitor their progress in accomplishing this task, Kaplan’s lectures concluded with a quiz and later, a review session, to pinpoint areas that need improvement.

Kieran Rock ’17, a former English major at the College, was one of five current students and recent graduates serving as the Institute’s student mentors. He, along with Rachel Gerard ’17, Jessica Risolo ’17, Daniel Ynfante ’17, and Rima Reda ’18 were tasked with guiding the rising high school seniors to their classes throughout the week, resolving any issues related to their living in the residence halls, and acting as chaperones on trips to the city.

Glessner, the Learning Specialist at the Center, was happy with the achievement she saw throughout the week.

“I had the pleasure of guiding a group of high schoolers as they brainstormed, drafted and collaborated during the process of writing their college essays. Some of the students nurtured a passion for writing, while others uncovered writing talents they didn't know they had. The students had so many valuable things to say, and they finished the week off with polished pieces of writing,” she says.

Passafiume, who helped found the Institute nearly a decade ago, believes that the effects it has on the high school participants are just as long-lasting as they are for the instructors.

“When I do the training for our student mentors and writing teachers, I remind them, ‘You can’t forget that this experience isn’t only changing the lives of the students.’ If one out of 30 decides, ‘I can do this,’ and they’re empowered, that changes generations going forward,” she says.