During the summer of 2016, two Manhattan College juniors researched the environmental effects of exposing portions of the Saw Mill River to sunlight. 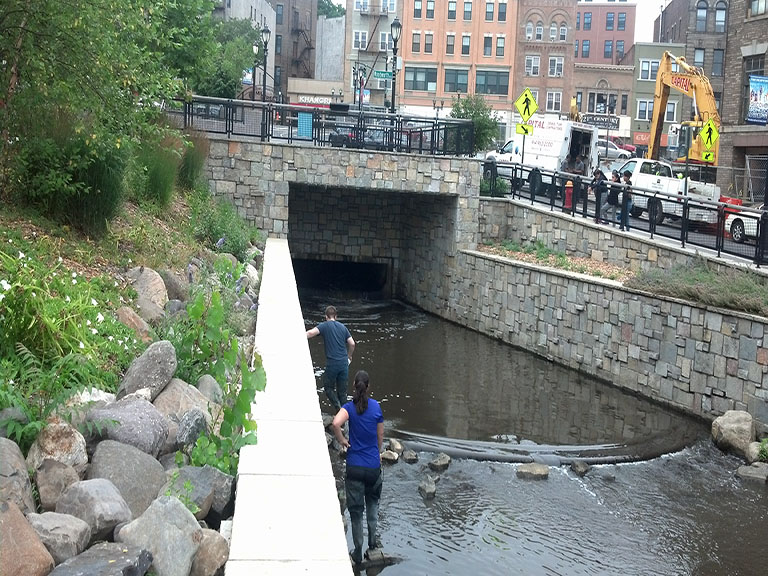 Liliana Calix ’18 and Michael Frugis ’18, two Manhattan College students raised in Westchester, immersed themselves in the Yonkers community last summer to conduct research that examined the water quality of the Saw Mill River. To complete their study, which focused on the effects of a process known as daylighting, Calix and Frugis partnered with Kevin Farley, Ph.D., a professor in the environmental engineering department.

Inspiration for the research, which was drawn from her internship during the spring semester with Groundwork Hudson Valley,  Calix knew she wanted to learn more about the effects of daylighting – which reveals portions of a river that had been previously covered by concrete and exposes it to sunlight  – on the Saw Mill River.

This restoration helps improve environmental quality, and also opens up the area for community development and growth. There had been a gap in data from 2012, when the river was uncovered, to date. The students wanted to see if the water quality changes were as noticeable as the community enhancement from the daylighting project.

In his research, Frugis sought help from the environmental engineering department's Farley, who encouraged teaming up with Calix to assess the water quality improvements of the Saw Mill River.

“I knew that the parkway was named after it,” Frugis laughs as he recalls his pre-research awareness of the Saw Mill River.  After analyzing extensive past research projects, he had a more robust knowledge of the urban stream.

Their goal was to follow up with Richard Carbonaro, Ph.D. ’97, a current professor and College alumnus who completed research on daylighting in the Saw Mill River as a graduate student preceding the campaign in Yonkers.

The study was conducted during a three month period with four separate sampling days. Following this period, the students found conclusive evidence that there was a drop in bacteria in the first phase of daylighting in the river.  This is also the last portion of the river before the Saw Mill enters the Hudson River.

“As you get downstream, your bacteria drops significantly before it enters the Hudson River, so you don’t want the Saw Mill River to be so contaminated that it's now flowing into the Hudson River,” says Calix, who credits her internship with Groundwork as a contributor to this project as well.

She worked directly with colleagues to help with obtaining information, and contacted engineers who worked on the project.  The Manhattan students plan to share their data with Groundwork for added assistance on future projects related to the Saw Mill River.

“Just because they daylighted the river, it doesn’t mean they’re done; there’s still more improvements that could be made and more corrective actions that could be added, like redirecting storm water pipes or separating combined sewer overflows,” says Calix.