The event took place on campus on Thursday, April 7.

Watch a video about the windows’ journey to Manhattan College:

Brother Gustavo Ramírez Barba, FSC, Ed.D., received an honorary doctorate of pedagogy degree at the event. Br. Gustavo is the General Councilor for Lasallian Higher Education at the Institute of the Brothers of the Christian Schools. He is one of seven General Councilors who “have as their mission to strengthen communion and interdependence in the Institute.” He has served as the executive secretary for the Lasallian Latin American Region and as a regional director for the Mexican and Central American Universities of the International Association of Lasallian Universities.

The De La Salle windows were created in the early 1900s by the renowned French workshop of L. Mazuet et fils of Bayeux. L. Mazuet et fils was founded in 1858, and both father, Leon-Louis, and son, Henri, were students of the Christian Brothers in the late 1800s. Their work can be admired in the ancient churches and magnificent cathedrals of France, including Eglise Notre-Dame et Saint-Marcouf in Basse-Normandie. 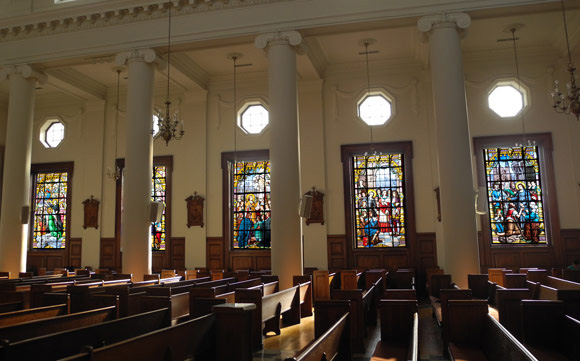 The windows were originally installed at the Christian Brothers’ Novitiate in Pocantico Hills, New York, and were moved to the chapel of the Brothers’ Novitiate in Barrytown, New York in 1930. They were reacquired in 2015, through the joint effort of Manhattan College and the District of Eastern North America of the Brothers of the Christian Schools. After a yearlong process of restoration by Rohlf’s Stained and Leaded Glass Studio, they were installed in Manhattan College’s Chapel of De La Salle and His Brothers in early 2016, and were dedicated on April 7 - the Feast Day of Saint John Baptist de La Salle.

Watch a recording of the Windows Dedication: