Winners Megan McKee ’17 and Daniel Hey ’19 will develop their respective startups with the expert feedback and $250 award from the event. 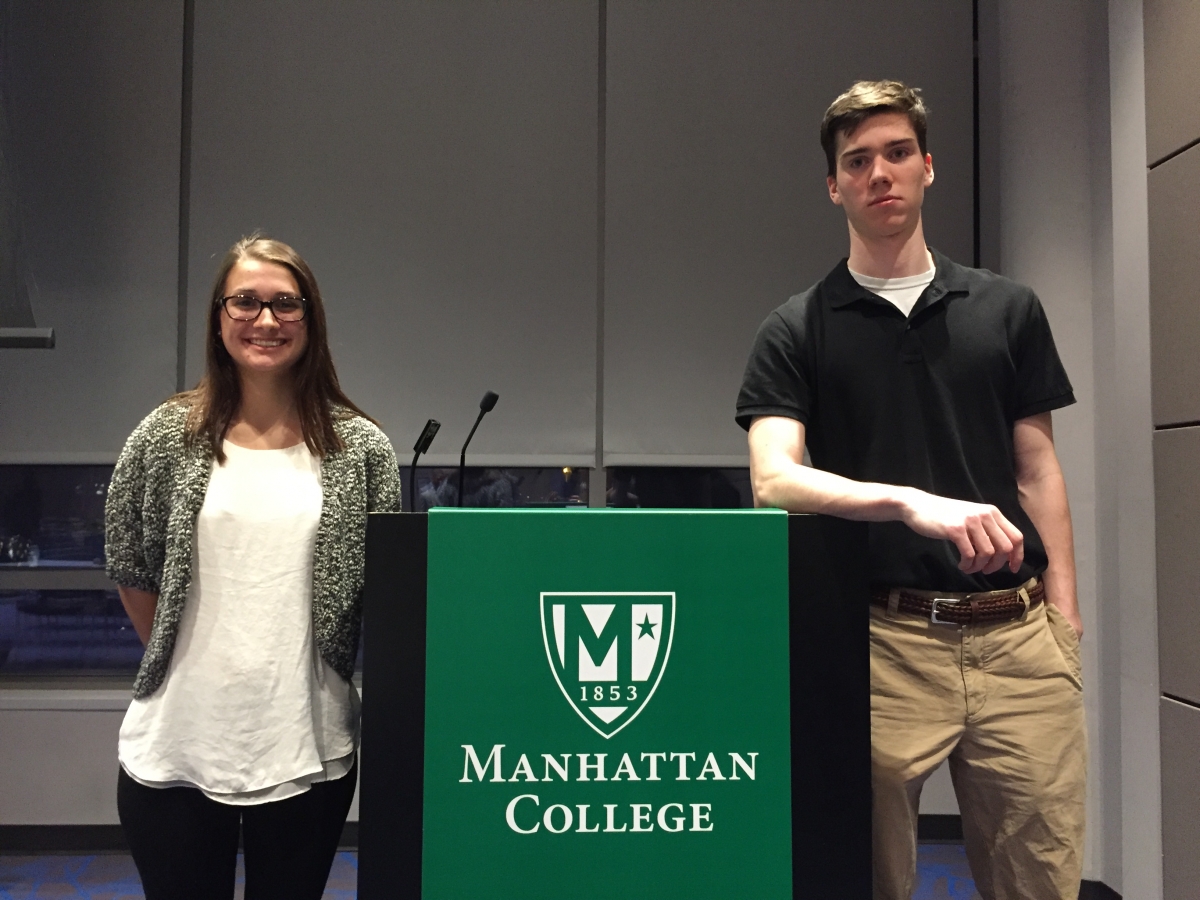 That was a key takeaway at Manhattan College’s 2016 Innovation Contest, where the two winners, Megan McKee ’17 and Daniel Hey ’19 drew inspiration from their own frustrations.

The competition, now in its third year, invites teams of students from across the College to pitch their ideas and business startups to a panel of eight faculty, alumni and entrepreneurs — a format familiar to fans of ABC’s reality show Shark Tank.

Selected teams presented their business plans on March 8, vying for the grand prize of $250. And for the first year ever, there were two winners: one in the category of business and the other for social responsibility.

McKee, a double major in marketing and global business, won the social category for her Global Aid Kit, designed to encourage the ease of consumer preparedness. Each kit provides small, TSA-approved items to address the specific needs of a traveler based on his or her destination. For instance, a traveler going to Africa will have a kit that includes DEET insect repellent, water purification tablets, and oral rehydration packets.

As a thrill-seeking globetrotter, she has often found herself spending exorbitant amounts of time and money visiting doctors and purchasing over-the-counter medications abroad. Even if she remembered everything, luggage space was always an issue.

“I figured, there has to be a simpler, more convenient way,” McKee said. “Packing is stressful enough as it is, and it’s so common to overlook important necessities. Extensive research and analysis is making it possible for these kits to take into consideration the needs of each individual traveler’s destination and activity level.”

Finance major Hey won the business category for his mobile app Angel Ventures. It brings angel investors — those who provide financial backing for small startups or entrepreneurs — to the mobile world so virtually anyone with a smart phone can invest in early-stage startup companies before they go public.

“The inspiration came from the fact that I plan on being a venture capitalist and/or an entrepreneur once I graduate,” Hey says, noting that it’s difficult for young investors to get their ideas noticed. “Earlier during my first semester, I wanted to think of an idea that combined these two fields, and that is when I thought of Angel Ventures.”

Both Hey and McKee plan to put their winnings toward developing their products. However, the feedback they received from the judges may prove to be even more valuable.

“It was a great opportunity to receive critical feedback on my progress thus far,” McKee says.

Hey adds, “I got to see how the judges reacted to the different styles of presenters, and I think that will help me going forward if I do have to present again.”

Their advice to future entrepreneurs?

“The best ideas are the ones that come to you naturally,” Hey says, noting that it’s best to jot down ideas — however small — that come to you immediately. “Start thinking about it in terms of marketability and the business model with any idea you have. It’s during this that you'll discover the flaws and the viability of the idea, and if you want to pursue it, first make sure it doesn't exist already. Then create a business summary you can show someone else for feedback.”

“Be driven; be competitive,” advises McKee. “There are no ‘participation’ trophies in the real world — success is earned not given. Never take no as an answer from someone who doesn’t have the same vision and beliefs. Stay humble, prove them wrong, and know the world doesn’t owe you anything.”