Manhattan College President Brennan O’Donnell and Brother Jack Curran ’80, FSC, the College’s vice president of mission, attended the service, honored to be among the crowd that greeted and prayed with Pope Francis on the first stop of his 36-hour tour of New York.

“Evening prayer at St. Patrick’s was inspiring and moving,” O’Donnell reflected. “The majority of the people in the Cathedral were religious: Sisters, Brothers and priests. And Pope Francis’s homily, on the theme of gratitude and hard work, was really an extended ‘thank you’ to them for all that they do to minister to others in the midst of what he called ‘evolving pastoral circumstances.’ He encouraged them to continue to see life as God’s gift, and to continue to respond to that gift with the desire to serve — to give to others.

“The emotional high point of the homily was his special recognition of women religious. ‘Where would the Church be without you?’ he asked, and ended by telling them: ‘I love you very much.’ I was sitting in a section surrounded by women religious, many of whom were overwhelmed both by the Pope’s words and by the thunderous applause that broke out in support of his affirmation. After a decade in which Rome’s attention to women religious has been mostly negative, his words were a breath of fresh air and a sign of hope.”

A member of the Brothers of the Christian Schools for more than 35 years, Br. Jack has lived his life in service to others. He has had the opportunity to be in the presence of several religious leaders during his lifetime, but recognized Thursday’s service as a special one.

“The atmosphere in the streets of downtown New York City as well as inside St. Patrick’s Cathedral that evening was similar to the festive and pleasant atmosphere that one senses on Christmas Eve in your own family, neighborhood and parish.  Perhaps in many ways, that makes sense. It seems only right that there would be a similar feeling on both of these evenings as the commonality is that we are anticipating the presence of God among us in a most unique and intimate way.

Indeed, at Saint Patrick’s Cathedral during evening prayer with Pope Francis, it was palatable that, as we Lasallians often recall, we were in the Holy Presence of God. The way in which Pope Francis carries himself, seeing him within three feet of my own eyes, catching the glitter in his eye, feeling as those around me also felt, that he was looking ‘right at me’ with that warm and affirming smile — yes, we were in the Holy Presence of God that evening in a most unique and intimate way.”

Christine Murphy '12 and Courtney Slack '14 work behind the scenes during the Pope's Ground Zero visit.

Praying with families of victims of the 9/11 attacks at New York City’s ground zero memorial and speaking at an interfaith service, Pope Francis offered faith in a place of fear.

Behind the scenes of what were arguably the most touching moments of his U.S. visit were Christine Murphy ’12 and Courtney Slack ’14, current staff members for the 9/11 Memorial Museum. It was an experience of a lifetime.

Both Jaspers, new to their positions as of July, describe the experience as “baptism by fire.”

Murphy, former account executive at the PR firm Edelman, serves as a researcher for the 9/11 Memorial Museum. She helped coordinate media for the event, from managing the museum’s social media to serving as liaison to broadcast news teams shooting pre-event features.

Slack served as a group sales associate for the museum until recently transitioning to her role as event assistant. She worked with city agencies to ensure the highest security standards, from assisting the New York Police Department with street closures to assisting the Secret Service with guest credentials.

It was “all hands on deck” until the final moments, but as Pope Francis arrived, they witnessed months of careful preparation transform into history before their eyes.

“I was up at the South Pool when he was arriving on site,” Slack says. “Watching him finally walk across the pool with Cardinal Dolan and watching the blessing — it was an awe-inspiring and humbling moment.”

Murphy was at the interfaith gathering tasked with filming the event on Periscope, a live-streaming video mobile app.

“It was definitely a crazy experience to be about 30 feet away from [the Pope] and taking a video for our followers to see,” Murphy says. “It was kind of surreal but it's going to be an experience that I remember for the rest of my life.”

Attending the service was interfaith leader Mehnaz Afridi, Ph.D., assistant professor of religious studies and director of the College’s Holocaust, Genocide and Interfaith (HGI) Education Center. The event served as a forum to connect with religious leaders and community organizers to discuss future challenges and opportunities. Afridi called the event “exquisite.”

“Having the prayer of all faiths with the Pope was amazing,” Afridi says. “The fact that the Pope called us his prophets was a beautiful thing. It was really empowering for us as Muslims. This is what’s needed right now in terms of healing and empowerment for all of us. Let’s heal and not stop.”

Murphy and Slack are still reflecting on the events as they adjust to a slightly slower pace at work. The last few months have been full of many experiences and discoveries for which they’re both thankful. (Although their time at Manhattan overlapped, they first met at the museum.) They have amassed loads of professional experience, and now share a workplace and alumni network, as well as a spiritual experience.

“I still can't even really get over it — his message allowed everyone to come together and put aside their differences and focus on peace and harmony,” Murphy says. “It was the kind of experience that I will never forget. I am so grateful I was able to be a part of it.”

Lucky lottery winners catch a glimpse of His Holiness.

“I’m on my way to see the pope. Just looking for a blessing, man,” one New York businessman said into a cell phone Friday as he approached the west side of Central Park.

That afternoon, he was one of some 80,000 people — several of which included Manhattan College students and alumni — who came from all walks of life to brave the crowds for a single purpose: a possible glimpse of Pope Francis, also called Papa Francisco or the “people’s pope,” before he made his way to evening mass at Madison Square Garden. His “popemobile,” a white Jeep Wrangler ensconced in bulletproof glass, cruised from 72nd to 59th Street after a visit to Our Lady Queen of Angels School in East Harlem.

Fiona Dunn ’17, a sophomore at Manhattan, was among the throng of lottery ticket winners who came to Central Park and were star struck to be in the presence of His Holiness. Accompanying her was her mother, who trekked from New Jersey.

“It was truly a once-in-a-lifetime opportunity to be present to welcome Pope Francis to New York City,” she said while turning to leave the papal procession. “I could feel the graciousness of his holy presence as he smiled and waved to the crowd.”

Forty members of the Manhattan community participate in a faith-building experience.

At 2 p.m., 40 students and College leaders arrived for the evening Papal Mass at Madison Square Garden to find a mile-long line stretching from 34th to 23rd Street, traveling from Seventh to Eighth Avenue, and ending in circuitous confusion. Rather than finding an outraged crowd, the Manhattan College cohort found themselves among an eager, smiling community — senses of humor intact — who were thankful to be among the 20,000 ticketholders. 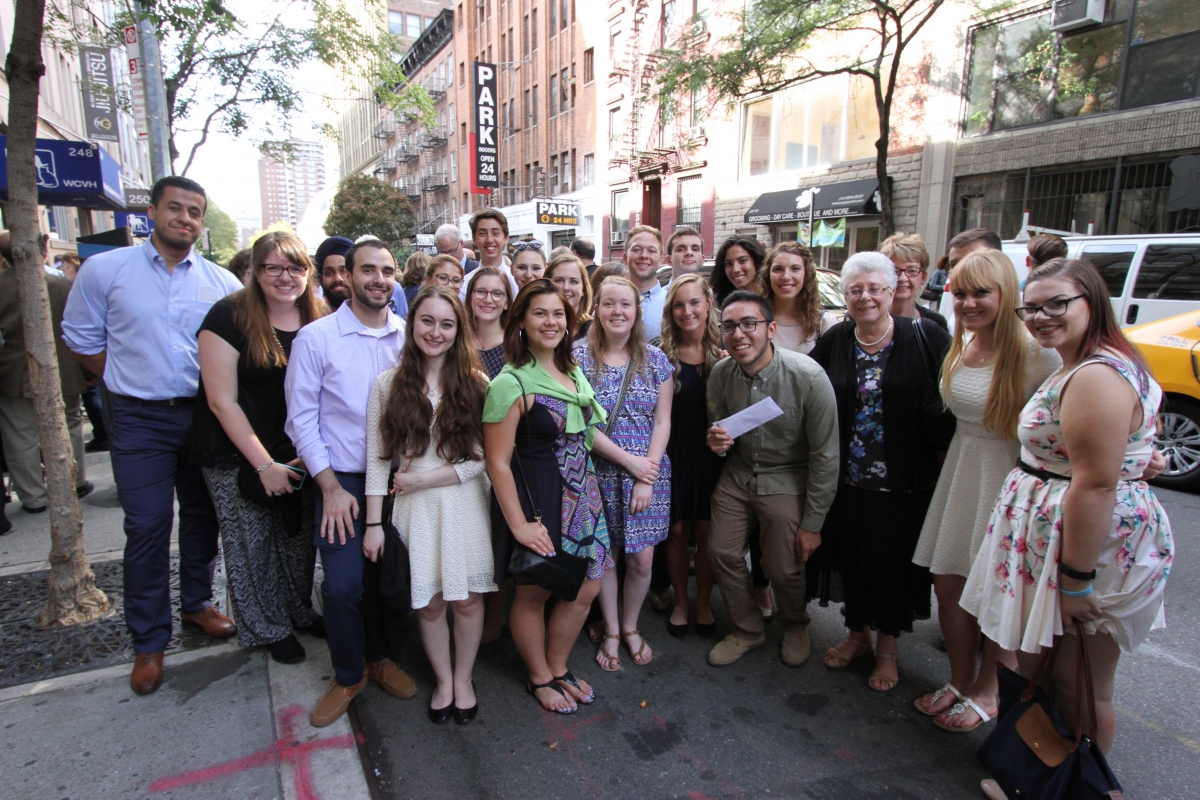 Standing in line, students sipped water and ate pretzels while discussing their expectations and hopes for the Papal Mass.

“I feel like I identify with [the Pope] because he's from Latin America; I'm from Puerto Rico, he's from Argentina, so he speaks Spanish the same as me,” said Victoria Hernandez ’18, a communications major. “He’s the first Pope that I've really followed — he's the one who has interested me the most. I think the Mass is going to be a fulfilling experience because I am Catholic, but I also think seeing the Pope isn't just an experience that you're going to have in your life; I believe this is historic.”

“My summer research project kind of went hand-in-hand with that, so I was really excited for [his U.N. address] and just the chance to see him in person,” Hoey said. “I know he's not going to talk about all of this stuff at the Mass, but just to know that there's someone out there who has a lot of the root causes in mind and is doing so much to spread the word, it’ll be a really good experience.”

The group’s patience was rewarded: they found their seats just as the people’s pontiff entered the iconic New York City arena waving and smiling. Thunderous applause gave way to a reverent silence — stunning for a crowd so large — as the faint clink of the swinging thurible ricocheted across the vast arena: the Mass had begun.

In his homily, Francis emphasized points he made throughout his U.S. trip, but took the opportunity to discuss the virtues and failures of big cities, noting that they bring diversity and culture, while also shunning some individuals.

Delivering one of the prayers of the faithful was Tom Moran ’74, chairman and CEO of Mutual of America, and well known for his charitable work with organizations such as Concern Worldwide. 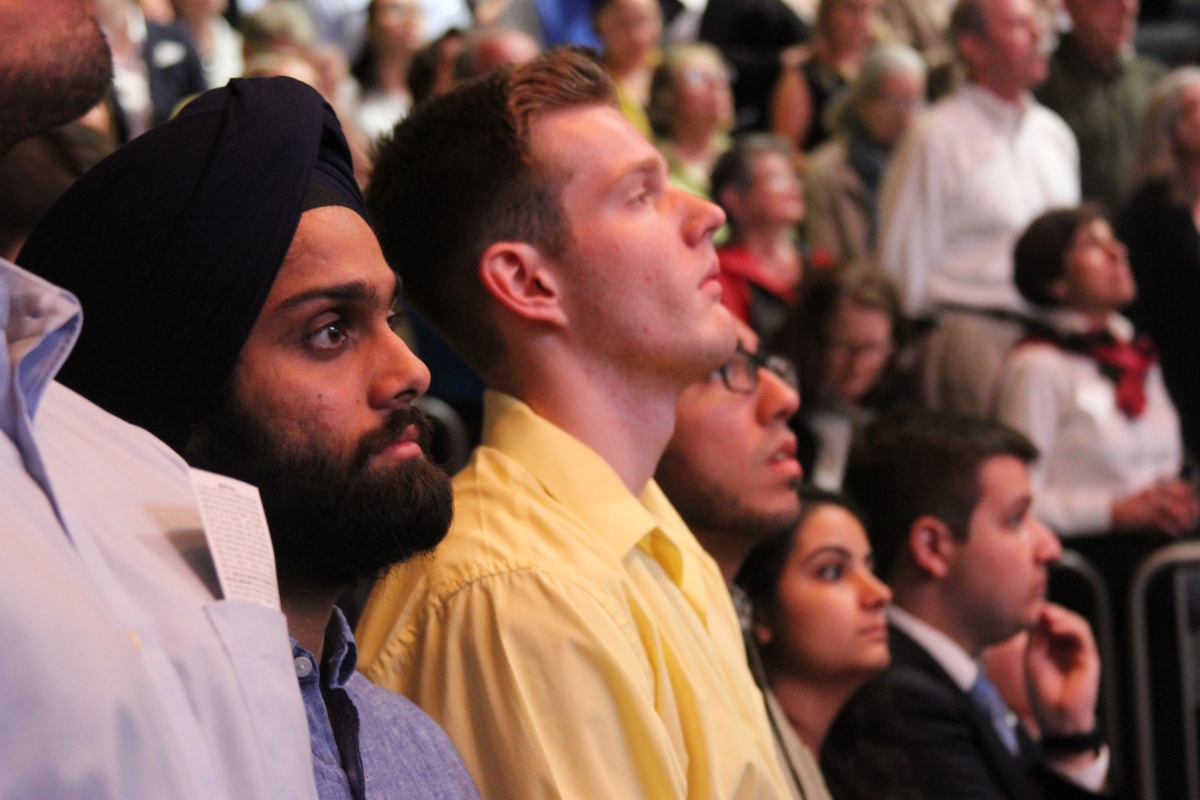 About 200 deacons and 150 volunteers assisted Pope Francis in distributing Holy Communion. After Communion, Cardinal Timothy Dolan, Archbishop of New York, and Manhattan’s 2012 Honorary Degree Recipient, offered a personal welcome to Pope Francis from the people of New York City. “Every single day we pray for Francis, our pope, and now here you are!” he proclaimed, to thunderous applause and cheering.

Pope Francis concluded the service with the customary “go in peace to love and serve the Lord” and added, “Please, I ask you, don’t forget to pray for me.”

As he left the building, students reflected on the power of being in the presence of the Pope.

“I'm a little bit in shock — it's just incredible to be here,” said Samantha Coggins ’18, a civil engineering major. “I came to college thinking that I would do amazing things like get a $20 ticket to a play or the opera randomly, but being able to come to Mass with the Pope is actually a once-in-a-lifetime opportunity.”

Coggins saw the Dalai Lama last year and discussed the experience in a religion class, saying that seeing two religious leaders in two years has helped her consider the similarities across faiths and denominations.

“It’s amazing — everything is about loving and caring for each other,” she said. “I cried at the [sign of] peace. I just turned around and looked at 20,000 people hugging and shaking hands. I'm blessed. And I'm not even Catholic and I'm blessed.”

As the shock of the experience gives way to a holistic perspective, Nelson da Luz ’15, ’16 ’17 (M.S.), described the Papal Mass as a faith-building experience.

“While in line waiting to get into Madison Square Garden, I saw many people that I know from different parts of my life,” he said. “My faith is always strengthened when I see so many people in pursuit of the same goal. In going to see the Pope, I felt the importance of following his example in the pursuit of growing in personal holiness. To pray with and for others in the presence of the Pope was a humbling and edifying experience.”

“In his homily, the Pope focused on the idea that God is alive in our cities and that even amidst darkness there is light,” da Luz adds. “His words will encourage me and remind me to try to be an example of this light to those I encounter in my daily life.” 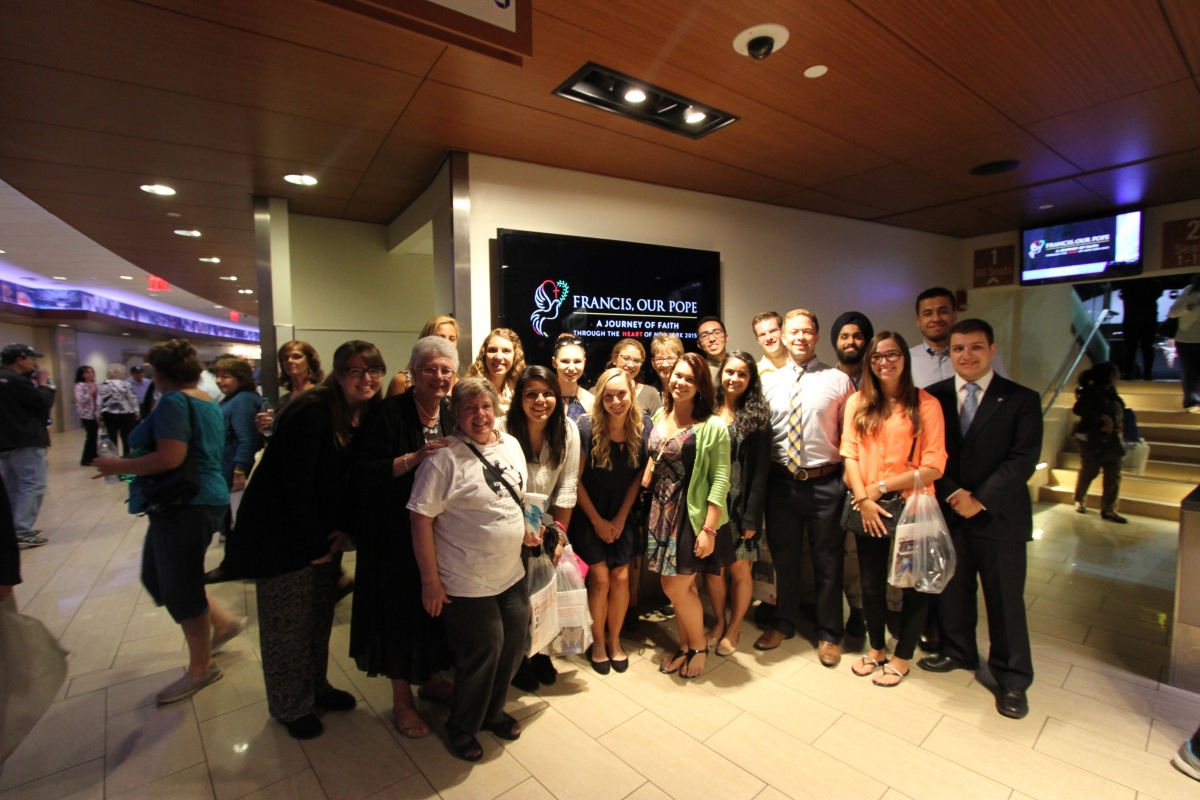