During a collaborative course with Universidad La Salle in Mexico City, 12 engineering students engaged in service projects that helped further their understanding across cultures and curriculums. 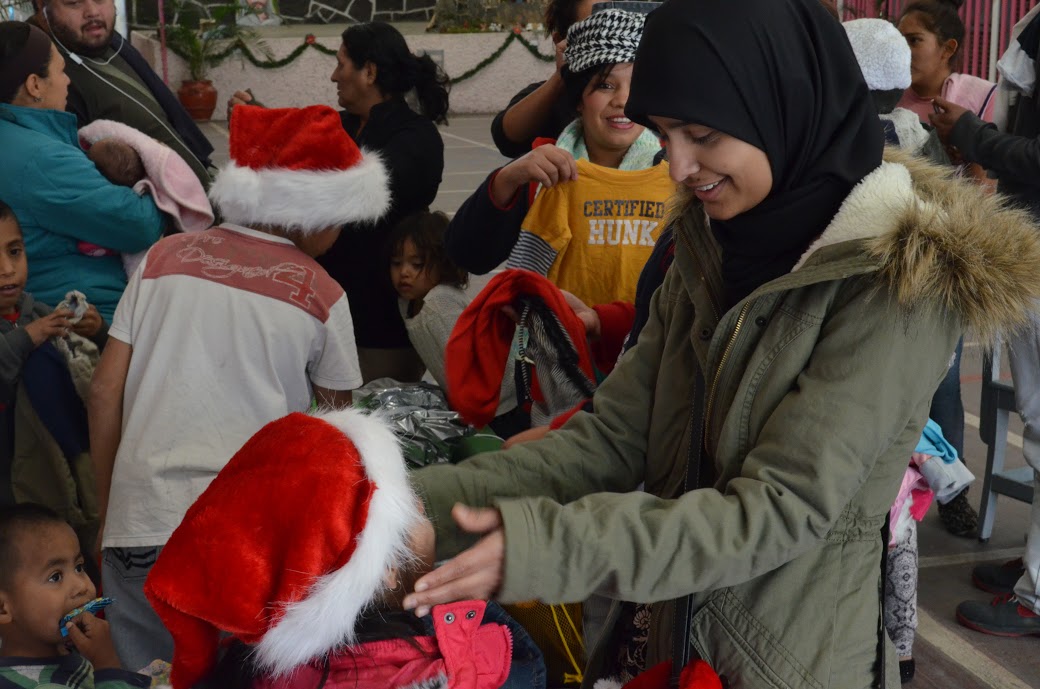 “El Dia de Reyes” or Three Kings Day is a special holiday in Mexico that commemorates the three wise men who traveled from afar, bearing gifts for the infant baby Jesus. This year, 12 students from Manhattan College’s School of Engineering celebrated the holiday by giving gifts of toys, clothing and safe drinking water to refugees in Mexico City.

This transformative experience was part of an 18-day, three-credit study abroad course, Transport Phenomena, led by Dr. Gennaro Maffia, professor of Chemical Engineering. The trip was chaperoned by chemical engineering administrative assistant Kathy Ciarletta, and hosted by Universidad La Salle in Mexico City. Student participants from La Salle and Manhattan came together not only from different cultures but also from diverse academic disciplines — biology, pharmaceuticals, as well as chemical and civil engineering — to study the development of mass, energy and momentum transport equations.

As members of the global Lasallian community, the cohort of students, faculty and staff felt it was important to participate in a service experience during their stay. As such a connection was made with CAFEMIN, a housing and training center for the empowerment of indigenous and migrant women. In addition to the donation of toys and clothing, the group delivered and installed a Sawyer filtration system thanks, in part, to using donations to the Chemical Engineering department.

“CAFEMIN already had a filter, but it was a small Brita filter on the kitchen sink,” said John Barrios ’15. “The one we installed is a large, ten-inch filter that has capacity of up to 50,000 gallons of potable water a day. Additionally, this filter was located on the mainline on the roof so water will be now distributed throughout the community. That is a big improvement.”

Part of the challenge was retrofitting the existing piping network to make use of rooftop reservoirs. Both Barrios and Sebastian Garcia ’15, both fluent in Spanish, and others including the maintenance staff at CAFEMIN identified the appropriate placement of the filtration system and developed a protocol for operation and back flushing. This opportunity was unique in that it combined the concepts of service in the Lasallian tradition with the skills they have learned as part of their curriculum of studies.

In addition to potable water, the group donated toys and clothes, and painted foursquare and hopscotch designs on the community’s outdoor pavement.

“The refugees and staff at CAFEMIN were so appreciative of everything that we were able to do for them,” said Melissa Sullivan ’16, a graduate student in Manhattan’s Chemical Engineering department. “Most of us couldn’t speak Spanish but all the little kids, when we were working, wanted to be around us and were watching and trying so hard to communicate.”

Inside the classroom at Universidad La Salle, a big portion of the students’ attention was focused on learning how to use ASPEN-HYSYS, an essential computer process simulation program, to solve their transport problems.

“I had a crash course in ASPEN-HYSYS before, but Dr. Maffia is an awesome teacher,” says William Han ’15, a chemical engineering major who participated in the course. “I learned much more about ASPEN-HYSYS, and I feel confident using that software now.  If I ever work for a big process intensive company such as Exxon in the future, I will need to use that software a lot.” Because the version of HSYS was different than the version that students use every day at Manhattan, students pulled together to find the corresponding codes/instructions on the different version of the software.

Friendships emerged from classroom collaboration and were further solidified as the La Salle students introduced their Manhattan cohort to Mexican culture, from playing soccer and watching a live wrestling match to sampling the local fare. As a group, they visited main tourist attractions of the city, such as Xochimilco, Ciudad Universitaria, the Shrine at Guadalupe and the Pyramids of Teotihuacan. They also spent a weekend in Puebla, where they visited a ceramic factory that produces Talavera, a type of white glazed maiolica pottery.

The experience was so positive that the College is currently working with Universidad La Salle to broaden exchange opportunities for students in the future.

“Before going, I heard all these horror stories because of the way the media portrays Mexico,” says Sullivan, noting that Manhattan’s pre-departure info sessions helped her acclimate to the area quickly. “I felt so safe being in Mexico City, and I’d recommend it to anyone to go there. The country is so beautiful and has so much to offer.”